Author:
Warren Mosler
Date Published:
03/11/2013
Soft Currency Economics is the little book that could logically, in both real and nominal terms, legitimately challenge many of the core held beliefs of the mainstream classical and neo-classical schools of economics. 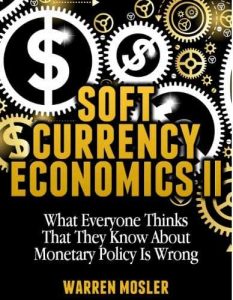 Soft Currency Economics is the little book that could logically, in both real and nominal terms, legitimately challenge many of the core held beliefs of the mainstream classical and neo-classical schools of economics. It is a corner stone publication for the new, widely popular fresh approach to economics that has come to be called Modern Monetary Theory (MMT). It explains with actual facts, not theory, and with non-technical language, the true operational realities of our monetary system (central banks and private banks).

The author, a 40 year ‘insider’ in monetary operations, and a very successful fixed income hedge fund manager, wrote this book in 1993 after witnessing the markets drastically discount sovereign debt on the errant belief that market forces could force nations into default on debt payable in their own currency, and that austerity was the only solution. This was contrary to the author’s understanding of what are called fiat currencies, where governments always have the ability to meet all obligations in a timely manner.

As a result of this experience, the author took up the task of educating government officials on how the monetary system operated with the hope that with this understanding they would be free to ensure that the government acted for the public purpose and achieved their stated goals of full employment and price stability. Initially published in 1993, this book will utterly convince many readers that what they thought they knew about monetary policy is wrong.