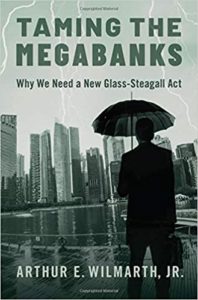 Congress passed the Glass-Steagall Act of 1933 in response to the Great Depression. The Act broke up universal banks and established a decentralized financial system composed of three separate and independent sectors: banking, securities, and insurance. That system was stable and successful for over four decades until the big-bank lobby persuaded regulators to open loopholes in Glass-Steagall during the 1980s and convinced Congress to repeal it in 1999.

Congress did not adopt a new Glass-Steagall Act after the Global Financial Crisis. Instead, Congress passed the Dodd-Frank Act. Dodd-Frank’s highly technical reforms tried to make banks safer but left in place a dangerous financial system dominated by universal banks. Universal banks continue to pose unacceptable risks to financial stability and economic and social welfare. They exert far too much influence over our political and regulatory systems because of their immense size and their undeniable “too-big-to-fail” status.