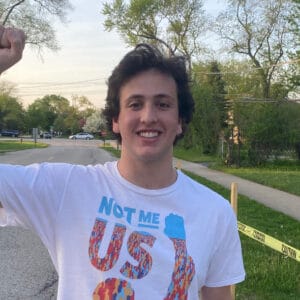 My name is Zach Schimel and I am a 17 year old political organizer. I became passionate about politics during the Bernie Sanders campaign in 2020. I bought into Bernie’s message of putting working people first and ending the political and economic oligarchy in the United States. This summer I gave a speech at the March For Medicare For All in Washington D.C. and I will continue fighting for the people in the future.

In the 2008 Presidential Election Barack Obama promised change. He laid out a vision for The United States that put the interests of the working and middle classes first. In fact, one piece of the 2008 Democratic Party Platform read “We will provide immediate relief to working people who have lost their jobs, families who are in danger of losing their homes, and those who – no matter how hard they work – are seeing prices go up more than their income. We will invest in America again –in world-class public education, in our infrastructure, and in green technology –so that our economy can generate the good, high-paying jobs of the future. We will end the outrage of unaffordable, unavailable health care, protect Social Security, and help Americans save for retirement.” Sounds like Obama planned on putting the people first, right? Well, workers in the Rust Belt and Midwest who had been most affected by the outsourcing of jobs and general neoliberal economic policy thought so too. However, after 8 years, many corporate bailouts, a pharma-approved healthcare bill, and even more concentration of wealth for the ruling class, it was clear to Americans that Obama was anything but a populist. The DNC embrace of identity politics and globalism, along with their rejection of populism, left the working class behind.

Significance of the 2016 Election

Due to the Democrats embrace of neoliberalism, workers from the rust belt and Midwest were back on the table for candidates in 2016. So how did candidates captivate them? We know that calling them “deplorables” and dismissing them as useless racists won’t do the trick. But idiotically this was the official approach taken by the DNC and the Clinton campaign. There were two methods of resistance to this narrative. One came from Bernie Sanders, and the other from Donald Trump.

Bernie’s campaign attempted to pin the rage of the working class on the growing oligarchy in the US. He pointed to wealth inequality, lack of universal services for everyday Americans, and the dark money causing our government to work in the interests of the private capitalist class as problems that he would fix. Of course, this is the right approach. Those denying working class Americans better lives are those who profit off ensuring their struggle. Bernie pointed out many American truths: we don’t have single payer healthcare because politicians are lobbied by Big Pharma and insurance lobbyists, we get involved in wars because our politicians take money from the military industrial complex, and that, generally, our government is corrupted by and therefore works for only the wealthiest Americans. This was a true populist platform, and as expected, many working class people bought in. However, this platform scared the DNC. It challenged their neoliberal economics by putting working people first, and it challenged their power as wealthy political elites. So they did everything they could to destroy Bernie. They called him a sexist, a racist, and utilized their corporate owned media outlets to push pro-Clinton identity politics; their elitist mirage barely succeeded.

In ensuring Bernie’s failure, the DNC pushed the rural working class, who they’d made clear had no place in the mainstream of the party, over to Donald Trump. Unlike Bernie, Trump was funded by business elites. Therefore instead of attempting to unite the working class, Trump set the working class against each other. He turned the rage of southern workers against immigrants, rather than toward the business owners who replaced the American workers with immigrants in order to pay lower wages and increase profits. Instead of using the rage against identity politics to bring workers together, he used it to drive them apart. He used the liberal vs conservative culture war to galvanize support.

Although many workers now believe that Trump is anti-elite, this is not actually the case. He is simply anti-liberal. Trump has distracted the working class from uniting to realize that their enemies are the ruling class, not each other. In preventing this class unity in a time when conditions are so ripe to see it, Trump has worked to ensure the oligarchs remain in power.

How do we bring the working class together?

With class infighting caused by both the Democratic establishment and Donald Trump, we must do everything we can to bring the working class together. The reality is that no matter their social ideology, all working class Americans share in the class struggle. We all need food on our table, high quality healthcare, housing, and education, freedom from living paycheck to paycheck, freedom from being exploited by landlords and our corporate bosses, and a government that works for us rather than the business elites. 71% of Americans support labor unions, 68% support a wealth tax, 67% support a $15 minimum wage, and 55% support a single payer public healthcare system. We must place those policies, as well as the following, at the center of the workers’ movement.

If we hope to build an America that works in the interests of the working class, then we must transcend the partisan culture war and come together around working class issues. Because if we fight united on these economic issues we will see our country transformed into one run by us and for us. When we show class unity, the ruling class will fear our movement. As fellow Americans we must lift each other up, stand in solidarity against oligarchy, and work towards a country by and for the people. We desperately need this brand of worker populism. It is the only thing that can save us from the neoliberal nightmare of today. It is possible, but only if we’re willing to stand together to make it happen.

8 thoughts on “Building the People’s Movement”