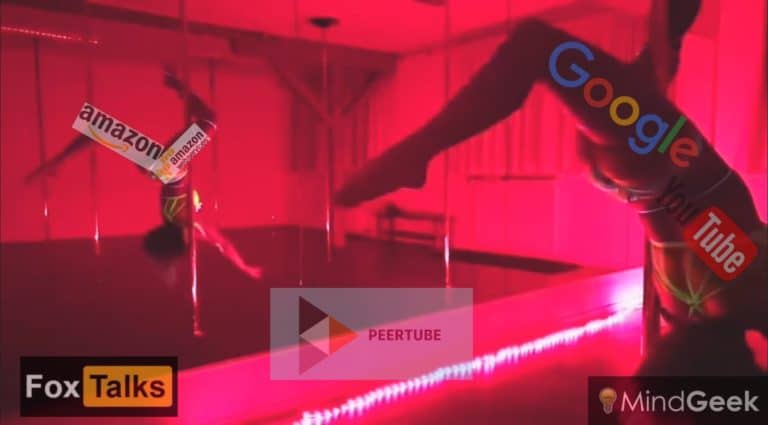 Whoopi: “Since you were how old?”

Knox: “Since I was twelve years old.”

Whoopi: “And so you know that what freaked a lot of people out is that you said you were empowered, which I totally got, but I’d like for you to explain to people why you felt that way.”

Knox: “Well, I’d like to first clarify that empowerment and degradation is completely subjective and for me I feel that in this backdrop of a society where women are so often robbed of their sexual autonomy and are subjected to sexual violence, the backdrop of, you know, misogyny against women it’s incredibly liberating and freeing for me to, um, have that choice to make in decision about my own body.”  This is a point that Knox elaborates on in a piece she wrote for XOJane which seems to have been taken down since.

It’s also worth mentioning that Belle also did a long interview with Piers Morgan on CNN around the same time, and, in it, Piers really comes off as a judgmental dinosaur and Belle, to her credit, breaks down his prejudice with eloquence and reason. It’s a little weird, but with the original article taken down, one of the few internet traces of it to exist is Morgan reading a paragraph of it live on CNN.

And what if I told you it didn’t have to be this way? It’s scary because she isn’t in control, of the situation, or the narrative. She doesn’t really control the means of production. So, what is the other way? Is it… socialism? Not yet, but we are getting a lot closer already.

In addition to stealing the business model and even source code from Google, Mindgeek and similar platforms are fueled by piracy and some really problematic hosting practices. For one, across their sites, they host a lot of stolen content, but more shockingly, videos of actual rape, underage performers, and revenge porn. On one hand, with as much content as is uploaded to their platforms daily it’s going to be nearly impossible to stop some of this stuff from getting through, but they aren’t trying very hard at all. Some rape victims have had to sue Mindgeek to get videos of their rape taken down. Though by the time it is, it could easily have been downloaded again and reuploaded, which might require a separate lawsuit to take down, and this is generously assuming the first lawsuit makes them do anything at all.

Perhaps worse, in a story that reminds me a lot of Amazon’s online sales empire, piracy is baked into the business model, and in early years was an effective negotiating tactic as they were building their vertical monopoly.

We’re in Hell: “The big issue with Mindgeek is their hosting of pirated content. Like I said, this is how tube sites started out. Imagine if Spotify started as Napster, but also still was Napster. And this is an important part of how they were able to take over the industry. Not saying that this is a conspiracy or anything, but when “Manwin” the company that would later become Mindgeek was first negotiating with foreign producers who might not want to accept whatever offer they were making. Manwin, because they still host pirated content, could basically say to them, ‘Look, your stuffs gonna wind up on our site? Either way, you take our deal, at least you’ll make something off of it.’ Again, I’m not trying to put any conspiracy theories out. I don’t believe that that was a literal conversation that anyone at Manwin or Mindgeek ever had with anyone. But that dynamic is absolutely why Mindgeek was able to dominate the industry.”

If that doesn’t remind you of the tactics that Amazon is using to establish resilient online vertical monopolies within their store, you just aren’t paying enough attention to Amazon.

Before I move on, I feel like I should point out that as many issues with Mindgeek as there are, they’re not so different from a company like YouTube in most ways that matter. In fact, YouTube can be worse than Mindgeek in many of these issues. And like I noted, and as many performers would agree, Mindgeek pays a lot better than YouTube.

Like YouTube and other free websites, Mindgeek collects a whole lot of your personal data. We’re In Hell: “Once again leading the way in technology, tube sites gather data on everything you do and everything you watch. . hese sites know things about your sexual preferences that you don’t know. Mindgeek has data on what clothes you think are hottest, what positions turn you on, and even what furniture layouts make you nut the hardest.”

I know, it sounds weird to be talking about owning the internet because internet culture is a beautiful anarchism that feels as though the internet belongs to everyone. Even the “property rights” right won’t respect Facebook’s right to tell them to shut up and get off their lawn. The truth is, the internet is owned in a similar way to land, though we aren’t inclined to think of it that way. To own a plot of internet, you need servers and a certain level of web services and tech support.

Most companies don’t invest in buying internet real estate, instead renting space from a wealthy landlord. A recent, high profile example of this is Parler being kicked off of Amazon Web Services after a contractual dispute about their moderation practices. This is where the real money comes from on the internet, landlordism and rent-seeking behavior, and the two biggest property owners are Amazon and Google. This is the economic backbone of each respective company, and it’s what allows them to take the risks and chase long term gains by wasting money to cripple their competitors. No matter what website you do business with or visit online, you can bet the owner of the site is paying one of these two companies or their subsidiaries for web hosting or services.

By now you may have noticed that even if I didn’t have videos hosted by Mindgeek this would still apply to me and likely applies to you in some way as well. When we make money online, we will in some way end up paying rent to Google, Amazon, or both, in addition to the fees of a lot of online media hosting platforms like Vimeo or SoundCloud. Until we collectively own internet real estate as well as our own online distribution platforms, we don’t really own the means of production, even though making money like this makes us feel like independent petit bourgeoisie business owners. But we aren’t really as independent as we think because we’re still in effect working in a virtual Google or Amazon owned factory that’s invisible to us.

The good news is that the desire for a more open-sourced internet is absolutely alive and well, though a lot of online companies and platforms shamelessly profit from the use of open-source software, there’s also the potential that this could make creating our own community owned and operated platform pretty easily and in such a way as to be both very adaptable and quite professional as well.

There’s also the issue of replacing the role of Google and Amazon by supplanting their servers and web services with a community sourced alternative. This might all sound complex, and it is, but to me it’s more true to what the internet should be. There are several platforms and distributed servers in operation to host different things, but one that stands out to me as a great example of everything I’m talking about is Peertube.

PeerTube was created by a web developer known as Chocobozzz as a peer-to-peer alternative to YouTube, utilizing the WebTorrent protocol to share videos and the ActivityPub protocol in order to allow decentralization and to make it more resilient against censorship. Chocobozzz was contacted in 2017 by Framasoft, which had a campaign called Contributopia, the goal of which is to create alternatives to centralized platforms. In order to support him and his work, notably on improving the design and usability, Framasoft hired Chocobozzz.

Each PeerTube instance provides a website to browse and watch videos and is by default independent from others in terms of appearance, features and rules. Several instances, with common rules (like allowing for similar content, requiring registration) can form federations, where they follow one’s videos, even though each video is stored only by the instance that published it. Federations are independent from each other and asymmetrical: one instance can follow another to display their videos without them having to do the same. Instances’ administrators can each choose to mirror individual videos or whole friend instances, creating an incentive to build communities of shared bandwidth.

The system works via a federation of instances run by independent entities. Each PeerTube server can host any number of videos by itself and can additionally federate with other servers to let users watch their videos in the same user interface. This federation permits collectively hosting a large number of videos in a unified platform, without having to build an infrastructure comparable to that of the web giants. Each server is operated by and stays under the sole administration of a distinct entity.

I don’t know if I’m ready to move over to Peertube exclusively yet, but I think I’ll make my own instance and host videos that have been censored by other platforms there because I have so many of them. I also think that I’ll donate some money to help crowdfund their efforts, and if this idea sounds like the socialist future of YouTube, then maybe you can chip in $5 yourself.