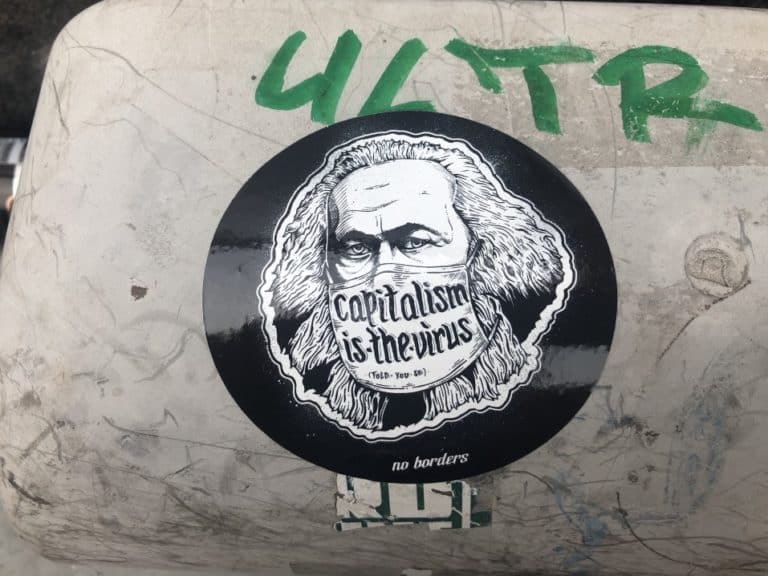 There is probably no intra-Left discourse that people are more tired of than the question of identity politics. But exhaustion with the question should not be mistaken with resolution. We have explored the vampire castle: some of us have exited it and others have claimed it as a fortress. But the differences are deeper than that, they are etched with nuances due to differences in definition and vision. It is not uncommon to hear, as I just heard on a podcast, people discussing the subject give a disclaimer of “I’m not one of those anti-identity politics people.” Of course, the old joke is that if you say something like “I’m not a racist but…,” you’re probably a racist, and similarly the people who tend to try to separate themselves from “anti-identity politics people” are themselves people critical of modern identity politics and simply embarrassed or even disgusted by the alternatives put forth by their fellow critics. And from urging people to not address race in politics after the murder of George Floyd to denying racial disparities in deaths and other harms of the COVID-19 pandemic, there is plenty to be embarrassed by. But again, if you stake out your position on the subject by saying that you are not XYZ, well that doesn’t tell us much about what you are.

I have written a lot over the last few years that is critical of, and tries to understand the genesis of, modern identity politics, particularly with a thesis that modern identity politics are individual aesthetics that have been sublimated into capitalism’s broader project of creating the ideal consumers. The ideal consumers are the polar opposite of the ideal workers — the ideal consumers have varied interests and tastes to allow a thousand market niches to bloom. We live in the world of Amazon, where you cannot find an affordable healthcare insurance plan but you can find t-shirts for obscure old video games, a QAnon baby bib, and shoe laces for perverts. Even the surly antifa super soldier can find 860 “communist” fashion items to placate their desire to show off their identity. Hell, if you’re a classic Nintendo RPG loving furry communist dad who believes that an international cabal of pedophiles runs the world, you can get one of each so each contour of you is visible to the world.

Of course self-expression is nothing new, including political self-expression. Makeup (by people of all genders) is one of the oldest rituals of humans, predating things like agriculture and domesticating animals, while anyone who has watched any historical fiction movie knows that soldiers tend to have some identifying marker on a breastplate, helmet, or shield.

What has changed is the level of individuality and perceived-uniqueness to each person’s own self-expression. Even expressions of political identity as recent as the Black Panther Party’s outfits and open-carry public presence were about expressing a collective political identity rather than an individual one. What we think of today as individuality is a fairly novel concept and one that has been shaped primarily by capitalism. Our generalist and highly social species evolved to persist by cooperation, and cooperation requires empathy and identifying with your fellow humans.

Now this should not be confused as an equitable state of affairs. Feudalism is a highly social system of economic and political organization that requires not only cooperation but mass sublimation of individuality, particularly of the peasants, in allegiance to the Church and various monarchs. Nor did capitalism shatter any sense of collective political identity upon its emergence, or even upon its gain of global hegemony. After all, capitalism has progressed through endorsements of collective identities it finds useful to its own interest, most infamously nationalism and white supremacy. However, capitalism’s innate nature, its inherent tendency to atomize everything as it permeates everything, is why the more capitalism has progressed the more individual identity has taken prominence in culture, economy, and politics. As György Lukács wrote in “Realism in the Balance”:

Primitive economies create the superficial appearance of great unity; primitive-communist villages or towns in the early Middle Ages are obvious examples. But in such a ‘unity’ the economic unit is linked to its environment, and to human society as a whole, only by a very few threads. Under capitalism, on the other hand, the different strands of the economy achieve a quite unprecedented autonomy, as we can see from the examples of trade and money — an autonomy so extensive that financial crises can arise directly from the circulation of money. As a result of the objective structure of this economic system, the surface of capitalism appears to ‘disintegrate’ into a series of elements all driven towards independence. Obviously this must be reflected in the consciousness of the men who live in this society, and hence too in the consciousness of poets and thinkers.

It is not totally clear why Lukács puts “disintegrate” into scare quotes. But, to hazard a guess based on the context of this “disintegration” being more clear to people during crises as the autonomous are drawn back together, it appears the point is that the disintegration is more a perspective than a material. This is also hinted at by his reference to “the surface of capitalism” rather than just capitalism. And most importantly, it is a compelling illustration of the dissonance between the supposed limitless individuality portrayed by capitalism and the increasing commonality of people outside of the capitalist class, both within the United States and outside of it. The process that Marx called “proletarianization” has been felt more in the last decade than in the previous three as the always illusory middle class vanishes. While income and wealth inequality climb higher and higher, the differences between the three lowest quintiles become smaller as the higher ones keep pace in a race to the bottom.

And yet class identity is fractured almost infinitesimally by individual conceptions and notions. The clear lines demarcated by a political theory like Marxism have been replaced, even by its alleged adherents, by subcategories and other divisions that see no “working class” but instead hundreds of classes within the traditional idea of working class. Sure we can all have a laugh when someone on Twitter makes a ridiculous claim that baristas, professors, and teachers are not working class, but it is no laughing matter when more conservative unions try to distinguish their blue collar and higher paid workers as some true “working class,” or conversely when contractors from gig workers making less than minimum wage to venture capitalist vultures are lumped in together based on certain shared legal status.

This has happened with more than just class identity. The aim of an African diasporic and globally Black identity is a noble goal of a collective Black identity that has been fought tooth and nail by both white supremacy and those who have benefitted from more circumscribed notions of Black identity. It was not that long ago that there were debates about whether Obama was really the first African-American president, and the stark generational divides in recent elections, especially the Democratic primary, show that even a collective Black U.S. identity struggles to find coherence. That is not to say that any difference within a collective identity is enough to render it moot, but rather it becomes moot or is at least threatened when those differences make the collective action that forges collective identity impossible.

Infamously, the electoral behavior of white women in particular in the last two general elections has raised questions of whether there is a collective political woman identity. Notably, many of these white women are more than just dissenters from the overall political orientation of women against Trump, but moreover identify themselves as Women for Trump. Similar subdivisions have been made along every conceivable line of identity, fracturing it into Trump and not-Trump components.

But what are the actual differences here beyond aesthetics (not just of appearance, but also of language and other means of expression)? Polling (as far as any of us trust it anymore) consistently shows that American working people, for better or worse, tend to agree on things like healthcare and wages and yes, “identity politics.” What differences do exist tend to be across lines of collective identity rather than individual identity, and this means, as people like Marx have long argued, the interests of working class people (a collective identity, even if rarely recognized nowadays) are far more aligned than different.

When people on the Left take issue with “identity politics,” it tends to be when individual identity or identities usurp collective identity, and it has frankly been a shame that some of the Left have just abandoned a concept as hefty as “identity” when it has always been the kind of identity that is harmful. When we criticize “black faces in high places,” it is a criticism of “black political power” meaning select Black individuals having power rather than Black people as a collective having power. When we criticize “pinkwashing,” it is a criticism of LGBTQ identity being in service of LGBTQ individuals and others rather than LGBTQ people, including LGBTQ Palestinian people, collectively.

Trump was defeated this election by a very loose collection of people united simply by opposition to Trump. As he recedes further and further into the background, a vacuum is created for how we think about ourselves politically: both whether we think of ourselves as individuals or part of a collective and whether we think of ourselves based on what separates us or based on what unifies us. Diversity and unity have never been incompatible. Defining ourselves by a collective political identity does not mean sacrificing our individuality, nor does it mean we cannot define ourselves by multiple political identities. What it does mean is when we think about confronting political issues, we think about it as part of a whole rather than as an individual, even an individual especially effected by the issue. As the Combahee River Collective famously advocated: “Although we are feminists and Lesbians, we feel solidarity with progressive Black men and do not advocate the fractionalization that white women who are separatists demand.”

This “fractionalization” can feel as unavoidable as gravity when it is pushed for by 24/7 media (corporate and social), by some of our comrades, and by our human limitations, challenging capacity for empathy when someone is not near us or strange to us despite our similarities. But we have no choice but to fight against it, and as its pressures are felt constantly we must push back against it constantly. We must make our own organizations more democratic, we must resist the allure of anecdotal politics, and we must practice politics of care for one another that are not dropped when arguments get heated or we as individuals do not get our way. It is so much harder to do this now in the time of COVID-19, where the screens that connect us are also barriers to our empathy, where constant communication is devoid of faces and other reminders of our collective humanity. But these have always been the struggles of popular movements for social change, and we can triumph over them if we take the first step of consciously reorienting ourselves to collectivity and away from individuality.