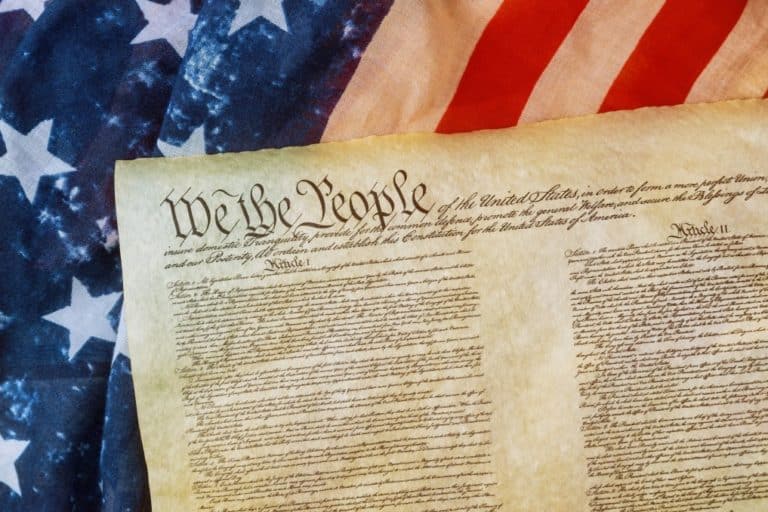 The very existence of police is a violation of the most literal interpretation of the Second through Fifth Amendments. In addition, police serve to violate the First through Eighth Amendments systematically and consistently in function.

Congress shall make no law respecting an establishment of religion or prohibiting the free exercise thereof; or abridging the freedom of speech, or of the press; or the right of the people peaceably to assemble, and to petition the Government for a redress of grievances.

A well-regulated Militia, being necessary to the security of a free State, the right of the people to keep and bear Arms, shall not be infringed.

No Soldier shall, in time of peace be quartered in any house, without the consent of the Owner, nor in time of war, but in a manner to be prescribed by law.

The right of the people to be secure in their persons, houses, papers, and effects, against unreasonable searches and seizures, shall not be violated, and no Warrants shall issue, but upon probable cause, supported by Oath or affirmation, and particularly describing the place to be searched, and the persons or things to be seized.

No person shall be held to answer for a capital, or otherwise infamous crime, unless on a presentment or indictment of a Grand Jury, except in cases arising in the land or naval forces, or in the Militia, when in actual service in time of War or public danger; nor shall any person be subject for the same offence to be twice put in jeopardy of life or limb; nor shall be compelled in any criminal case to be a witness against himself, nor be deprived of life, liberty, or property, without due process of law; nor shall private property be taken for public use, without just compensation.

In all criminal prosecutions, the accused shall enjoy the right to a speedy and public trial, by an impartial jury of the State and district wherein the crime shall have been committed, which district shall have been previously ascertained by law, and to be informed of the nature and cause of the accusation; to be confronted with the witnesses against him; to have compulsory process for obtaining witnesses in his favor, and to have the Assistance of Counsel for his defense.

In Suits at common law, where the value in controversy shall exceed twenty dollars, the right of trial by jury shall be preserved, and no fact tried by a jury, shall be otherwise re-examined in any Court of the United States, than according to the rules of the common law.

Excessive bail shall not be required, nor excessive fines imposed, nor cruel and unusual punishments inflicted.

A creation of now-President Joe Biden’s, civil asset forfeiture, is a direct attack on and nullification of the Fourth Amendment’s protections against search and seizure of assets. Police departments can, have, and will literally seize assets, property, and other things of value, regardless of conviction or public welfare. A single study found at least 68.8 billion dollars’ worth of goods seized by police between 2000-2019. Even further, those seizures did nothing to fight crime.

Given that the SCOTUS has ruled, several times, that the police are under no obligation protect anyone who isn’t already in police custody and that police only solve about 2% of crime, it tracks that police seizure of private citizens personal property didn’t do anything, really, except hurt the same people police always hurt: black, brown, indigenous, and poor white people.

Even before the passing of laws like Florida’s new, shiny, and fascist, “anti-riot” bill, police have always served to silence dissent. The blacker and/or louder (read: more radical) the dissent, the more brutal the crackdown. From weapons banned by the Geneva convention (tear gas), to “less-lethal” baton rounds (aka rubber bullets) fired improperly to maximize damage, the police will always use extreme, reactionary methods of retribution. The police function to eliminate any real semblance of freedom of expression.

Given that the arms of the justice system routinely use DAs as tools to coerce people into waiving their rights to a jury in exchange for a seemingly favorable sentence, it should be nakedly obvious how cops and the whole system of policing routinely and regularly violate the Fifth through Seventh Amendments.

From DUE PROCESS DENIED: JUDICIAL COERCION IN THE PLEA BARGAINING PROCESS by Richard Klein:

“And judges may well believe that in order for defendants in future cases to know that the judge indeed means business when he or she threatens ‘the max’ the judge must make it crystal clear at sentencing time:

One might well expect that there would be a successful appeal of a sentence such as this, based on the claim that the sentence was excessive in that the judge’s initial assessment of the appropriate punishment was one-tenth of the sentence imposed, but appeals courts know how the game has to be played to get the desired result of the pre-trial plea of guilty. “

Given that the police are literally an occupying militarized force with a national cumulative budget that is third in the world for national military budgets after the US, followed by China, they clearly qualify as a ‘military force quartered in peacetime’.

And remember, while federal policy influences police structure and federal budgets trickle down in some ways to state expenditures, your state isn’t a currency issuer. In the United States, only the federal government is. Ergo, all the wasteful spending on occupying regime forces, I mean cops, literally is wasted tax revenue. As a refresher, federal spending is not constrained by federal taxes, only real resources and unemployment.

When it comes to the second amendment, cops literally get away with murder simply by stating they “suspected” someone had a gun. That’s all it takes, especially if the murdered person is black or brown.

Author’s note: There aren’t names being listed above because if you don’t already think of several black and brown people who’ve been killed in cold blood by police, you need to do some research and soul-searching.

This means that, in practice, the only people with a right to bear arms are those who are rich and/or politically aligned with fascist forces like cops.

Author’s note: For additional reading on this topic, I highly suggest my good friend’s article located here. In addition, while a long, well-sourced argument is beneficial, Delegate Lee Carter makes a very similar argument in a nutshell in this thread.