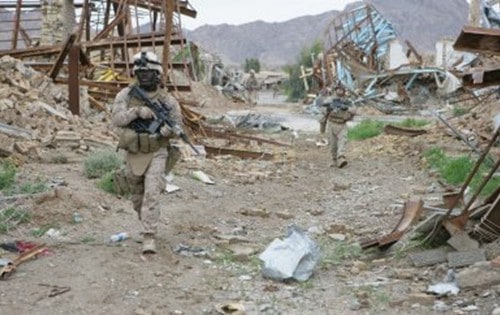 The post 9/11 wars have, so far, cost about a million lives directly, according to Brown University’s Costs of War project, with millions more having died indirectly because of “water loss, sewage and other infrastructural issues, and war-related disease.” These crimes against humanity have already cost more than 8 trillion dollars, with the blood of soldiers and citizens alike floating it back to Wall Street. Unlike money, the total harm we caused is immeasurable, and it has only just begun.

Money is and has always been a creation of law, spent and then taxed by governments (and their chosen agents), in order to control how resources are used. The old ‘guns versus butter’ from basic macroeconomics. While there are very real decisions to be made, the idea that society must operate at less than our full potential because of supposed money scarcity or the imagined inflation boogeyman is parroted propagandic foolishness. But, if the government could provide full employment, healthcare, good education, housing, etc., why do they not?

To answer that question, let us look to Afghanistan. Dividing the 2.26 trillion-dollar underestimate by their 38 million citizens, gives about $60,000 per Afghani that we’ve spent destroying their country. It should go without saying, but every time you destroy someone’s home or livelihood and harm a member of their family or community, you create more animosity, more hate, more violence, more terror. When you instead provide infrastructure, medicine, food, or education, you reduce that very same terror. We spent $60,000 per citizen on bombs and bullets in a country with an annual GDP per capita of about 500 U.S. dollars. Imagine the good we could have done, the peace we could have sown, and still could.

This buys you, the Wall Street Journal reports, a little bit of mostly crumbling and haphazard infrastructure, plus:

“The U.S. sent nearly 600,000 small arms, 76,000 vehicles and 208 airplanes to Afghanistan’s military and police from 2003 to 2016, according to a 2017 Government Accountability Office report, one of the few such compilations. The most recent quarterly report of the U.S.-led military coalition documented deliveries of 174 Humvees, nearly three million rounds of ammunition, and nearly 100,000 2.75-inch rockets during the period.”
…
“The Pentagon for years has had a limited grasp of the disposition of military equipment sent to Afghanistan. A 2014 report by the Special Inspector General for Afghanistan Reconstruction, or Sigar, stated that more than 200,000 small arms were unaccounted for.”
…
“In a December report, Sigar found that the Pentagon didn’t meet U.S. inspection requirements for weapons, inventorying only 40% of applicable military items from May 2019 to April 2020.”

Why does our government have money for a monstrous war machine but not for basic medicine? Why do we not have universal healthcare or full employment? For the same reason the Afghanis do not. Because, the ultra-rich are at war with everyone else.