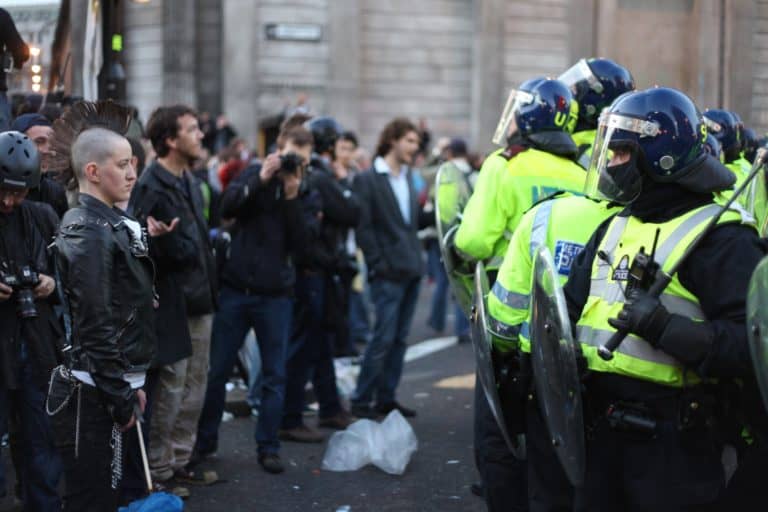 This is the first of a series of articles about fascism and its relation to the United States. You can view the additional articles here: part 2

“If you know the enemy and know yourself, you need not fear the result of a hundred battles.”

Sun Tzu, The Art of War

With the recent occupation of the capitol by far-right white supremacists and nationalists, it is important to look into the fascist threat in the United States. We hear the term fascism often, but do not have a clear definition of it. Pinning down an exact definition of fascism is so difficult that George Orwell once wrote, “It is in internal politics that this word has lost the last vestige of meaning. For if you examine the press you will find that there is almost no set of people — certainly no political party or organized body of any kind — which has not been denounced as Fascist during the past ten years.”  He goes on to note, “It will be seen that, as used, the word ‘Fascism’ is almost entirely meaningless.” It is almost as if the word fascism is redefined every time it is used. Nevertheless, it is important to establish a general framework around the word.

Fascism began in Italy and takes its name from the Latin fasces – a bound bundle of wooden rods with a projecting axe blade. The significance of this symbol is unity, strength, and justice – a bundle is stronger than a single rod. When it began, fascism had no clear ideology. As Alfredo Rocco said, “It is true that Fascism is, above all, action and sentiment and that such it must continue to be.” From its origin in reactionary fascist action groups designed to fight communism and the working class, it eventually evolved into a firmer ideology. As Mussolini described in The Doctrine of Fascism, “No individuals or groups (political parties, cultural associations, economic unions, social classes) outside the State.” Traditional fascism which had its heyday in the 1930s in Mussolini’s Italy and Hitler’s Germany was based around the totalitarian nation-state and imperialistic expansion of this state. Mussolini wrote, “Imperialism is at the base of the life of every people which desires economic and spiritual expansion.” (Seldes 363) Endless war is a feature of the fascist state. However, an imperialist totalitarian state is not a true definition of fascism. Stanley G. Payne warns that “Any definition of common characteristics of fascist movements must be used with great care, for fascist movements differed from each other as significantly as they held notable new features in common.” (Payne 5) After noting this, he goes on to list several of these characteristics which can be used as a framework to help identity fascist movements. These are shown in the following table.

A. The Fascist Negations:

Anticonservatism (though with the understanding that fascist groups were willing to undertake temporary alliances with groups from any other sector, most commonly with the right)

B. Ideology and Goals:

Positive evaluation and use of, or willingness to use, violence

Extreme stress on the masculine principle and male dominance, while espousing the organic view of society

Exaltation of youth above other phases of life, emphasizing the conflict of generations, at least in effecting the initial political transformation

Specific tendency toward an authoritarian, charismatic, personal style of command, whether or not the command is to some degree initially elective (Payne 7)

Many of the defining characteristics of 20th-century fascist movements can be seen in this table. However, the table is incomplete as it lacks a class-based analysis. The fascist negation of anticommunism is one which Mussolini himself described, “Fascism also denies the immutable and irreparable character of the class struggle which is the natural outcome of this economic conception of history…” Even though fascism denies class struggle, fascism came to power in Italy and Germany as a reactionary movement against socialism and communism through class struggle. This violent class struggle was led by the petty bourgeoisie and carried out a reign of terror against the working class. The Communist International defined fascism in 1933 as “the open, terrorist dictatorship of the most reactionary, most chauvinist and most imperialist elements of finance capital. Fascism tries to secure a mass basis for monopolist capital among the petty bourgeoisie, appealing to the peasantry, artisans, office employees, and civil servants who have been thrown out of their normal course of life, and particularly to the declassed elements in the big cities, also trying to penetrate into the working class.” Writing in exile in the same year, Leon Trotsky came to a similar conclusion, “German fascism, like Italian fascism, raised itself to power on the backs of the petty bourgeoisie, which it turned into a battering ram against the organizations of the working class and the institutions of democracy. But fascism in power is least of all the rule of the petty bourgeoisie. On the contrary, it is the most ruthless dictatorship of monopoly capital.” This definition of fascism as the dictatorship of capital lines up closely with Mussolini’s own attempt to create a system that he called “corporationism.” Mussolini framed his “corporationism” as an alternative to socialism or capitalism, saying, “Corporative economy arises at the historic moment when both the militant phenomena, capitalism, and socialism, have already given all that they could give.” (Seldes 426) This was misleading as, rather than being a departure from capitalism, fascism is one form that capitalism takes in response to its own internal crises. In practice, Mussolini’s “corporationism” bears little difference from monopoly capitalism.

Fascism has evolved since the time of Mussolini and Hitler. Fascism in the modern-day goes beyond the strictly nationalist view outlined above by Stanley Payne. The most succinct definition of modern-day fascism is that given by sociologist William Robinson in Accumulation Crisis and Global Police State, “In distinction, 21st-century fascism involves the fusion of transnational capital with reactionary and repressive political power – an expression of the dictatorship of transnational capital. In both cases, however, fascism is a response to deep structural crises of capitalism, such as that of the 1930s and the one that began with the financial meltdown of 2008.” (Robinson, 2019, pg. 854) This is the current state of fascism – the dictatorship of transnational capital.  As capitalism is a global phenomenon, so is fascism. The fascist movements inside the United States reflect this rule of the transnational corporate class.