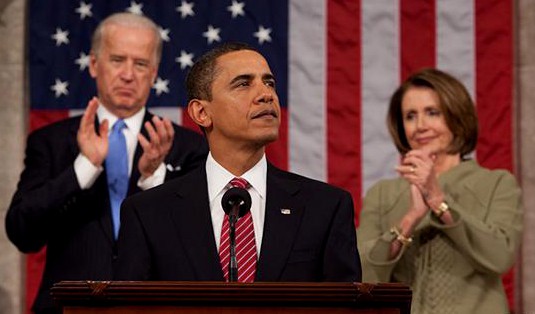 Freedom: The Burden of Accountability – Part 4

“You may choose to look the other way but you can never say again that you did not know.”

Barack Obama should be heralded as an example of what not to be as President. His name should be a curse. He shouldn’t be famous with the masses – rather, infamous among them for his deeds. The Deporter-in-Chief earned this criticism. From prosecuting whistleblowers like Snowden and Manning, to the persecution of foreign citizens like Assange, to police brutality, still–record deportations, and drone-strike “diplomacy”, President Obama’s reign was one of international terror and domestic brutality.

Three days after inauguration, Obama launched his first drone strikes. Before Obama was sworn-in, he had CitiBank privately vet his cabinet.

He bailed out Wall Street, even though they caused the 2008 financial crisis, but didn’t bail out homeowners, forcing countless families and individuals to lose their homes.  He escalated the war in Afghanistan. Obama expanded the state secret doctrine, allowing for easier prosecution of people and defense of religion-based profiling in policing and surveillance. He didn’t pass any meaningful reform or legislation for anyone other than the capitalist ruling class, despite complete control of the legislative process (Obama had a supermajority) and a liberal-leaning SCOTUS. In those first two years, where he could’ve done anything, Obama did nothing, paving the way for the Republicans to take over 1000 seats (at all levels of government) from Democrats in 2010 forward.

By the way, this is that congressional makeup Obama squandered.

In terms of foreign policy, Obama also lobbied to lower the Haitian minimum wage to 30 cents an hour and legitimized the coup in Honduras. He also made the Bush tax cuts permanent, ended habeas corpus, and granted immunity to Bush’s torturers. He also said police brutality was merely ”police acting stupidly.”

Obama’s legacy is Trump. His imperialist bloodthirst and policy violence led to the re-invigoration of the Republican Party and a faux-populist like Trump ascending to the Presidency.

In case you didn’t know, ending habeas corpus and the 2012 National Defense Authorization Act (NDAA), both of which were enacted by laws signed by Obama, make it possible for the U.S. Government to detain you indefinitely, at anytime, anywhere in the world. What rights?

Because of the enhanced police brutality and unprecedented crackdowns on whistleblowers of the Obama/Biden administration, American Civil Liberties are largely an illusion.

President Obama (with his Secretary of State Hillary Clinton) destroyed Libya, banned Syrian and Iranian refugees with executive order, and deported children to “send a message” to their parents. That last one was one of the many Obama-era precursors to Trump’s atrocious (but not entirely unique, thanks to Obama) family separation policies.

And because President Obama was a “blue”,  liberals were asleep the entire time. The masses were forced to focus on his charm and elegance and the media largely covered for him, making his image that of a good statesmen and scandal-free president, when the truth is anything but. Keep in mind, the above list of Obama’s crimes and systems-level violence isn’t a complete one.

Attempts to hold Obama accountable have, to this day, fallen short. Not for lack of trying, but because Obama is now the iconic harbinger of the establishment. Don’t believe me? In the 2020 primaries, he made a few select phone calls and rallied all the “centrist” and “moderate” candidates behind Biden to defeat the only true challenger of the establishment in the race, Bernie Sanders. The concern is that today, liberals and the American masses are already going back to sleep and embracing the false notion of ”boring politics” ushered in by the Biden inauguration.

Former President Obama is the living embodiment of the notion that “Centrists” are the most hostile to democracy. There have been studies done, and they prove two things:

100,000,000+ (100 Million+) American voters have chosen not to vote for either duopoly candidate in the last two presidential elections. Can you see why, now?

The magician and the politician have much in common: they both have to draw our attention away from what they are really doing.

1 thought on “Freedom: The Burden of Accountability – Part 4”