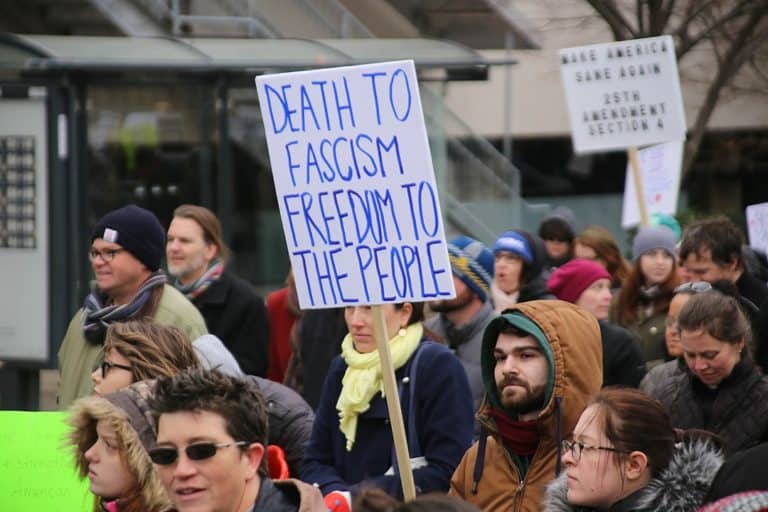 How We Can Defeat Fascism

The growth of fascism is a dire threat in the United States. Both major parties are either openly fascist or enable it through their inability to fight it. On the left, we must be prepared to fight fascism or die in the violent oppression that a fascist state will bring against us. The violent assault on the water protectors at Standing Rock and the brutal state response to Black Lives Matters protests are just small demonstrations of what a fully fascist state can bring to bear against the working class.

The antithesis of fascism is communism.  Fascists believe in an all-powerful state; communists believe in a classless, stateless society.  Fascists support the dictatorship of transnational capitalism; communists support the dictatorship of the proletariat.  To fight fascism, it is necessary to fight capitalism and the neoliberal ideology that supports it.  As Norman Solomon outlines,

“Yet, in 2021, progressives should mostly concentrate on challenging the neoliberalism of Democratic Party leaders. Why? Because the neoliberal governing model runs directly counter to the overarching responsibilities of the left—to defeat right-wing forces and to effectively fight for a decent, life-affirming society.”

The Democratic Party cannot be given a pass as a lesser evil to the open fascism of the GOP.  Supporting neoliberalism directly strengthens fascist movements.

As David Sirota wrote, “The opposition must also deliver tangible, material gains for working people — rather than continuing to be an elite and effete caretaker of a let-them-eat-cake establishment that right-wing provocateurs can forever burn in effigy.”  This is why the Democrats are not a true opposition party.  As a capitalist neoliberal party, the Democratic Party is unable to deliver on these demands because they follow the program of their corporate donors. The best they can offer are meager crumbs – Joe Biden’s latest COVID relief plan only offers a $1,400 check rather than the $2,000 he promised in Georgia. The working class needs Medicare for All, a Green New Deal, a Federal Jobs Guarantee, and democracy in the workplace. These changes will not come through weak social democratic reforms offered by a Biden administration. Bernie Sanders recently said, “I believe two years from now the Republicans will say ‘hey you elected these guys, they did nothing, vote for us,’ and they will win.” Unless the Democratic establishment does a complete about-face and rejects neoliberalism and the capitalist system, they will be crushed in the midterms.  This will usher in GOP majorities and set the stage for complete fascist takeover in 2024.

As it stands, the corporate Democratic party will not pass the policies needed and will in fact block them.  Leon Trotsky explained this when he said, “We may set it down as a historical law: fascism was able to conquer only in those countries where the conservative labor parties prevented the proletariat from utilizing the revolutionary situation and seizing power.”  The Democratic Party ended any chance of a political revolution for the working class when it blocked the Bernie campaign in two rigged primaries.  There is no path forward for the working class within the corrupt Democratic Party.

A true revolutionary party of the working class will be needed to create real change in the material conditions of the working class.  As Georgi Dimitrov said, defeating fascism “depends on the existence of a strong revolutionary party, correctly leading the struggle of the working people against fascism. A party which systematically calls on the workers to retreat in the face of fascism and permits the fascist bourgeoisie to strengthen its positions is doomed to lead the workers to defeat.” At this point the revolutionary party does not need to be ideologically perfect, it just needs to offer an alternative the neoliberalism of the two corporate parties. As Engels wrote on this topic, “A million or two of workingmen’s votes next November for a bona fide workingmen’s party is worth infinitely more at present than a hundred thousand votes for a doctrinally perfect platform.” The creation of a strong working class party is even more important with the threat of Donald Trump creating his own party.

Many on the left rightfully disagree with electoral politics, but it is important to remember that much of the working class still believe in the system.  As Lenin wrote, “Parliamentarianism is of course “politically obsolete” to the Communists in Germany; but—and that is the whole point—we must not regard what is obsolete to us as something obsolete to a class, to the masses.”  Electoral politics is something that is understood by the general population, this was the power behind the Bernie campaign.  Since Bernie refused to take the revolutionary step of breaking with the Democratic Party, it is up to us to carry out the revolution.  The masses need to break free from the hold of corporate media and learn the nature of class struggle. As Dimitrov describes,

“These masses must be taken as they are, and not as we should like to have them. It is in the process of the struggle that they will overcome their doubts and waverings. It is only by a patient attitude towards their inevitable waverings, it is only by the political help of the proletariat, that they will be able to rise to a higher level of revolutionary consciousness and activity.”

The true battle against fascism is not Democrat vs. Republican, it is proletarian vs. capitalist.  A united working class is the best way to stop the growth of fascism.

A true revolutionary party should not follow the typical path of an electoral party.  It must organize outside of electoral politics to create a true movement.  As Lenin advised, the left must “create a new, uncustomary, non-opportunist, and non-careerist parliamentarianism… should everywhere try to get people to think and draw the masses into the struggle.” We must organize with trade unions, mutual aid societies, and other revolutionary anti-capitalist groups.  As Mike Davis recently explained, “The left needs to face the fact that despite the huge popularity of its ideas and the dynamic example of BLM we remain clueless and disorganized as a national force. We need to stop looking for electoral silver-linings and get ourselves together.” A strong, organized left is necessary to defeat the growing forces of fascism.  This must be done on a local as well as a national level; talk to your friends and family and see about joining or organizing a local group.

While revolutionary anti-fascism must rely primarily on the working class, it must also take into consideration the position of the middle classes as well.  The middle class has been weakened in the United States by neoliberal policies over the last forty years, yet it still retains a significant amount of political power.  Ted Grant explained the significance of the middle class in fighting fascism in 1948,

The battle against fascism depends on the education of both the working class and the middle class.   As Clara Zetkin said in 1923, “Specifically, we view fascism as an expression of the decay and disintegration of the capitalist economy and as a symptom of the bourgeois state’s dissolution. We can combat fascism only if we grasp that it rouses and sweeps along broad social masses who have lost the earlier security of their existence and with it, often, their belief in social order.” The pandemic has hastened this decay of the capitalist system and now gives the middle class the choice between fascism and socialism as the path forward.  We must seize the moment and make a push for a socialist future.

The worst thing we can do is remain inactive and allow a Biden presidency to continue along its neoliberal path to disaster.  As the Rev. Martin Luther King Jr. wrote in Stride Toward Freedom,

Both fascism and neoliberalism must be confronted and debunked at every opportunity.  To allow these complementary ideologies to thrive will lead to the worst ravages of late-stage capitalism – imperialism and war –, much as it did in Nazi Germany.   Walden Bello has described the conditions in modern day United States as similar to those of the Weimar Republic in Germany.  By uniting the working class and elements of the middle classes against neoliberalism and fascism, we can prevent suffering the fate of Germany in the 1930’s.

In order to truly take on fascism, we must also look at it through an anti-colonial lens.  Ena͞emaehkiw Wākecānāpaew Kesīqnaeh explains this in Fascism and Anti-Fascism: A Decolonial Perspective,

“The basal liberalism of north amerikan political life and civil society has always articulated a war over life and death with two fundamental aims: the elimination of Indigenous peoples and the subjugation and exclusion of Black peoples. In this regard, liberalism and fascism in north amerika are on the same ethicalpolitical continuum, one rooted in settler colonialism and antiblackness.”

We are on stolen land and our nation’s wealth was created through slavery and genocide.  Liberalism often ignores these facts, which enables the continued existence of fascist movements and systems. Ena͞emaehkiw answers the question of how to fight fascism in the following, “For myself the answer is much the same as my answer to what we must do to fight capitalism, and in this regard the answer is simple: anti- fascism without decolonization, genuine decolonization, is meaningless—if you want to fight fascism, you have to decolonize.”

Just as they did at Standing Rock, indigenous peoples continue to lead the fight against fascism.  As the Red Nation calls for in their 10 point program,

Decolonization can be defined as “the process of deconstructing colonial ideologies of the superiority and privilege of Western thought and approaches.”  Capitalism is a Western ideal that led to the conquest of the Americas and the genocide of millions.

Fascism will not be defeated until the system that creates it is defeated.  That is why any true effort to combat fascism will require a unified anti-capitalist movement. This cannot exist within the bourgeois Democratic or Republican parties, which represent the two wings of repressive capitalism.  As MLK Jr. said in Beyond Vietnam,

“We must rapidly begin the shift from a thing-oriented society to a person-oriented society. When machines and computers, profit motives and property rights, are considered more important than people, the giant triplets of racism, extreme materialism, and militarism are incapable of being conquered.”

We conquer these three evils by creating a united front against fascism among the working class.  This will be a difficult task, but it is one that must be done.  As Chris Hedges said at the People’s Convention, “In the end, I do not fight fascists because I will win, I fight fascists because they are fascists.”