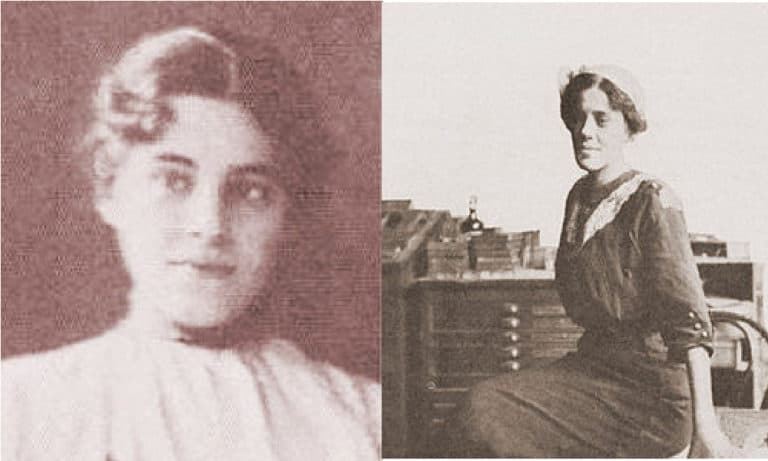 Marxism and feminism go hand in hand. All too often in this patriarchal society, female Marxists are overlooked in favor of their male counterparts. This is unfortunate as women have often taken the lead in the revolution and will continue to do so.  The Indigenous Marxist group, The Red Nation, has stated, “Cishetero patriarchy is counterrevolutionary. Radical feminism—whether Indigenous, Black, or Marxist—is our path towards revolution.” This was true in the past with Mother Jones, Lucy Parsons, Rosa Luxemburg, Emma Goldman, Silvia Federici, Clara Zetkin, Simone De Beauvoir, Marilyn Buck, Angela Davis, Assata Shakur, and countless others taking a revolutionary role in history.

One such Marxist was Mary Marcy, who is little remembered today but had a profound impact on socialism. When Mary Marcy died, Eugene v. Debs wrote,

“She was one of the clearest minds and greatest souls in all our movement, and her passing into the great silence will be such a loss as will leave an aching void to those who knew her, for her place can never be filled. I admired her for her uncompromising integrity, and I loved her for her high-souled devotion to her ideals and her personal loyalty to her comrades.”

The lessons of Mary Marcy are lessons that the working class needs today more than ever.

Mary Edna Tobius was born in 1877 and orphaned at an early age. She worked as a telephone switchboard operator and provided for her younger siblings, who had been taken away to live with relatives. She switched jobs to stenographer after buying a book on shorthand with her meager salary of $9/week. She lost this job due to making a political statement during the Bryan campaign of 1896 when her employer banned the wearing of Bryan buttons to work. She took a stand and was fired for this resolve. Clarence Darrow took up her cause and secured her a position at the University of Chicago, where she was able to attend classes for free.

After three years at school, Mary married Leslie Marcy and the couple moved to Kansas City. Mary joined the Socialist Party in 1903, one year after taking up her position in Kansas City. She began work as a stenographer in the meat packing industry. This work further radicalized her as she experienced firsthand the conditions Upton Sinclair made famous when he wrote The Jungle. Mary chronicled her own experiences in Letters of a Pork Packer’s Stenographer which was published in the International Socialist Review. Her letters brought her to the attention of an anti-trust case against the beef industry, and she testified in front of a grand jury. Mary’s testimony was key in an indictment of the meat packers, but the judge ruled on the side of the corporation and gave them immunity. Mary lost her job while the bosses retained theirs.

Mary next found work with the Associated Charities of Kansas City where she set about reforming the charity process. Rather than the traditional process of “investigate first and ‘encourage’ afterwards,” Mary chose to put assistance as the main priority. The meat packing industry pressured Associated Charities to fire Mary, but she did not cave. Mary eventually left this position due to health issues. She next found her true calling as a staff member of the International Socialist Review and secretary to the publisher at Charles H. Kerr & Company. She held this position for the rest of her life, and this is where her revolutionary work truly began to shine.

As Jack Carney described, “Mary soon came to realize a weakness in the methods by which radicals were attempting to approach the masses. She saw from the outset that Marx had to be simplified if his teachings were to be accepted by them.”  This led to her writing her most famous work – the pamphlet Shop Talks on Economics. This was a work of brilliance that still remains relevant to the class struggle today.

In Shop Talks on Economics, Mary described the fundamentals of basic Marxian economics in simple language. She described how workers are a commodity in the following way:

“Some of us work many years before we realize that even we wage-workers have one commodity to sell. As long as we are able to work we try to find a buyer of our labor-power. We hunt for a job and the boss that goes with a job.”

She simply outlined the value of commodities with the simple statement,

“Every time more social labor is needed in making commodities–shoes, hats, gloves, stoves or cigars–whatever these commodities may be–their value is increased. Every time the quantity of socially necessary labor is lessened in the production of commodities, their value is decreased.”

And the all-important concept of surplus-value,

“In two hours the miner produces in coal value sufficient to pay for his labor-power, but in the eight succeeding hours of labor, he will produce coal valuing $8.00, all of which the capitalist retains for himself.”

Mary took the vital lessons of Capital and Value, Price, and Profit and made them comprehensible for the working class.

Not only did Mary present the fundamental issues with capitalism, but she also provided the solution in socialism. She wrote,

She understood the shortcomings and weaknesses of the socialist movement in the U.S. but did not give up hope. The following paragraphs are beautifully crafted and describe the class struggle according to the conditions of the time:

“It is true that the working class, as a class, has never been sufficiently well organized to demand a universally higher price for its labor power–a larger portion of the value of its product from the capitalist class.

It is equally true that when they shall have become sufficiently organized and class conscious to do so, they will not stop with asking higher wages, but will abolish the whole wage system itself.

We must organize along industrial lines to shorten the hours of labor. If an eight-hour day were inaugurated, it would mean the additional employment of millions of men and women in America tomorrow. It would insure us leisure for study and recreation – for work in the Army of the Revolution, and it would mean higher wages in America generally. For the fewer men there are competing for jobs, the higher the wage they are able to demand.

To repeat: Modern machinery is throwing more and more men and women into the Army of the Unemployed. Shorter hours will employ more men and women, and will maintain and even increase wages, to say nothing of the tremendous development of the fighting spirit, the solidarity and class consciousness of the workers.

Flood the nations with your ballots, working men and women of the world. Elect your shop mates, your companions of the mines, your mill hand friends, to every possible office. Put yourselves or your co-workers into every government position as fast as possible to render your court decisions, to hold in readiness your army; to control your arsenals and to protect you with your constabulary, to make your laws and to serve your fellow workers, whenever and wherever and however possible.

And organize industrially. With your government at your backs, ready to ward off Capitalism, ready at all times to throw itself into battle for you, you can gather the workers of the world into your industrial organization and sign the death warrant of Wage Slavery!”

Over two million copies of Shop Talks were sold throughout the world and it was translated into Japanese, Chinese, Finnish, Romanian, French, Italian and Greek. She wrote many other pamphlets, but “Shop Talks” remained her masterpiece. She taught a correspondence course on Marxian economics and was always busy responding to letters from workers throughout the world. As Carney describes,

“For radicals the world over found in her a clearing house for their many differences. It seemed as if she had been appointed to keep the radicals from destroying themselves. An I. W. W. member would write criticising the Communists and vice versa. Craft unionist and industrial unionist would write to her and detail their troubles. Mary advised them all and always wrote with a view to keeping them together, for well she knew that in the days when the masses are engaged in real struggle the revolutionists must unite.”

She was always a proponent of leftist unity – a lesson which is still relevant today.

“She foresaw— and how correct she was—that the “reds” would waste their time fighting each other, instead of fighting the boss. She urged them to remember that each side had its faults and that above all they must remember that in dealing with real things they should first, last and all the time be realists.”

“If, instead of denouncing the only revolutionary movement that is actually making inroads in industry, we would learn what political action really is, and tell our friends what it is; if, instead of petty criticising, we were to back up this fighting organization and show it that an army is the FORCE that makes the State something besides a few words, or laws written upon pieces of paper; that mass action may be political action and that we are all so close together that we ought to present a solid front to the capitalist enemy, we might then develop a movement in this country that would actually move and grow.“

This is what we need today – a solid front to the capitalist enemy.

Mary had joined the Industrial Workers of the World in 1918. She was so deeply involved in the I.W.W. that she twice mortgaged her house to bail out leaders of the movement. First for Secretary-Treasurer A. S. Embree and then again for William “Big Bill” Haywood, one of the founders of the IWW. Unfortunately for Mary, Big Bill skipped bail and fled to Soviet Russia and Mary ended up losing her house. After this setback, she fell into a deep depression and took her own life on December 8, 1922. Jack Carney described this loss,

“The world’s revolutionary movement has lost one of its best fighters and clearest thinkers in the death of Mary E. Marcy. The loss sustained by the world at large is great, but that of the movement in the United States is greater, for there is no one to occupy the place left vacant by Mary, as she was affectionately known by thousands who knew her only by correspondence.”

We would do well to remember her words today,

“Nothing has ever been done for the working class until the workers began to exercise power to force these things. Nobody but yourselves is going to do anything for you now. You must organize industrially, as well as politically, and carry on the work of education as you have never done before. And what you want done you will have to do yourselves.”