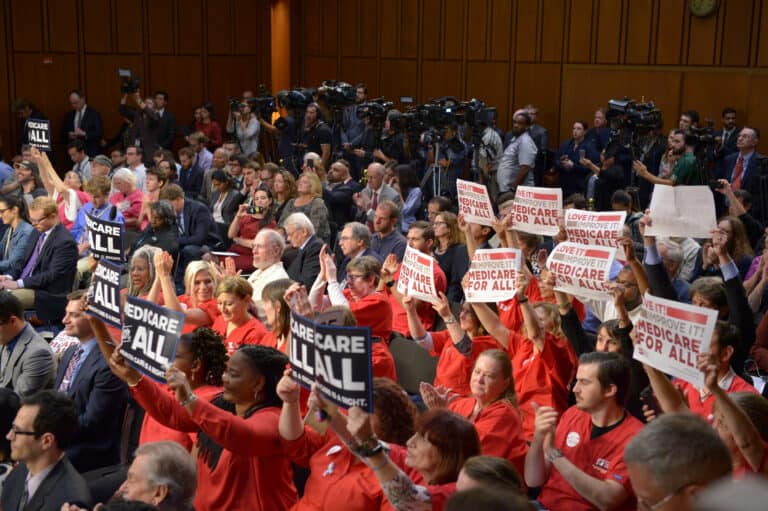 Medicare For All: Just The Facts, Ma’am

Given that so much blatantly false information is being pushed online; (often knowingly and in bad faith), I feel the need to do a breakdown of the basic facts.

I am going to start with some definitions of frequently misused words from state by state Medicare 4 All supporters, as defined in the Meriam-Webster dictionary. I am not being condescending, but rather calling awareness to the continuous misuse of the words, used as a manipulation.

ALL: The whole amount, quantity, or extent of

(No caveats, “unless”, or asterisks given)

EQUITABLE: Having or exhibiting equity: dealing fairly and equally with all concerned

SINGLE-PAYER: of, relating to, or being a system in which health-care providers are paid for their services by the government rather than by private insurers

UNIVERSAL: Including or covering all/

Embracing a major part or the greatest portion (as of humankind)

INCREMENTAL: Of, relating to, being, or occurring in especially small increments

MEANS-TEST: An examination into the financial state of a person to determine eligibility for public assistance

I will now supply the facts regarding common misconceptions and false talking points:

“We can pass Medicare for all just like Canada; one state at a time”

Canada had no other option than to pass their healthcare system province by province, per their constitution.

It took 6 years for all provinces to be covered, (as per being passed individually)

Because Canada’s healthcare system is per province, some territories have services, others do not (For example, if your doctor is in another province, you may be charged for the full price of that service)

Several provinces are trying to repeal their healthcare system, (which means, some territories may be left to pay for their services, while others do not)

“We can pass Medicare for all, just like cannabis; one state at a time”

The fight to legalize cannabis began in 1905

The first state to legalize cannabis was California, in 1996

“Ballot initiatives are the quickest way to achieve Medicare for All”

24 States do not allow ballot initiatives (Additionally, Washington, DC and Puerto Rico are not “states” and would also not qualify)

Medicare for All ballot initiatives have previously failed in Vermont, New York, Maine, Washington state, and California (due to the author of the bill, shelving it)

These are simply a few examples of misinformation and (sometimes intentionally) misleading tropes used to push a state by state M4A agenda. I have listed the facts. Critical thinking is absolutely imperative in a time when humanity is suffering, more than ever before. Given we have an estimated 31 million people uninsured and millions more underinsured, an estimated 68,000 people die every year from lack of healthcare, or insufficient healthcare, medical bills are the number one cause of bankruptcy, people rationing their insulin and other prescriptions en mass, the number one cause of go fund me are medical needs, and suicide and self-harm are at an all-time high; my question is: should we really be focusing on a particular segment of people, or put 100% of our effort in helping ALL, as “Medicare for ALL” states? How many people are willing to sacrifice while “we got ours”?

There are no asterisks, or caveats after “healthcare is a human right”. You either truly believe it, or you don’t.

We the people are pissed off

1 thought on “Medicare For All: Just The Facts, Ma’am”