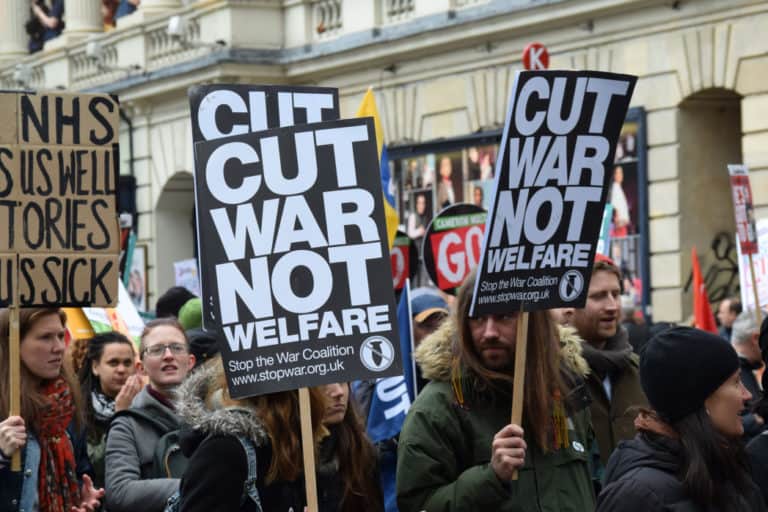 No War but Class War

As Joe Biden fills his cabinet with war hawks, it is inevitable that the next four years will see the continuation of aggressive U.S. imperialism and war. The military industrial complex has the full support of the president elect and the Democratic Party establishment. It will be up to us to lead the effort to counter this aggression and bring back a strong anti-war movement to the United States. History shows that while opposition to war is a difficult path, it is the only moral stance we can take.

The non-binding Democratic Platform claims, “Democrats will deliver on this overdue commitment to end the forever wars, and we will do it responsibly—setting priorities, leading with diplomacy, protecting ourselves from terrorist threats, enabling local partners, and bringing our troops home.” Yet in stark contrast to the platform, this summer, Democratic Representative Jason Crow of Colorado worked with Republican Representative Liz Cheney to craft legislation preventing the withdrawal of troops from Afghanistan. More Republicans than Democrats voted against this amendment. The same is true of the 2021 National Defense Authorization Act that budgets $740.5 billion for the military. Actions speak louder than words and the actions of the Democratic party are not those of an anti-war party.

The Democratic Party has embraced endless wars. President elect Joe Biden has been busy filling his cabinet with pro-war members. For Secretary of Defense, Joe Biden has selected Lloyd Austin. Lloyd Austin is currently on the board of directors of Raytheon Technologies. Raytheon is a major supplier of weapons to Saudi Arabia and these weapons have been used in the war against Yemen, killing children. But Biden justifies the choice of Lloyd Austin because, “he will be the first African American to helm the Defense Department—another milestone in a barrier-breaking career dedicated to keeping the American people secure.” This is blatant weaponization of identity politics to support the military industrial complex and corporate handouts for defense manufacturers. Putting a board member of Raytheon in charge of the Defense Department is not a step forward.

The most blatantly insulting choice to progressives is Joe Biden’s nomination of Neera Tanden for Office of Management and Budget director. Neera Tanden once said of Libya, “We have a giant deficit. They have a lot of oil.” This is clear support of imperialism war for oil. Regarding the conflict in Syria, she tweeted, “On Syria, while I don’t want to be the world’s policeman, an unpoliced world is dangerous. The US may be the only adult in the room left.” Considering the police are waging war on minorities in the U.S., the description of the U.S. as the world’s policeman is apt. The choice of Neera Tanden is another indication that the storm clouds of war are brewing over a Biden administration.

The list goes on – Antony Blinken, Biden’s choice for Secretary of State, supported the war in Iraq and intervention in Libya. His latest job was as an executive of Wes­t­Ex­ec Advi­sors, a strategic consultancy firm working closely with aerospace and defense companies. Avril Haines, Biden’s pick for director of National Intelligence also worked at WestExec Advisors. She was on the team that helped cover up CIA torture and was a staunch supporter of Obama’s drone strike program. Biden’s National Security advisor, Jake Sullivan, said in a recent interview that, “we should deepen our support for Saudi” and “We’re going to be holding Iran’s feet to the fire.” He also authored an article in The Atlantic in defense of American exceptionalism. These are just a few of the swamp monsters Biden and his team have selected to continue a legacy of endless war and state sponsored terrorism. Biden can claim his cabinet is diverse in gender and race, but it is homogeneous when it comes to supporting the military industrial complex and neoliberal policies of austerity.

At the top, Joe Biden and Kamala Harris both have records of supporting war. Joe Biden argued for war in Iraq in 1998. He co-authorized a bill with John McCain that opened up the possibility of a ground invasion in Kosovo. Kamala Harris voted against Bernie Sanders’ amendment to reduce military spending by 10% and in favor of the 740.5 billion dollar National Defense Authorization Act (NDAA). Only time will tell how long after inauguration it will be before these two “Cry ‘Havoc,’ and let slip the dogs of war.”

When the war comes under Biden’s leadership, the media will propagandize and glorify it. When President Trump launched a tomahawk missile strike on Syria in 2017, Fareed Zakaria declared on CNN, “I think Donald Trump became President of the United States.” MSNBC anchor Brian Williams described the strike saying, “”I am tempted to quote the great Leonard Cohen: ‘I am guided by the beauty of our weapons.’ And, they are beautiful pictures of fierce armaments making, what is for them, a brief flight over to this airfield.” In the eyes of the profit driven corporate media, death and destruction is beautiful. This is typical of the media, writing of the Gulf War, Norman Solomon tells us, “In total, FAIR found, only 1.5 percent of the sources were identified as American anti-war demonstrators; out of 878 sources cited on the newscasts, just one was a leader of a U.S. peace organization.” The mainstream media will silence anti-war voices and amplify those in favor of U.S. imperialism and aggression.

The socialist movement and the anti-war movement have gone hand in hand throughout history. On June 16, 1918, in Canton, Ohio, socialist leader Eugene v Debs said, “The master class has always declared the wars; the subject class has always fought the battles. The master class has had all to gain and nothing to lose, while the subject class has had nothing to gain and all to lose—especially their lives.” As a result of this speech, Debs was arrested and imprisoned. During his trial, he reinforced his antiwar position saying, “I have been accused of obstructing the war. I admit it. Gentlemen, I abhor war. I would oppose the war if I stood alone.” This stance was not just that of Debs but was the official platform of the Socialist Party of the United States. In an anti-war proclamation, they wrote, “Our entrance into the European War was instigated by the predatory capitalists in the United States who boast of the enormous profit of $7 billion from the manufacture and sale of munitions and war supplies and from the exportation of American food stuffs and other necessaries.” Capitalist war profits today remain a driving force behind the endless wars.

In his book, “War is a Racket,” Major General Smedley Butler explained that big business profited greatly off of World War I. As he wrote, “It has been estimated by statisticians and economists and researchers that the war cost your Uncle Sam $52,000,000,000. Of this sum, $39,000,000,000 was expended in the actual war itself. This expenditure yielded $16,000,000,000 in profits.” The capitalists profited off a war in which they did not fight. The working class were killed and maimed while the capitalists reaped the benefits. The owners of the defense manufacturers do not go to war – that is left to the poor who are drafted or lured into volunteering to serve with the offer of free college tuition and healthcare. As Smedley Butler noted, “So capital won’t permit the taking of the profit out of war until the people — those who do the suffering and still pay the price — make up their minds that those they elect to office shall do their bidding, and not that of the profiteers.” The United States remains an oligarchy run by corporations for profit and the war machine is a huge part of it. The people must unite together against war and the capitalist system driving it.

When the Reverend Martin Luther King, Jr., gave his speech “Beyond Vietnam,” he brought forth many of the same criticisms as Eugene V. Debs and Smedley Butler.

“It is with such activity that the words of the late John F. Kennedy come back to haunt us. Five years ago, he said, ‘Those who make peaceful revolution impossible will make violent revolution inevitable.’ Increasingly, by choice or by accident, this is the role our nation has taken, the role of those who make peaceful revolution impossible by refusing to give up the privileges and the pleasures that come from the immense profits of overseas investments. I am convinced that if we are to get on to the right side of the world revolution, we as a nation must undergo a radical revolution of values. We must rapidly begin, we must rapidly begin the shift from a thing-oriented society to a person-oriented society. When machines and computers, profit motives and property rights, are considered more important than people, the giant triplets of racism, extreme materialism, and militarism are incapable of being conquered.”

This must be the basis of the new anti-war movement — it must be oriented on the well-being of all people, as opposed to the profits of the capitalists.

War is not a matter of small consequences – indeed, the future of civilization is at stake. The United States war machine is the biggest polluter on the planet, contributing greatly to the climate crisis. The biggest threat to the continuation of human life on the planet are nuclear war and climate change. A Biden administration full of war hawks is not going to save us from these threats. As the Russell-Einstein Manifesto states, “Here, then, is the problem which we present to you, stark and dreadful and inescapable: Shall we put an end to the human race; or shall mankind renounce war?” These are our choices and in the words of MLK Jr., “Our only hope today lies in our ability to recapture the revolutionary spirit and go out into a sometimes-hostile world declaring eternal hostility to poverty, racism, and militarism. With this powerful commitment we shall boldly challenge the status quo and unjust mores, and thereby speed the day when “every valley shall be exalted, and every mountain and hill shall be made low; the crooked shall be made straight, and the rough places plain.” It is up to us to take to the streets and have our voices heard, “No war but class war!”