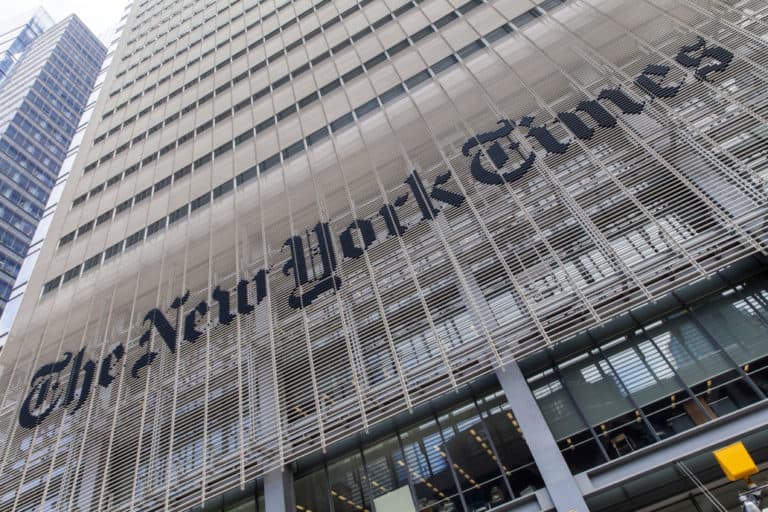 People who are only just beginning to research what’s wrong with the world often hold an assumption that mainstream news reporters are just knowingly propagandizing people all the time. That they sit around scheming up ways to deceive their audiences into supporting war, oligarchy and oppression for the benefit of their plutocratic masters.

Once you’ve learned a bit more you realize it’s not quite happening that way. Most mainstream news reporters are not really witting propagandists–those are to be found more in plutocrat-funded think tanks and other narrative management firms, and in the opaque government agencies which feed news media outlets information designed to advance their interests. The predominant reason mainstream news reporters say things that aren’t true is because in order to be hired by mainstream news outlets, you need to jack your mind into a power-serving worldview that is not based in truth.

A recent job listing for a New York Times Russia Correspondent which was flagged by Russia-based journalist Bryan MacDonald illustrates this dynamic perfectly. The listing reads as follows:

Vladimir Putin’s Russia remains one of the biggest stories in the world.

It sends out hit squads armed with nerve agents against its enemies, most recently the opposition leader Aleksei Navalny. It has its cyber agents sow chaos and disharmony in the West to tarnish its democratic systems, while promoting its faux version of democracy. It has deployed private military contractors around the globe to secretly spread its influence. At home, its hospitals are filling up fast with Covid patients as its president hides out in his villa.

If that sounds like a place you want to cover, then we have good news: We will have an opening for a new correspondent as Andy Higgins takes over as our next Eastern Europe Bureau Chief early next year.

Does this sound like the sort of job someone with a less than hostile attitude toward the Russian government would apply to?  Is it a job listing that indicates it might welcome someone who sees mainstream Russia hysteria as cartoonish hyperbole designed to advance the longstanding geostrategic interests of western power structures against a government which has long resisted bowing to the dictates of those power structures? Someone who voices skepticism about the plot hole–riddled establishment narratives of Russian election meddling and Novichok assassinations? Someone who, as Moon of Alabama notes, might point out that Putin is in fact at work in the Kremlin right now and not “hiding out” in a “villa”?

Of course not. In order to get a job at the New York Times, you need to demonstrate that you subscribe to the mainstream oligarchic imperialist worldview which forms the entirety of western mass media output. You need to demonstrate that you have been properly indoctrinated, and that you can be guided into toeing the imperial line with simple attaboys and tisk-tisks from your superiors rather than being explicitly told to knowingly lie.

Because if they did tell you to knowingly lie to the public to advance the interests of the powerful, that would be propaganda. And propaganda is what happens in evil backwards countries like Russia.

Mainstream establishment orthodoxy is essentially a religion, as fake and power-serving as any other, and if you want to work in mainstream politics or media you need to demonstrate that you are a member of that religion.

That’s all you’re ever seeing when you notice blue-checkmarked reporters tweeting in promotion of imperialist interests and status quo politics. They are not laboring under the delusion that they are saying anything new or insightful that a hundred other people aren’t saying at the exact same time; they are signaling. They are letting current and prospective peers and employers know, “I am a believer. I am a member of the faith.” This way they are ensured the continued advancement of their careers in mainstream news media.

This is why you have labels for anyone expressing skepticism of establishment narratives like “conspiracy theorist”, “useful idiot”, “Russian asset” or “Assadist”; the powerful people who understand that whoever controls the narrative controls the world need labels to separate the faithful from the heathens. It means the same thing as “heretic”.

The fast and easy way to get rich and famous has always been to promote the interests of the powerful. This is as true in every other sector as it is in media. For this reason, those who pour their energy into criticizing existing power structures and shining a bright light on their dynamics aren’t likely to be living in fancy mansions or going to ritzy parties any time soon, while those who do the opposite actually will. And yet when someone sets up a Substack or a Patreon account to make criticizing the powerful their life’s work, it is they who will get called money-grubbing grifters by the propagandized.

The faces you see thrust onto screens by the plutocratic media are not spouting falsehoods while being aware of their deception, any more than any preacher is knowingly lying when they say you’ll burn for eternity if you don’t accept the gospel. Most of them believe everything they are saying, because they have been propagandized into becoming good acolytes and proselytizers of the faith.

The most propagandized people on earth are those who are responsible for promulgating propaganda.

This article was originally published by Caitlin Johnstone on Nov. 21st, 2020