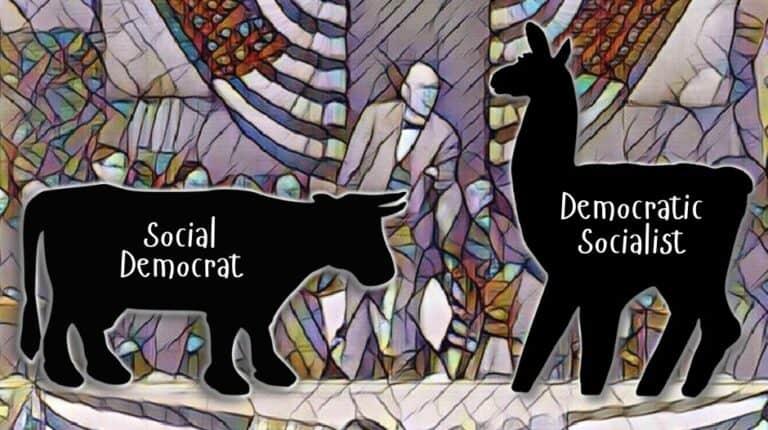 The true democrat is of necessity a socialist as well.

It is important to use correct definitions when we discuss ideas, politics, and ideologies. Cows and llamas are both furry mammals that produce milk that is consumable by humans. Yet they are distinctly different animals. If I call a cow a llama or vice versa, people will rightfully disagree with me. Just because it is my opinion that a cow is a llama does not make me inherently correct. There are real definitions and distinctions between these two types of animals. If people go around labeling things incorrectly, the result is mass confusion. This has happened with the terms Democratic Socialism and Social Democracy. It is impossible to have an ideological discussion in good faith when people have been misled on the actual meanings of these terms.

Social Democracy and Democratic Socialism are often confused with each other, even though they are as different as cows and llamas. This is a common mistake that is made on social media. It has not been helped by numerous memes claiming to define Democratic Socialism.

Many memes floating around social media claiming to define Democratic Socialism are incredibly misleading and inaccurate. Democratic socialism is a very simple concept – it is in the name itself. It is a form of socialism (worker control of the means of production) that is achieved through democratic means (electoral politics). In order to be very clear on this definition, here is the entire entry in The SAGE Glossary of the Social and Behavioral Sciences:

We must recognize that in the 21st century, in the wealthiest country in the history of the world, economic rights are human rights. That is what I mean by democratic socialism.”

What Bernie called for would certainly be progress in the United States, but it stops short of true Democratic Socialism. Economic rights are human rights and the working class has the right to all that it produces; in order to truly be free, the working class must control the means of production. Bernie was correct when he said, “And let me be absolutely clear: democratic socialism to me requires achieving political and economic freedom in every community.” But economic and political freedom require a change in the economic system, not regulations of the inherently exploitative capitalist system. Bernie danced around the edges of Democratic Socialism but failed to make the important distinction between Democratic Socialism and Social Democracy.  Bernie made it clear that he was not a capitalist, but for whatever reason, he was unable to deliver a coherent message on what Democratic Socialism actually is.

Other Democratic Socialists have done far better with their messaging than Bernie. Meagan Day of the Democratic Socialists of America (DSA) explained, “Our goal is not to rein in the excesses of capitalism for a few decades at a time — we want to end our society’s subservience to the market.” Another DSA member, New York State Senator Julia Salazar said, “A democratic socialist recognizes the capitalist system as being inherently oppressive, and is actively working to dismantle it and to empower the working class and the marginalized in our society. Socialists recognize that under capitalism, rich people are able — through private control of industry and of what should be public goods — to accumulate wealth by exploiting the working class and the underclass. Functionally, this perpetuates and exacerbates inequality.” And in an excellent article on the difference between Democratic Socialism and Social Democracy, Michael A. McCarthy wrote, “Democratic socialism, on the other hand, should involve public ownership over the vast majority of the productive assets of society, the elimination of the fact that workers are forced into the labor market to work for those who privately own those productive assets, and stronger democratic institutions not just within the state but within workplaces and communities as well. Our characterization of democratic socialism represents a profound deepening of democracy in the economy.” These are very accurate descriptions of what Democratic Socialist principles are and breaks through the muddled information that Bernie conveyed in his speeches and campaigns.

Democratic socialism proceeds from the principle that the political and social questions are inseparable; proudly rejecting any pact with the existing order, it is determined to win a democratic state for a society that will be organized on a socialist basis. Only we, the adherents of this socialism, are justified in calling ourselves a socialist party.

While Democratic Socialism is not specifically Marxist, it would not exist without Marxism and draws much from Marx and Engels’ theories. As DSA says, “The democratic socialist vision does not rest upon one sole tradition; it draws upon Marxism, religious and ethical socialism, feminism, and other theories that critique human domination.” Social Democracy is not in any way Marxist as it still maintains the capitalist system. As Roger Morgan explains in Social Democracy in Europe: A Comparative Examination:

By 1945, when the postwar years brought a renewed period of Social Democratic government in large parts of Western Europe, one of the fundamental differences separating social democracy from Communism (or indeed from left-wing socialism) had become absolutely clear: Communists and many others continued to define ‘socialism’ in the traditional terms of ownership of the means of production. Parties like the German, Austrian or Scandinavian Social Democrats, who had decisively abandoned this view to embrace the idea of a mixed economy, including both public and private sectors, were denounced by the Left (including the Communists and significant elements in the Socialist Parties in France, Italy, Britain and Greece) for ‘managing the capitalist system’ rather than making the transition to ‘socialism’.

This definition of Social Democracy is backed up by well-known economist Jeffrey Sachs. On the Freakonomics Podcast, Sachs explains this in a conversation with Stephen Dubner:

SACHS: A socialist economy, in the traditional usage of economics and in political history — though it’s a term that has been used for all sorts of things — generally means an economy organized around social ownership, which might mean state ownership, or it could mean a cooperative ownership, or in some views it has meant worker ownership, or in other interpretations, citizens’ ownership. But the idea is that it’s some kind of social ownership of the means of production.

Stephen DUBNER: When you talk about, let’s say, a Nordic economy — Norway, let’s just pick as a socialist democracy, what component of that economy is socialist? SACHS: Well, the Nordic economies are not socialist democracies. They call themselves social democracies. That’s a very big difference. They do not call themselves socialist, in general, because most of the production, most of the businesses in the economy, are private, corporate ownership. But what they do, which is quite different from the United States, is that they collect far more in total tax revenues, and then use those additional revenues to provide far more public services than the United States provides.

We are socialists because we reject an economic order based on private profit, alienated labor, gross inequalities of wealth and power, discrimination based on race, sex, sexual orientation, gender expression, disability status, age, religion, and national origin, and brutality and violence in defense of the status quo. We are socialists because we share a vision of a humane social order based on popular control of resources and production, economic planning, equitable distribution, feminism, racial equality and non-oppressive relationships. We are socialists because we are developing a concrete strategy for achieving that vision, for building a majority movement that will make democratic socialism a reality in America. We believe that such a strategy must acknowledge the class structure of American society and that this class structure means that there is a basic conflict of interest between those sectors with enormous economic power and the vast majority of the population.

To further back this up, their page on What Is Democratic Socialism says:

Capitalism is a system designed by the owning class to exploit the rest of us for their own profit. We must replace it with democratic socialism, a system where ordinary people have a real voice in our workplaces, neighborhoods, and society.

To equate Democratic Socialism, an ideology that clearly calls for changing the economic system from capitalism to socialism, with the welfare-state capitalism of Social Democracy is as absurd as calling a cow a llama. These ideologies are two very different beasts. It is necessary to understand the distinction between these two very different systems in order to propel the socialist movement forward.