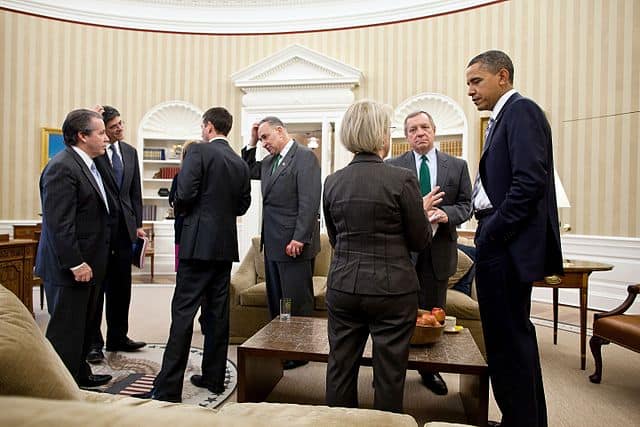 Tasking ourselves to put out the fires of fascism requires a concerted effort to improve material conditions using programs of universality. It has been declared, many times, “You can have means-testing, or you can have democracy.” Limiting social aid based on arbitrary determinations of an individual or household’s level of “means” only slows down the reception of aid and locks out people who need the aid, often disproportionately affecting black and brown people, reducing the aid they can receive. Means-testing is a form of institutional racism.

Yes, the original American Revolution was a bourgeois affair. Our great founders wanted to preserve low taxes and slavery so they could continue to extract great sums of wealth from the working and enslaved classes. This ideological and material motivation of the founders is where the infamous 3/5ths compromise came from. It’s also why they debated using the line “and the pursuit of property,” rather than “and the pursuit of happiness,” in their inalienable rights cited in the preamble to the constitution. Jefferson went with the “pursuit of happiness,” overruling Locke’s influence, likely to get poor colonials with no land or means to attain it on their side in the upcoming war.

When you hear an American politician talk about freedom, replace the word “freedom” with “property” in your mind, and everything becomes so much clearer. Pursuit of property is the foundational underpinning of the United States and the ideological motivation for its worst crimes. From the near-total genocide of Native Americans to slavery and Jim Crow, even to segregation and the Biden Crime Bill, America is built on dispossessing humans, especially non-white humans, from any gains or property to further enrich and entrench the power of those already with the capital and power. The system of the United States does this violently, oppressively. There is never a peaceful set of affairs when it comes to the United States acquiring or preserving land and power for its regime.

Of course, the indomitable rule of transnational capital can lead one to feel hopelessness, despair. Even beyond the alienation and atomization typical of the commodification of each worker, each human under capitalism, the weight of capitalism can be minatory.

“Despair is typical of those who do not understand the causes of evil, see no way out, and are incapable of struggle. The modern industrial proletariat does not belong to the category of such classes.”

Solutions abound. However, they will not be found within our current system. As the failures of the Squad prove, sending individuals to the heart of the machine will not change the machine, it will change the individuals. The parties and their machinations are too powerful. After all, the duopoly has reigned since the inception of the United States. Focusing on electoral politics as we know them will only lead to failure for the left, and extinction for humanity. Humanity’s survival beyond the next 3-4 decades is inexorably linked to the success of the left in this decade.

“The great secret about goals and visions is not the future they describe but the change in the present they engender.”

To break the stranglehold of the duopoly will require ranked-choice voting. Of course, the members of the duopoly whether formally in power or not will not move to enact anything that threatens their stranglehold on power. That means it is up to us. Those of us who are electorally minded should focus on passing RCV (ranked-choice voting) via ballot initiatives and/or referendums. Trying to ram leftist candidates through the existing duopoly will end in disappointment and failure. We must have the infrastructure for an independent or third party progressive to run a successful campaign. RCV is that infrastructure.

Those of us that are not electorally-minded should focus on direct and mutual aid efforts, community gardens and farms, and communal self-defense training and armament. We should be able to feed and protect each other, on our own.

In a fashion, the electoral efforts will be backed up by the organized and self-reliant communities. In other words, the change will flow up from the bottom.

Additionally, social justice and activism requires many people playing many separate roles. We must stop destroying each others’ credibility over purely tactical disagreements. Of course, there are more than simple disagreements. Bigotry, for example, should be called out and the person being bigoted should be coached gently so they have a chance to evolve away from that hatred – at least, that should be the praxis in most cases. If someone doubles down after attempts to coach and cause reparation for the harm done, they will likely cause more harm long-term and may need to be dropped from certain spaces, for a time.

“Our homeland is the whole world. Our law is liberty. We have but one thought, revolution in our hearts.”

Contrary to common belief, riots can produce positive changes. Following the assassination of Dr. Martin Luther, Jr., there were riots that created pressure to ensure the passage of the Fair Housing Act, also known as the Civil Rights Act of 1968. In addition, the earth-shaking #BlackLivesMatter protests and riots following George Floyd’s assassination have led to an 101-point increase in supportive polling for defunding the police in the space of a year.

“Ultimately their efforts were a colossal failure thus far. I cannot stress enough how impressive the current support for Defund the Police currently is despite the constant media propaganda done against it by both sides of the partisan corporate media. Last summer during the height of the George Floyd protests and calls to Defund the Police, according to 538, Defund the Police was –27 in approval. Now according to Data for Progress and The Lab, 74% of Democrats and 55% of independents support it. That is a massive, almost unheard-of shift in favor for a policy position in less than a year. The shift is palpable.”

In addition to focusing on direct democracy electoral efforts (referendums) in order to pass RCV outside of the duopoly, and building community self-reliance, a well-timed protest or even a riot can act as a catalyst for change. All three of these, together, are revolutionary.

Recalling the parable of the choir, left activism should be similar: “A choir can sing a beautiful note impossibly long because singers can individually drop out to breathe as necessary and the note goes on.” It requires sustained pressure to achieve and maintain any form of social reform.