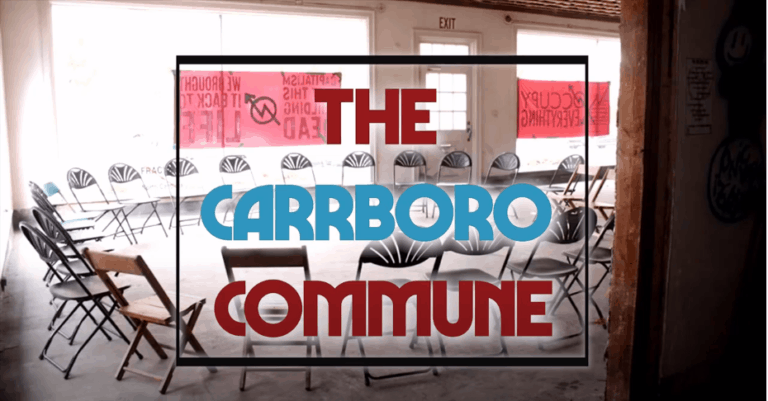 The Story of the Carrboro Commune

This is a story about a direct action that I wasn’t a part of but I do know a bit from locals and despite this being a small and widely underreported story, I was able to dig up enough information through my activist contacts to put together the following.

Eight years later, on the night of November 12th, 2011, after a local Anarchist Bookfair, a group called “The Carrboro Commune” took over a long abandoned Franklin St building with the intention of turning it into a bustling community center that would operate free of charge to the local community, something that would be a boon to the local homeless populations and working poor.  This has to be the most meaningful thing to happen on the heels of an Anarchist Bookfair I’ve ever heard of.

The police briefly show up on that first night, the occupiers meet them with chants of ‘ACAB’ which according to an interview with the police at the time done by IndyWeek, that had to look that up and were very offended when they finally found out what it means.  Despite this, they immediately leave, giving the occupiers the feeling that they had the police’s approval.  After all, they didn’t say a word, they just came and went as if there was no problem.

With the police out of the way, the Occupiers mobilize trucks to ship in palates of water and a shipment of Indian food donated by a local restaurant interested in helping to feed the community [side note, the same restaurant also fed the 100+ people who showed up to UNC CH for the Board of Governors meeting as well]

They put up banners reading “Occupy Everything” and “Capitalism left this building for dead, we brought it back to life” in the windows and hung them from the roof. By that night, the once abandoned building was home to about fifty people, one of whom set up a computer and projector system to play capitalist critiques and another handed out flyers to passersby going to local restaurants and bars, explaining this experiment as an extension of the Occupy Wall Street movement.  Moving later into the night there’s a dance party to videos of Occupy Oakland’s direct actions.

“All across the US thousands upon thousands of commercial and residential spaces sit empty while more and more people are forced to sleep in the streets, or driven deep into poverty while trying to pay rent that increases without end. Chapel Hill is no different: this building has sat empty for years, gathering dust and equity for a lazy landlord hundreds of miles away, while rents in our town skyrocket beyond any service workers’ ability to pay them, while the homeless spend their nights in the cold, while gentrification makes profits for developers right up the street.”

Their plans for the building included dividing the space into a free store, kitchen, clinic, performance space, school, workshop, library, and dormitory. In classic Chapel Hill-style, a free yoga class on Nov. 13th afternoon was the first such use of the space, just before the arrests.

From there, 8 protesters, 2 journalists, and a legal observer were detained and packed onto a city bus with a Wells Fargo ad on the side.  Protesters didn’t like that at all.

But that’s where this story unfortunately ends, and I am left wondering, what could have happened if the police had never come back?