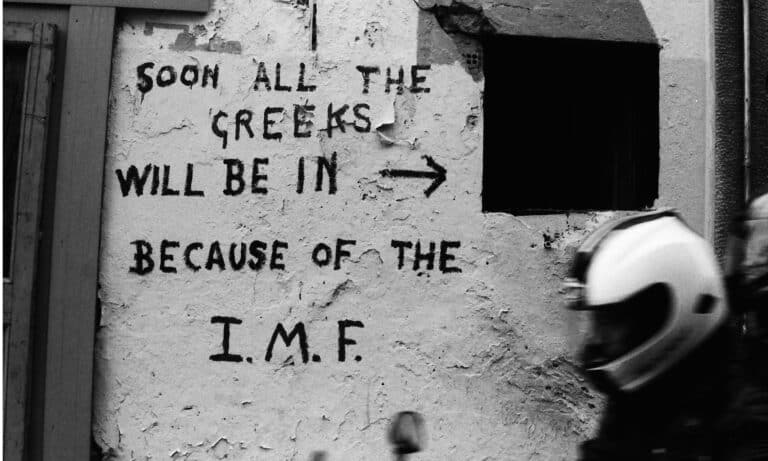 The Austerity Beatings of Greece Will Continue

Until Its Morale Improves

The old joke, that conveys a critical truth, is the poster that says “The daily floggings will continue until morale improves around here.”  The troika misses the irony in the poster, for it thinks that the answer to the eurozone nightmare problems caused by austerity is more austerity.  The latest example is three IMF stories that ran contemporaneously.  The IMF, again, lowered global growth forecasts.  Two, the IMF is calling for fiscal stimulus rather than austerity.  Three, the eurozone wants to inflict more severe austerity on Greece, purportedly to make the IMF happy.  If you sense a logical disconnect, you are right.

“Downside risks to the global economic outlook have increased since October, raising the possibility of a more generalized slowdown and a sudden pull-back of capital flows,” the International Monetary Fund’s top policy advisory committee said in a statement following a meeting on Saturday in Washington. To achieve strong global growth, “we will employ a more forceful and balanced policy mix,” the panel said.

The statement reflects policy makers’ concern that expansion will slow, after the IMF this week downgraded its global outlook again, warning that a prolonged period of slow growth has left the world economy at risk of slipping into stagnation.

Using all policy tools “is vital to stimulate actual and potential growth, enhance financial stability and avert deflation risks,” according to the communique from the panel, known as the International Monetary and Financial Committee. The panel advises the board of governors of the 189-member nation IMF.

Orthodox economists abhor plain English. “A more forceful and balanced policy mix” and “using all policy tools” are IMF code for – we need to add a lot of fiscal stimulus by increasing government spending.  The IMF, for decades, has been the worst of the austerity hawks.  So, given the IMF advice to move to increase fiscal stimulus, what is the eurozone doing to end its daily flogging of Greece through austerity.

Greece’s creditors are considering seeking extra austerity measures that would be triggered if Athens misses its fiscal targets, in a bid to bridge differences between Europe and the International Monetary Fund and break a deadlock threatening to unravel the Greek bailout.

Under the proposal, say officials involved in the discussions, Greece would have to sign up to so-called contingency measures of up to about €3 billion, on top of the package of about €5 billion in tax increases and spending cuts Greece and its lenders are already negotiating.

The country would only have to implement the extra measures if falls short of targeted budget surpluses for coming years that were set out in last year’s bailout agreement, the officials say.

The idea, which has support from the eurozone’s dominant power, Germany, hasn’t yet been agreed upon, and officials on the creditors’ side say it would be politically hard for Greece’s embattled government to swallow.

So, if as before austerity cripples Greece’s growth and causes it to miss the austerity budget targets demanded by the troika, the eurozone plans to demand that Greece commit to even more destructive “extra” austerity.  The eurozone’s austerity policies demonstrate the power of ideology over economics.

Today’s blog by Bill Mitchell suggests customer actions against Time Magazine for publishing an article that amounts to a hard push for austerity in the USA. Read it at;
http://feedproxy.google.com/~r/economicoutlook/FYvo/~3/LGCGCTOfDPs/?utm_source=feedburner&utm_medium=email

Ideology trumps sanity, but we knew that from history. There are so many examples to choose from everyone can pick their favorite and we might not have any duplicates.

2 thoughts on “The Austerity Beatings of Greece Will Continue”