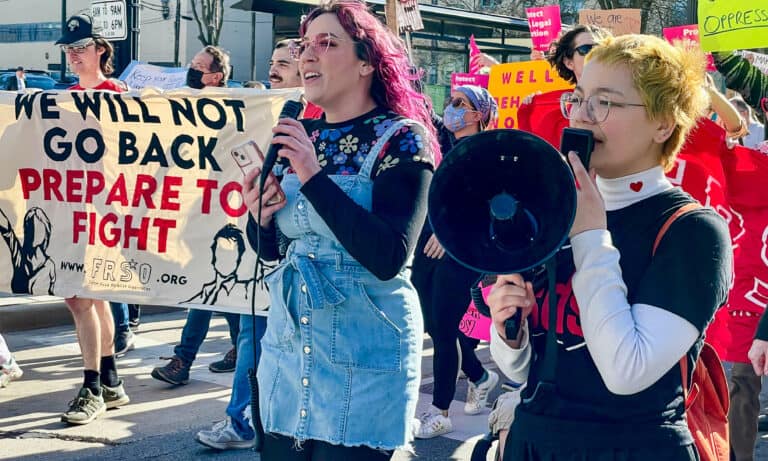 “This Was Not a Surprise”

How the Pro-Choice Movement Lost the Battle for Roe

As all eyes were on the U.S. Supreme Court on Tuesday after a leaked draft majority opinion indicated it is planning to overturn Roe v. Wade, ProPublica spoke with journalist Joshua Prager, who spent 11 years dissecting the landmark case that guaranteed abortion rights for women across the country. For his acclaimed book “The Family Roe: An American Story,” Prager interviewed upwards of 500 people including key figures on both sides of the case, most notably its plaintiff, Norma McCorvey, who was better known as Jane Roe. In delving into the untold story behind her life, those of the children she gave birth to and the monumental case, Prager unfurled the decadeslong history of the American war over abortion.

Prager said indicators of the justices’ leanings were clear while observing arguments in Dobbs v. Jackson Women’s Health Organization, a case challenging a 2018 Mississippi law prohibiting most abortions after 15 weeks’ gestational age, which is the subject of the Supreme Court’s draft opinion. Though the Court confirmed the authenticity of the document published this week by Politico, the final vote and decision are still pending. Prager discussed why he believed the road to this week’s revelation was paved, in part, by decades of mistakes and missed opportunities made by the pro-choice movement. (In his book, Prager refers to those who support the right to abortion the way they refer to themselves, “pro-choice,” and those opposing abortion the way they refer to themselves, “pro-life.” We adhered to these conventions during our interview. The interview has been edited for brevity and clarity.)

Did you expect this day would come?

I absolutely did. Anyone who was a close follower of the issue could see that this was happening when we listened to the oral arguments in Dobbs. We knew where all of the justices stood pretty much, but there were two who we thought might go either way, Justice (Amy Coney) Barrett, Justice (Brett) Kavanaugh — two of Trump’s three appointments. And to listen to them speak and question during oral arguments in Dobbs, we could see where they were going.

What was so fascinating about this and tragic, if you’re a person who believes that Roe ought not to be overturned, was that the Supreme Court did not need Justice (John) Roberts, the chief justice anymore; the conservative bloc now doesn’t need him. They have the votes that they need 5 to 4 without him. He is an incrementalist. He is a person who respects precedent. He really cares about the image of the court, does not want it to be seen as simply a political body. And he was desperate to not actually have the headline that we had last night. He wanted to see Roe maintained, but sort of gutted. But he lost.

So this was not a surprise. If you step back further, when Roe was ruled upon in 1973, it galvanized those opposed to it. And it gave (the pro-life movement) a very simple, clear target, a new raison d’etre: We want to overturn Roe. This is the culmination of 49 1/2 years of efforts and different approaches, novel approaches. And unfortunately, again, if you are a person who believes in reproductive choice, the pro-choice did not take a lot of that seriously for many years, and they are as much to, sort of, blame for this day as the pro-life will (take) credit for.

Tell me a little more about the blame the pro-choice movement shares.

(The pro-choice movement) did not foresee a war here. NARAL’s executive director in 1973, when Roe was ruled upon, told her board after the ruling, “The court has spoken and the case is closed.” They saw this as, basically: It’s over. We’ve won.

The very, very opposite is true of the pro-life, who said: OK, now we have to think about this strategically, how will we go about overturning Roe? As a result of that imbalance, the pro-choice were playing catch up really for 49 1/2 years, as the pro-life (movement has) over and over again come up with many different ways to chip away at Roe and has been remarkably successful. Just to give you a few examples:

They also used pseudoscience in a remarkable way. They came up with this very novel approach called “post-abortion syndrome,” saying that if a woman had an abortion, an enormous percentage of the time, she would suffer psychologically as a result of that. That’s not true. In fact, the opposite is true. The majority of women who have abortions express relief as opposed to regret. If there is something that causes women grief, the studies show, it is relinquishing their child to adoption. These were all pro-life weapons in attacking Roe, and over and over again, you had the pro-choice movement outfoxed.

In the early 2000s, one of the attacks on Roe was led by lawyer Allan Parker, who had represented Norma for a time. (The suit) said that Roe needed to become null and void because conditions had changed in the years since it had been filed. And the only way to file this suit was to have the original plaintiff file it. So he came to represent Norma and he filed this suit.

What ended up happening was that the pro-choice basically ignored the suit. They said that it was a sad publicity stunt, and they did not file a single brief defending Roe in this case. And it ended up introducing into the judicial system these affidavits filed by women who said that abortion harmed them. And that idea ended up going right up to the Supreme Court. Justice (Anthony) Kennedy ended up citing them in 2007 in Gonzales v. Carhart. It was evident that Parker’s lawsuit had been incredibly effective and powerful.

It shows all of the different ways in which the pro-choice have failed to meet the pro-life, have failed to repel their arguments and their strategies. And it speaks to a simple human reality that it’s much easier to try to knock something down than to defend it. What we’re going to see now is the very same problem that the pro-choice had, the pro-life now are going to have, because now you are going to see that this is going to galvanize the tens of millions of people who are horrified about what’s happening now. They now will have as simple a marching order as the pro-life used to have to reinstate Roe or to come up with another way to ensure that abortion will be legal for women across the country.

Roe was 1 day old in 1973 when Bella Abzug, who was a House representative from New York, urged Congress to codify Roe. She basically foresaw exactly where we are today, that there was the potential legislation to erode Roe. She introduced an act: The Abortion Rights Act, H.R. 254, to bar states from creating new (laws) on abortion. Congress ignored her bill, and anyway, it was doomed to failure because Roe allowed for future legislation. It gave states the right to oppose regulations from the second trimester onward, but here we are now and people want to go back and do exactly what Bella Abzug was saying that we ought to do.

Is there any more evidence that pro-choice leaders made mistakes that allowed this to happen? Where does the pro-choice movement go from here?

It’s not only true, but something that, case in point, was embodied by Justice (Ruth Bader) Ginsburg’s decision to not step down from the court in her 80s, during Obama’s presidency. We would not be here had she done that. That is a simple fact. And that is a very painful fact, for she’s obviously the greatest hero over the course of 50 years to the pro-choice movement, but whether it was hubris or it was an inability to see that Trump might be elected or just a very human, understandable desire to hold onto a job she loved, it was nonetheless a mistake with catastrophic consequences. And that, you can say, was the final nail in the coffin for Roe, but it was also the latest in a long line of missteps by the pro-choice of failing to properly address the situation in which they found themselves.

And here we are, but again, it’s now going to flip. If you’re a person who cares about choice, that is the silver lining of this very dark, dark cloud that it is now going to galvanize in a way we have not seen in our lifetimes, those who believe in a right to choose.

1 thought on ““This Was Not a Surprise””