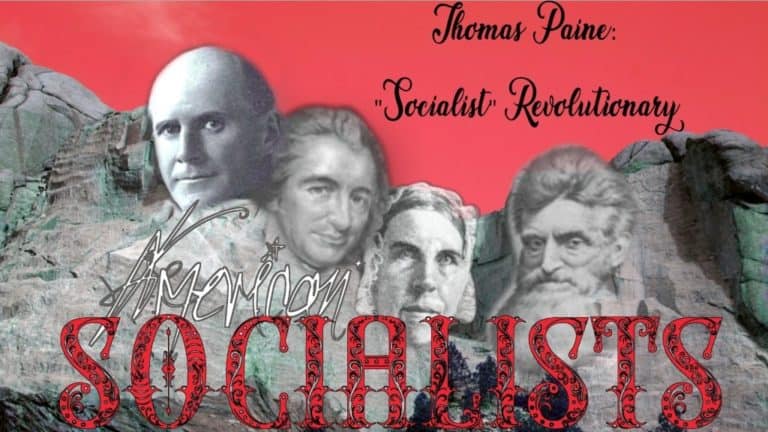 Hello Internet, I’m Jackie Fox and in my last few videos I’ve covered Capitalist Realism: Is there No Alternative? and Why You Should Be a Socialist. I’d like to top that off with a few profiles of people throughout American History who showed what Nathan J. Robinson called the ‘Socialist Ethic’ throughout all the history that happened before capitalism ended history in the 20th Century. Let’s start with the Founding Father you probably heard the least about in History class, Thomas Paine.

Paine is famous for his writing, especially the book Common Sense. This protosocialist’s manifesto is said to have paved the way for the American Revolution by swaying moral sensibilities to favor the colonists over the Monarchy. Though, I say ‘protosocialist’ for good reason, over a century before writers like Marx popularized the term, Paine showed a socialist ethic in his revolutionary works like Common Sense.

Before we talk about that though, some of his other writing stands out to me, like when he wrote in a magazine that slavery should be abolished a full 100 years before it would be. Paine was also involved in the French Revolution that by many accounts was the first act of socialism in history. Paine published The Rights of Man in response to the events that were beginning to unfold there, meaning his writing was important in not one but two revolutions. He also opposed the private ownership of land and supported universal suffrage, which was another issue over a century ahead of its time.

Paine speaks to the need for a functioning society to enable us to do things greater than one can do alone.

“The strength of one is so unequal to their wants, and their mind so unfitted for perpetual solitude, that they are soon obliged to seek assistance and relief of another, who in their turn requires the same. Four or five united would be able to raise a tolerable dwelling in the midst of a wilderness, but one might labor out the common period of life without accomplishing anything.”

While he decries the monarchy, he also recognizes that class is the source of societal inequality. He says humanity:

“being originally equals in the order of creation, the equality could only be destroyed by some subsequent circumstance; the distinctions of rich, and poor… But there is another and greater distinction for which no truly natural or religious reason can be assigned, and that is, the distinction of people into Kings and Subjects.”

In its second chapter, Common Sense makes an unexpectedly powerful Christian argument against the monarchy to really drive home the “no truly… religious reason” part. He believed some scale of revolt against English rule would be an eventuality, and because of this, reconciliation with the Crown would lead only to a civil war within the fledgling colonies, “the consequences of which may be far more fatal than all the malice of Britain.”  Instead, he found it to be a safer course of action for the colonies to stand together in solidarity and dare England to mount the sort of naval invasion they would need to conquer a land so much larger than its own, and so far away. Thinking long term, he also advocated for a powerful defensive Navy.

Like many other Founding Fathers, Paine expressed a gratitude for the usefulness of hemp to our young nation as an industrial resource saying, “hemp flourishes even to rankness, so that we need not want cordage.”  I guess rankness was just 1700’s for dankness, but I digress.

America’s original T. Paine also used Common Sense to lay a lot of the groundwork for the American government to come. His proposals were in line with and perhaps influential of the views of the other founding fathers, but in at least one notable way they’re considerably different than our current norms and that was the number of representatives we would have in Congress. Paine argued that there should be at least 30 representatives per state in the national assembly, whereas now our minimum is only three. With the average population of a colony in 1776 being around 200,000 people, this works out to a 1:6,667 ratio of Congresspeople to Americans at a minimum. Currently, we have one Congressperson to around every 615,450 people.

He also advocated for reelecting the President annually with 12 candidates per election, one from each colony excluding the colony whose candidate won in the previous year, meaning no one could spend two consecutive years in office.

Of course, only having a single representative was worst of all, “the palaces of kings are built on the ruins of the bowers of paradise.” Much of his writing is nearly as anarchistic as socialistic in the way that it looks at the justification of power hierarchies: “Society in every state is a blessing, but government, even in its best state, is but a necessary evil in its worst state an intolerable one; for when we suffer, or are exposed to the same miseries by a government, which we might expect in a country without government, our calamities is heightened by reflecting that we furnish the means by which we suffer!”  This, perhaps, is as much a product of the anti-monarchical revolution he was writing for at the time as anything else, which is to say that at the time, for a man like Paine, questioning the justifications of the power of Kings was really just common sense. If we are to consider Paine a socialist, he would likely be the most revolutionary of the socialists I will speak of in this series.

“The sun never shined on a cause of greater worth. ‘Tis not the affair of a city, a country, a province, or a kingdom, but of a continent- of at least one eighth part of the habitable globe. ‘Tis not the concern of a day, a year, or an age; posterity are virtually involved in the contest, and will be more or less affected, even to the end of time, by the proceedings now. Now is the seed time of continental union, faith and honor. The least fracture now will be like a name engraved with the point of a pin on the tender rind of a young oak; The wound will enlarge with the tree, and posterity read it in full grown characters.”