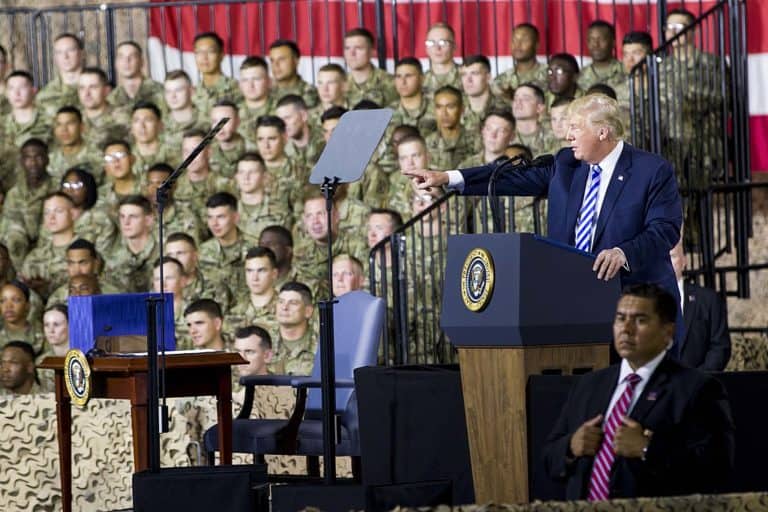 This is the second article in a series about fascism and how it relates to America. Here is the link to part 1.

It is not uncommon to see Trump portrayed as a fascist. The presidential election between Donald Trump and Joe Biden was often framed as a battle against fascism. Dr. Cornel West said, “What we got to vote for [was] the mediocre, milquetoast neoliberal centrist because he’s better than fascism, and a fascist catastrophe is worse than a neoliberal disaster.” Congresswoman Alexandria Ocasio-Cortez said, “We need to win in November. November is about, in my opinion, stopping fascism in the United States. That is what Donald Trump represents.” Marc Brodine, Chair of the Washington State Communist Party USA, wrote an article entitled, “Want to stop fascism in America? Defeat Trump in November.” These portrayals all equated defeating Trump with defeating fascism.

The problem with this framing is that it takes a far too narrow view of defeating fascism. Trump is a figurehead of fascism, but he does not represent the systems that create a fascist environment. Trump is full of fascist rhetoric, as his recent speech inciting violence at the capitol illustrates. Indeed, Trump embodies the definition of fascism given by Jason Stanley in a recent NPR interview, “So fascism is a cult of the leader who promises national restoration in the face of supposed humiliation by minorities, liberals and immigrants.” There can be no doubt that Trump is a fascist threat. But defeating Trump is not synonymous with defeating fascism – it is not enough to remove one man, the system that enables fascism must be replaced as well.

It is dangerous to consider the removal of Trump a victory over fascism. While Trump spoke like a fascist, his policies were primarily those of neoliberalism. As William Robinson describes, “The Trump regime’s public discourse of populism and nationalism, for example, bore no relation to its actual policies. In its first year, Trumponomics involved deregulation – the virtual smashing of the regulatory state – slashing social spending, dismantling what remained of the welfare state, privatizations, tax breaks to corporations and the rich, and an expansion of state subsidies to capital – in short, neoliberalism on steroids.”  (Robinson, 2019, 855)

The Democratic establishment happily voted for many of these policies including funding for ICE, extending the Patriot Act, and approving increasingly large military budgets. When it comes to policy, Trump differed little from Reagan, Clinton, the Bushes, and Obama. He was primarily a tool for corporations and the military industrial complex, though at times he bucked their wishes on such matters as the TPP and withdrawing troops from Afghanistan. As Walden Bello explains, “Neoliberalism has been central to the concurrent and seemingly irreversible economic crisis of the United States.”  Trump was a continuation of neoliberal policies – not a departure from the status quo. Removing Trump without removing neoliberalism is a recipe for disaster.

While his policies reinforced status quo neoliberalism, Trump departed from the usual neoliberal politician in that he was open about his white supremacy and racism. This gave voice to a white supremacist movement that has always existed in the United States. Much like Woodrow Wilson did with the KKK, Trump empowered the far-right extremists such as the Proud Boys, Three Percenters, Boogaloo Bois, the Right Stuff, VDARE, and other hate groups. This empowerment of white nationalist movements is a great part of why Trump’s rhetoric is so dangerous.

An FBI report shows that white supremacist extremist groups were responsible for more homicides between 2000-2016 “than any other domestic extremist movement.” Many of these groups have ties with law enforcement and military. As Michael German documented, “In a 2019 report, the Plain View Project documented 5,000 patently bigoted social media posts by 3,500 accounts identified as belonging to current and former law enforcement officials.”

When the “Stop the Steal” insurrectionists entered the capitol, members of the capitol police were seen mingling with them and taking selfies. In Kenosha, Wisconsin, police tossed a water bottle to armed militia members and told them, “We appreciate you being here.” That same night, Kyle Rittenhouse murdered two BLM protesters. The Trump administration directed Federal law enforcement to “to make public comments sympathetic to Kyle Rittenhouse.”

Trump’s ability to incite far right violence came to a head at the US Capitol on January 6. It has been reported that 28 law enforcement officers from 12 states were at the rally there.   As historian Timothy Snyder said in an interview with Democracy Now,

“These are several kinds of white supremacist and extreme right-wing paramilitaries who are appearing at the Capitol. They are getting mixed in now with members of the police. And this is extremely dangerous, because it’s that mixture of outside-the-state, outside-the-law paramilitaries and police forces, or policemen who start to go over on the other side, which is very characteristic of the way fascist regimes come to power.”

With more rallies and violence planned, these groups are the true fascist threat, not just the figurehead of Trump. Trump simply emboldened and unleashed the hostility of the white nationalists that had been boiling underneath the surface. This violent hatred will remain even as Trump leaves the presidency.

In addition to the empowerment given by Trump, these fascist movements have been gaining momentum due to a growing sense of victimhood. Members of the petite bourgeoisie and working class are feeling justifiably victimized. Rather than blaming the real culprit, late-stage capitalism, they are instead using immigrants and minorities as scapegoats. This is the appeal of fascism and why so many people follow Donald Trump’s lead. His hateful rhetoric played on the perceived victimization of millions who were already predisposed to racism and white nationalism through living in a settler-colonial state. As Trotsky described, the cycle leading to fascism includes,

“the despair of the petty bourgeoisie, its yearning for change; the collective neurosis of the petty bourgeoisie, its readiness to believe in miracles, its readiness for violent measures; the growth of hostility towards the proletariat, which has deceived its expectations. These are the premises for a swift formation of a fascist party and its victory.”

This is an accurate description of Trumpism and the fascist threat it poses. The disenfranchisement of the petty bourgeoisie by capitalist crisis creates an environment ripe for fascist movements.

In an angry tirade against immigrants and the inaction of Democratic politicians, Ashli Babbitt, who died during the failed insurrection said, “What we do have is a massive amount of pissed off people like I am because you guys won’t sit down and do your jobs.” This is the insidious nature of fascism – the ability to tap into the anger of the petite bourgeoisie and turn it into violence against immigrants, minorities, and the proletariat rather than against the ruling class. As Georgi Dimitrov explained, “What is the source of the influence of fascism over the masses? Fascism is able to attract the masses because it demagogically appeals to their most urgent needs and demands.”

Donald Trump campaigned and won in 2016 promising to repeal Obamacare and “Replace with something terrific.” While this was a lie, it did not stop him from gaining votes in 2020 even in a losing campaign. Neoliberal policies do nothing to appeal directly to the material needs of the people – and the promise of something different from the status quo was an offer that many could not resist. There are many angry people like Ashli Babbitt and when neoliberal Democrats offer them nothing, they are likely to turn to the false hope of fascist promises of a Donald Trump or Ted Cruz or Josh Hawley. The threat of fascism did not end with Donald Trump’s defeat and it is only continuing to grow today.