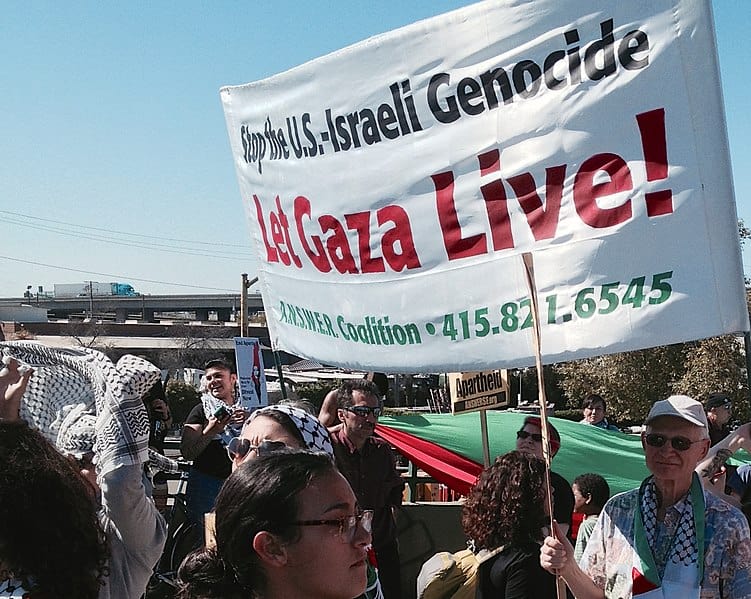 The simple answer to this question is apartheid, settler-colonialism, and genocide – all supported by the United States and the Biden administration. The escalation in the fighting has been primarily one-sided – as the Palestinians do not have an actual military. While top United States officials continually claim Israel has a right to self-defense, they do not argue the same for Palestine.

Reports are coming in from Gaza that Israel is using white phosphorus weapons illegally on Palestinian civilians. Israel has previously admitted to using white phosphorus in 2009. While technically its use is not banned, the use of these shells against civilians is against international laws of warfare. Common Dreams is reporting that the Biden administration is blocking the UN from releasing a statement calling for a ceasefire. There is no end in sight for the war.

These latest acts of war started when Israel attacked the Al Aqsa mosque in Jerusalem on Friday, May 7. This is one of the holiest sites for Muslims and hundreds were gathered there to observe the last Friday in Ramadan. The Israeli police assaulted them with rubber bullets and stun grenades injuring at least 126 Palestinians. Hamas responded by firing six rockets into Israel on May 9 – two were intercepted by the Iron Dome defense network, two fell into open spaces, and two landed in the Gaza Strip. Israel responded with air strikes in which 24 Palestinians, including nine children, were killed and at least 106 wounded. Hamas reportedly responded by firing over 600 rockets, killing two Israelis and injuring 36. Israel has continued with further airstrikes and the reported use of white phosphorus. Another 16 Palestinians were killed – Israel claiming them all to be members of Hamas including top leadership. As of Thursday, May 13, the death toll has climbed to over 100 killed in Israeli attacks on Gaza with hundreds more injured. According to Al Jazeera, after the latest bombardment on May 14, “At least 122 Palestinians, including 31 children, have been killed and more than 900 wounded since hostilities flared up on Monday.”

US State Department spokesperson Ned Price responded with the following statement, “Israel has the right to defend itself and to respond to rocket attacks. The Palestinian people also have the right to safety and security just as Israelis do.” Press Secretary Jen Psaki said that “Biden’s support for ‘Israel’s security, for its legitimate right to defend itself and its people, is fundamental and will never waver.’” This begs the question – how is attacking a mosque defending Israel? Of course, it is not. But Biden is a self-proclaimed Zionist and has not denounced the illegal Israeli occupations and attacks on the Palestinian people. In 2013, Biden said, “If there were not an Israel, we would have to invent one to make sure our interests were preserved.” Biden has not changed, he still supports the apartheid policies and state terrorism of Israel and their oppression and slaughter of the Palestinian people.

Biden is not the only government official who is a pawn for the criminal Israeli regime. The American Israel Public Affairs Committee (AIPAC) holds influence over most of Congress. In 2017, Kamala Harris spoke at their annual conference saying, “Let me be clear about what I believe. I stand with Israel because of our shared values, which are so fundamental to the founding of both our nations.” Her speech in 2018 was off the record and she skipped the 2019 conference because it would have looked bad when she was running for president, but she met in private with AIPAC leaders anyway, tweeting out, “Great to meet today in my office with California AIPAC leaders to discuss the need for a strong U.S.-Israel alliance, the right of Israel to defend itself, and my commitment to combat anti-Semitism in our country and around the world.”  It is clear where her loyalties lie and her lack of a response to the ongoing genocide of the Palestinian people reflects this.

House Majority Leader Steny Hoyer was a keynote speaker at the AIPAC conference in 2020 alongside Mike Pence, Senator Cory Booker, and Michael Bloomberg. Senate Majority Leader Chuck Schumer spoke at the conference in 2019. Speaker of the House Nancy Pelosi also spoke in 2019 and responded to recent events with the following statement, “I condemn the escalating and indiscriminate rocket attacks by Hamas against Israel. Israel has the right to defend herself against this assault, which is designed to sow terror and undermine prospects for peace.” These echoed the words she said at the AIPAC conference in 2019, “Israel and America are connected now and forever. We will never allow anyone to make Israel a wedge issue.” The Democratic establishment showed this to be true when they united against Ilhan Omar when she tweeted out against AIPAC’s influence.

In 2020 JStreet, a top pro-Israel lobbying group, spent over 2 million dollars on contributions. Here is a partial list from OpenSecrets:

In total, they gave to 130 members of the House and 26 members of the Senate, all Democratic except for $910 given by individuals working for JStreet to Bernie Sanders. While AIPAC itself doesn’t give directly to congress, its purpose is to convince congress to support Israel. As a former top official of AIPAC, Eric Gallagher, said, “Everything AIPAC does is focused on influencing Congress.” Joe Biden’s latest budget proposal includes 3.8 billion dollars to Israel. It seems that AIPAC’s lobbying is working quite well for the apartheid regime.

As Noam Chomsky said in an interview with Democracy Now:

Israeli intervention in US elections vastly overwhelms anything the Russians may have done. I mean, even to the point where the prime minister of Israel, Netanyahu, goes directly to Congress, without even informing the president, and speaks to Congress, with overwhelming applause, to try to undermine the president’s policies—what happened with Obama and Netanyahu in 2015.

Yet all the focus has been on Russia, not on Israel. The United States is only outraged when it suits their own agenda and calling out Israel is not on that agenda. When Russia moved troops to the Ukrainian border, the Biden administration responded by ordering ships into the Black Sea. When Israel carries out airstrikes on residential buildings in Palestine, the US response is that Israel has the right to defend itself.

Instead of focusing on those with power, recent major backlash has been on New York City mayoral candidate Andrew Yang for his pro-Israel statements. The hashtag #YangSupportsGenocide was trending after he tweeted:

Congresswoman Alexandria Ocasio-Cortez responded by harshly criticizing his support of Israel, but has remained silent on President Biden, VP Harris, Nancy Pelosi, Chuck Schumer, and other establishment democrats in positions of power. The Intercept published a piece entitled “Andrew Yang Can’t Explain When Asked Why He Supports Israel Bombing Gaza.” While Andrew Yang certainly should be criticized for his statement, even if he wins the mayoral race, he will not be able to strongly influence the United States’ foreign policy toward Israel. Only 17 members of congress including AOC and Ilhan Omar voted against the 2019 resolution condemning the Boycott, Divest, Sanctions (BDS) movement against Israel. Although Bernie Sanders voted against this resolution, he does not support the BDS movement. The current focus should not be on Yang, but rather one the members of congress who have the power to change policy. And the blame starts at the top with President Biden, the commander in chief. The entire population should be outraged by the recent events in Gaza and the current administration’s response to them. There have been some solidarity protests, but these should be happening in every city on a scale similar to those against the Iraq War.

The fight for socialism is an international class struggle. The Industrial Workers of the World slogan “An injury to one is an injury to all” applies to all those oppressed in the class struggle. Socialists and the lower classes throughout the world must unite behind the fight to free Palestine. Taking on the corrupt, sold out politicians in the United States government is an essential part of this struggle. The United States also must decolonize at home. What is happening in Palestine reflects the similar actions the United States took against indigenous populations. Settle colonialism, imperialism, and capitalism must be opposed at home and abroad. As Navajo artist Remy has said, “Our resistance is global, therefore, so are we.”

The Intercept: Deconstructed – The Case Against AIPAC