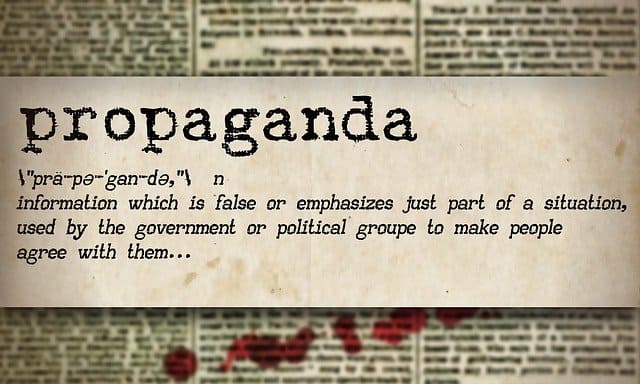 The Smith-Mundt Act of 1948 authorized the dissemination of US state department propaganda to foreign nations deemed a threat to American democracy. This act has been a useful tool for intelligence operatives who have repeatedly sought to stamp out populist revolutions in countries with access to valuable natural resources. Through the spread of propaganda and the arming of US aligned insurgency groups, the US has been able to foment confusion and discord in foreign populations resulting in unwinnable political battles, power struggles and weak leadership representing the working people’s interests. In the power vacuum of their creation, the US uses its wealth and military strength to install leadership friendly to their own interests.

In the end, the natural wealth which rightly belonged to the inhabitants of a targeted nation are funneled through corporate and state interests to the US. This is a shortened part of the story of US Imperialism post-WW2 and is widely written on and discussed. However, an often glossed over fact is that in 2012, the Smith-Mundt Act was altered to permit the dissemination of state department propaganda directly to US citizens.

It is well documented that control of the US government does not actually lie in the hands of its voters, but rather in those of large corporate interests. It is nearly impossible to win and hold political office without campaign financing from large corporate interests, and we all know that that money isn’t free. From here, it shouldn’t be much of a leap to see that the state propaganda being pushed to the masses will largely be devoid of any democratically articulated goals, and will instead seek to further strengthen the power and control of the corporatocracy, which has long undermined real democracy.

A troubling trend in today’s propaganda is the attempt by mainstream media to frame the decay of our society through the lens of identity politics. The message one is meant to take from center left-leaning news outlets and “wokevertising” is that the massive struggles we’re facing (the COVID crisis, housing and food insecurity, unaffordable costs of healthcare and education to be specific) are due directly to rampant white nationalism and sexism. I’m in no way denying the existence, danger and abhorrence of these ideologies, but to stop here is to not understand the true scope and source of our problems.

This obfuscation of the effects of neoliberalism and anti-worker economic policies in our news and media are a deliberate attempt by the elites to shift the blame for the destruction of The American Dream and the lives of the poor at large from those who have benefited and grown rich as a result of imperialism, racism, sexism, wage slavery and a total destruction of public spaces, onto the poor. These propaganda campaigns are now villainizing white men as public enemy number one, much in the way black drug users were scapegoated in the 80s and 90s for the crack epidemic inflicted upon poor communities by the US government. And while it is not debatable that certain white men are absolutely to blame for the ills we’re facing, to paint with such a broad brush lets those with wealth and power, those who are currently benefiting from all the misery, off the hook.

Like most sane people, I do whatever I can to avoid advertising. Not because I believe advertising itself to be inherently good or evil or anything like that (although it has definitely evolved into a pretty nefarious industry), but just because it’s so extremely obnoxious. But I’ve been watching the NFL playoffs, like a good, little consumer, and it’s hard not to notice this toxic blame shifting as it is featured in nearly every commercial break. Even in the game itself, you’ll see players’ jerseys brandishing messages like, “stop hate” or “end racism.” My question to the ownership and advertisers pushing this social activism are the following: Why will the NBA not condemn the genocide in China? Why do so many former NFL players not have an income guarantee, after destroying their bodies and minds playing a game that disproportionately benefits owners and advertisers instead of the people who are literally risking their health and wellness? What is your actual plan to fix society, and have you ever thought that your enormous and excessive wealth is the direct result of exploitation and destruction of the middle class?

If you watch the Super Bowl this weekend, take a note of how many times you hear the message, “We’re all in this together.” When you hear that, know that, in fact, we are all in this together – but the people pushing these messages have seen their wealth grow through the pandemic while average people struggle to survive. We may technically be traveling through space and time together in these moments, but we don’t come remotely close to sharing equal blame in creating this hellscape we’re all tasked with navigating. Those with great wealth and power have come into their positions in life as a direct result of exploitation and destruction of the wealth, rights, and power of the working class. Poverty leads to crime, leads to dehumanization of those who commit crimes out of desperation.

To believe what we’re living through is totally the fault of a nation of poor, ignorant, pussy-grabbing white supremacist Trump supporters is to believe elitist propaganda which seeks to exonerate the real criminals and wealth supremacists. The true culprits are those who have taken far more than they need, and tell the rest of us there’s just not enough to go around.