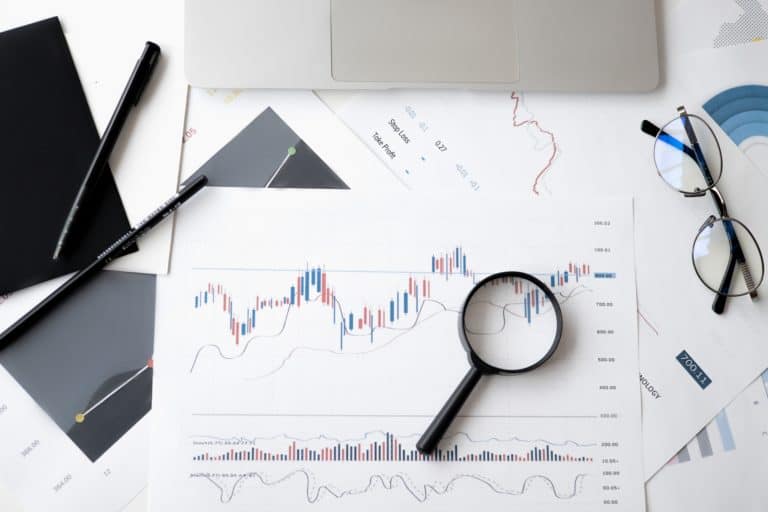 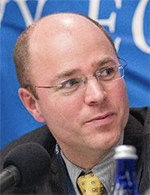 For analytical purpose, the balance sheet of the Fed can be presented as follows:

Figure 1. A Simplified Balance Sheet of the Federal Reserve System

Table 1 shows the actual balance sheet of the Federal Reserve System. It sums the assets, liabilities, and capital of all twelve Federal Reserve banks and consolidates them (i.e. removes what Fed banks owe to each other). The main asset is Treasury securities that amounted to about $718 billion in January 2005.

The main liability is outstanding Federal Reserve notes (FRNs) issued (i.e. held outside the twelve Fed banks’ vaults) that amounted to $718 billion in January 2005. This line in the balance sheet includes all FRNs issued regardless who owns them, which is different from L1 in the balance sheet of Figure 1. Indeed, for analytical purpose, economists like to measure the amount of FRNs “in circulation,” that is FRNs held outside the vaults of private banks (“vault cash”), of the Federal Reserve banks, and of the U.S. Treasury. A distant second liability was reserve balances (aka deposits of depository institutions at the Fed) that amounted to $31 billion.

Capital consists mostly of the annual net income of the Fed (“surplus” line) and the shares that banks must buy when becoming members of the Federal Reserve System (the “capital paid in” line). These shares are not tradable, cannot be pledged (i.e. banks cannot use them as collateral and cannot be discounted), do not provide a voting right to banks, and pay an annual dividend representing 6% of net income of the Fed.

Any left-over net income is transferred to the U.S. Treasury and the Secretary of the Treasury can use the funds only for two purposes: to increase Treasury’s gold stock or to reduce outstanding amount of treasuries (aka “public debt”) (For detail see Section 7 of Federal Reserve Act). 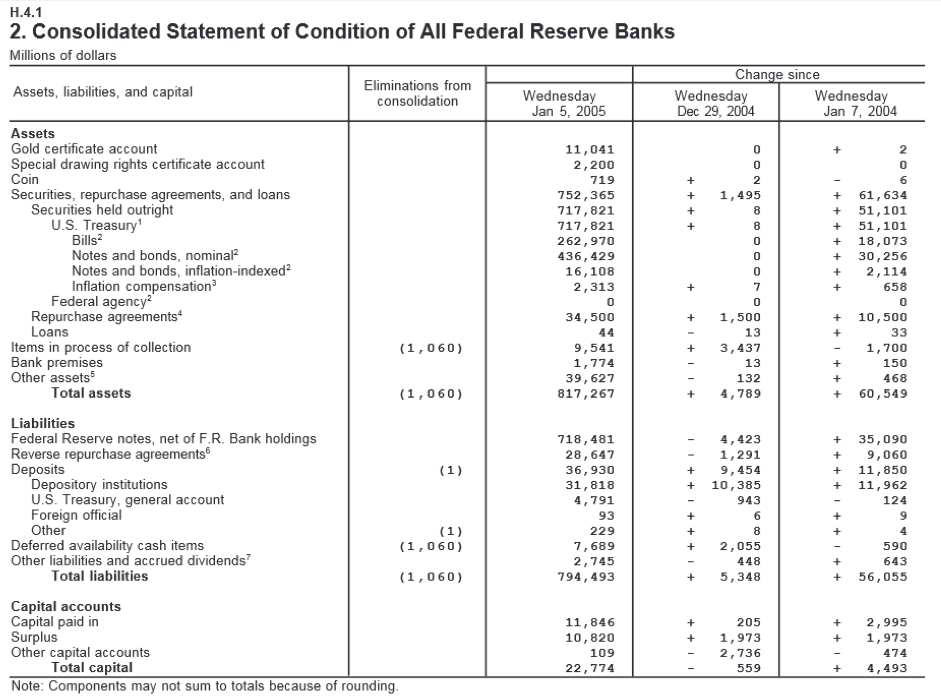 One immediately notes that the central bank does not own any cash or a bank account in USD, i.e. there are no domestic monetary instruments on its asset side besides a few Treasury currency (United States notes, etc.) and some coins (Fed buys all new coins from U.S. mint at face value and releases them at the needs of the economy); it acts as coin wholesaler for the Treasury). Gold certificate account (first line under assets) are just electronic entries to record the safe keeping of some of the gold stock owned by the U.S. Treasury (The Fed does not own any gold). The Fed does own some foreign monetary instruments (SDR accounts, accounts at foreign central banks, foreign currency).

When the Fed receives a net income in USD it does not receive any cash flow, i.e. no monetary asset goes up. What goes up is net worth. How does that occur? Suppose that banks request an advance of funds of $100 repayable the next day with a 10% interest. Today the following is recorded:

The next day banks must pay back $100 and an additional $10. The full repayment of the principal (i.e. outstanding amount due) leads to:

These two T-accounts are normally consolidated into one:

Here we go! The Fed records an income gain!

How does it transfer that to the Treasury? Easy! A Fed employee types the following on a keyboard:

The transfer of funds between accounts is like keeping scores by changing amounts recorded on the liability side. Banks lost 10 points, Treasury gained 10 points.

In Table 1, you will note a line “loan” on the asset side and you will often hear and read—even in Fed documents—that the Fed lends reserves to banks. You will also notice that in the balance sheet of Figure 1, there is no “loan” but instead there is “A2: Domestic private banks’ promissory notes.”

Throughout this blog I will not the use the words “loan,” “lender,” “borrower,” “lending,” “borrowing,” when analyzing banks (private or Fed) and their credit operations. Banks don’t lend money, and customer don’t borrow money from banks. Words like “advance,” “creditor,” “debtor,” are more appropriate words to describe what goes on in banking operations.

The word “lend” (and so “borrow”) is really a misnomer that has the potential of confusing—and actually does confuse—people about what banks do. “Lending” means giving up an asset temporarily: “I lend you my car for a few days” is represented as follows in terms of a balance sheet:

Alternatively, if someone goes to see a loan shark for his gambling habits and borrows $1000 cash, then the balance sheet of the loan shark changes as follows

The loan shark loses cash temporarily—it does lend cash—and if the gambler doesn’t repay quickly with hefty interest, the loan shark comes with a baseball bat and breaks his legs (or worse!). 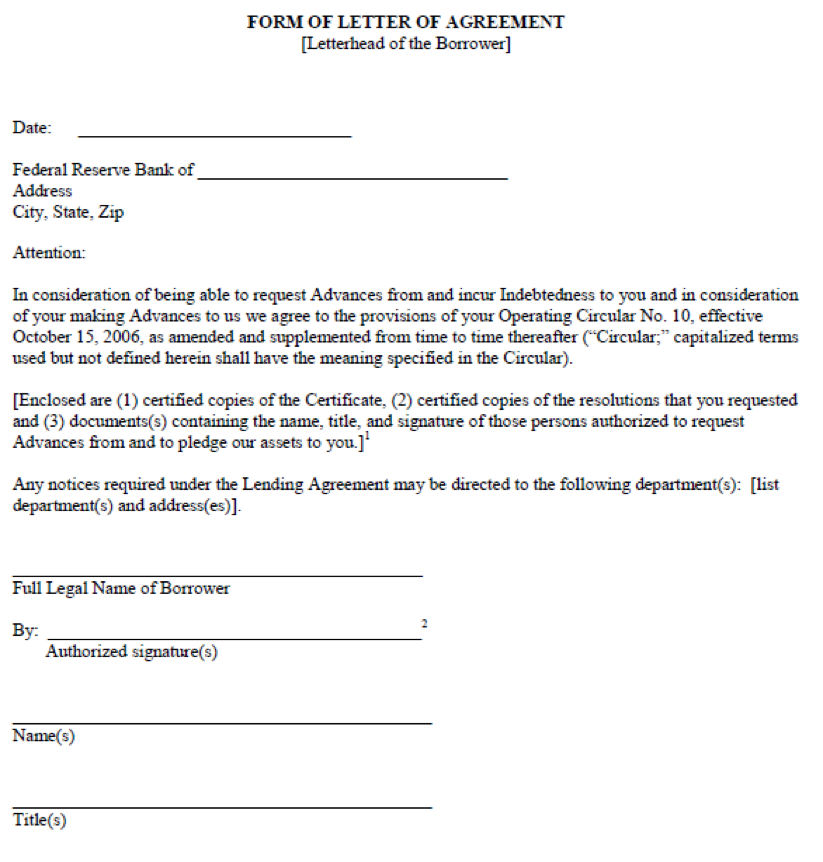 Figure 2. Template of the promissory note issued by banks to the Discount Window
Source: here

In this legal document (and others attached to it), a bank recognizes that it is indebted to the Fed because the Fed provided an advance of funds (i.e. credited the bank’s reserve balance). Now the bank promises to comply with the terms of the contract (that details time table for repayment, interest, collateral requirements, covenants, what happens in case of default, etc.). The Fed keeps a copy of this document in its vault, it is an asset for the Fed (A2 in Figure 1) because the bank made a legal promise to the Fed. The Fed can force the bank to comply with the demands of the promise.

The main point is that, when the Fed provides funds to banks, the Fed is not give up something it had first to acquire. The Fed does not use “tax payers’ money” (or anybody else’s money) as we often heard during the 2008 financial crisis when large emergency advances had to be provided to many financial institutions. When the Fed provides/advances funds to banks, it just credits the accounts of banks by keystroking amounts. Post 10 shows that the same logic applies to private banks.

This is what happens when banks spend $100 from their reserve balances:

Now this T-account is incomplete because it is missing the offsetting operations. What are the possibilities? Below are three of them:

1. Banks ask for FRNs to put in their vault

2. Banks settle taxes (theirs or that of the US population)

3. Banks participate in an offering of GSE securities

You may think of other ways to transfer the $100 on the liability side of the Fed. Once again, the Fed is basically keeping scores by transferring funds among account holders and keeping a tab.

The main point is that banks cannot buy anything with reserve balances from anyone in the domestic economy except from each other and other Fed account holders. Banks as a whole cannot use reserve balances to acquire any security issued by the private sector or any goods and services. More reserves do not provide banks more purchasing power in the domestic economy to buy existing bonds, stocks, houses, etc.

If banks wanted buy something from someone in the domestic economy with Fed currency, they would have to get more vault cash first (case 1 above). Post 10 shows that banks do not operate that way to make payments. Nor do banks lend cash (they are not the loan shark of point 2).

Can the Fed be insolvent or illiquid?

No the Fed cannot “run out of dollars” because it is the issuer of the dollar. The Fed could have a negative net worth and still be able to operate normally and meet all its creditors’ demands.

The main role of net worth in a private balance sheet is to protect the creditors (the holders of the liabilities). Think of the house example in Post 1. The house was funded by $80k of funds obtained from a bank and $20k down. If the mortgagor defaults, the bank can foreclose and sell the house. With a net worth of 20k, the home price can fall by 20% before the bank is unable to recover the funds advanced to the mortgagor. If the down-payment had been 0% (mortgage was $100k), when the bank forecloses it does not have any financial buffer against a fall in house price.

For the Fed, this is financially irrelevant, although politically it may raise some eyebrows in Congress. It can meet all payments due denominated in USD at any time, no matter how big they are.

That is it for today! Next post will continue to study the central bank by focusing on the “monetary base.”

This blog post was originally published on New Economic Perspectives 01-16-2016.