Semantics Regarding ‘Taxes Do Not Fund Spending’

“How Congress, the Fed, and the Treasury Actually Operate. How Taxes Are Destroyed in Monetarily Sovereign Nations. Dispelling all Conspiracies and Other Unfortunate Misguided Stories.” — Steven D. Grumbine

Question: So where did the money originate from if Congress holds the purse strings? Is Congress just another capitalist entity? I don’t know of any other system where tax is not used via the government.

Answer: Congress delegated its constitutional power to create money to the Fed and the Treasury. The Treasury retains the power to “coin” money in the narrow sense of actually creating coins and paper currency. The US Mint performs this function for the Treasury. The Fed must order the created currency from the Treasury for use in the banking system and distribution to the economy. The Fed was delegated the authority to create high-powered additions to checking account balances (i.e. reserves) and to order paper money from the Treasury, which only it can issue as Treasury Notes. The Treasury, however, retains the power to print those notes in the Bureau of Engraving and printing.

Currently, in the modern system, the Treasury only spends money into the economy that Congress has previously appropriated, mostly in the form of reserves. It adds to private balances by using keystrokes on computers that spend the reserves in its spending account.

Its spending is mandated by Congressional appropriations. That’s what’s meant by saying that “Congress has the purse strings”.

The way Treasury actually gets the money to spend when the balances in its spending account are getting low is that it either waits for the Fed to credit its account in the normal course of its business or it follows certain rules and procedures to make requests from the Fed. If the Treasury follows its legal rules and procedures and the Fed also follows its own based on legislation and the US code, then the Fed is a passive actor in this process in the sense that it has no choice as to whether or not to fill Treasury’s account as requested.

So to answer the direct question, the reserves spent to fulfill appropriations are created by the Federal Reserve through its marking up of Treasury accounts with high-powered reserves using its authority derived from Congress. Tax revenues do not directly impact this process. All that is directly involved is:

The taxes you and I pay to Treasury are important because they drain money from the economy, thus constraining the development of demand-pull inflation. They also aid the Fed in its goal of maintaining its target overnight Federal Funds Rate, which most other interest rates are pegged to. However, this draining of money from the economy is not directly involved in the funding process, so it doesn’t “fund” or “finance” federal spending. It cannot do that because our tax money is actually destroyed during the Fed’s banking processes and the money involved never reaches the Treasury spending account, which is filled only with reserves newly-created by the Fed. 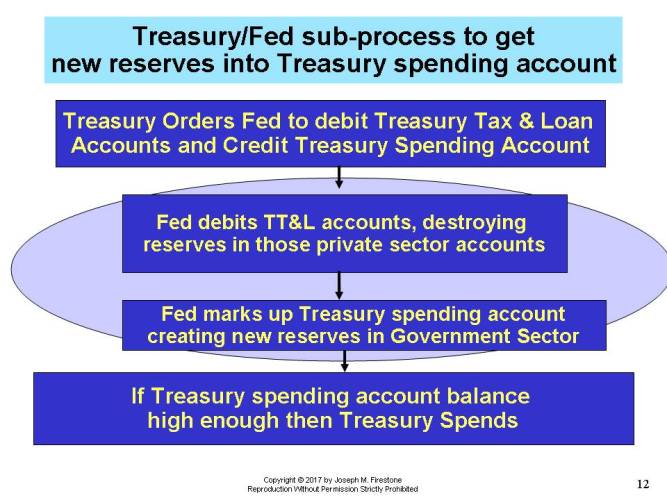 The facts of this matter are documented by Professor Stephanie Kelton, in this article and are depicted in my graphic below.Regarding the statement, “I don’t know of any other system where tax is not used via the government.” The process I’ve outlined is not restricted to the US, it is the same general process that goes on in a number of monetarily sovereign nations including the UK, Australia, New Zealand, Japan, Canada, and a number of others around the world. These nations can never have solvency issues because each can issue its own money in whatever amount they desire. Spending too much of the currency it creates can present serious problems, such as inflation or a variety of other bad effects, if they spend on the wrong things. However, again, these nations cannot be forced into insolvency by external economic or financial constraints giving them deficit spending policy space other nations do not have.