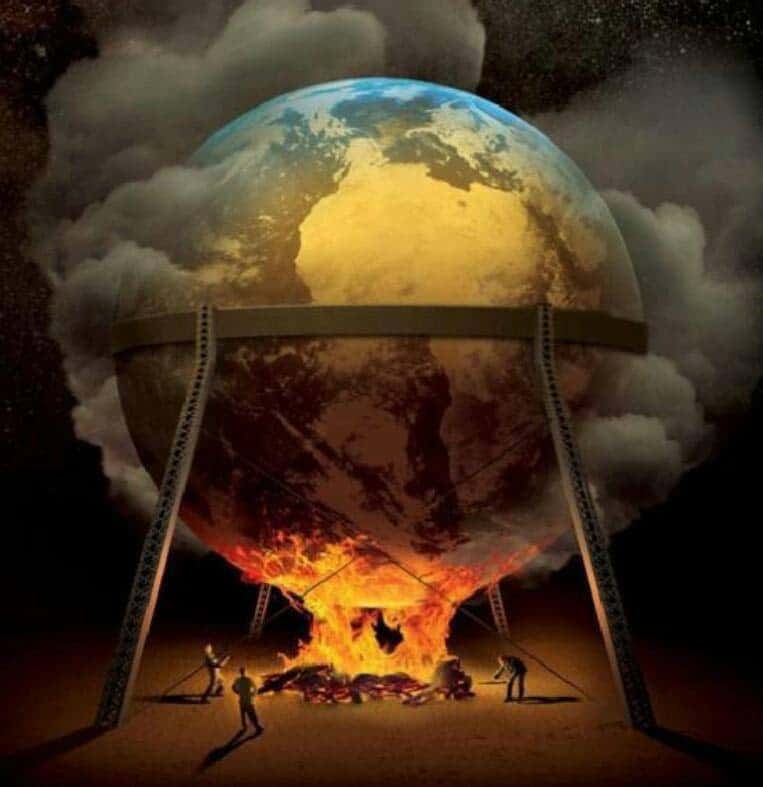 A Worn Out Welcome

Indigenous cultures, however, who stayed close to their natural environment, never traded the organic laws of nature for the inorganic laws of science. Everything they borrowed, they returned to be made available to borrow again. They were never cursed with the compulsion to seek dominion over the earth and never driven to develop the tools to realize such domination.

The rest of us, however, exist somewhat or completely, outside the realm of the natural order. We are condemned to satisfy our ego and to engage in enterprise, whether or not desirable or gainful and often detrimental or in no way beneficial to nature.

We require the constant provision of utilities, products, and services. When we are not actively repurposing the earth, we are passively consuming the spoils of that which was repurposed. Whether intentionally or in our apathy, we show disrespect and disregard for the sanctity of the natural world and for the few sanctuaries that remain.

We burn down the rainforests and extinguish exotic life forms that exist nowhere else, to ranch ever more livestock, to feed ever more meat-eaters.

In the purest sense of projected hypocrisy, the rapacious New World settlers who pillaged and plundered their way from the East coast to the West described the indigenous societies they slaughtered along the way as “savages” .

Like a drop of bacteria placed in a petri dish of glucose solution, we went forth and multiplied, forever exhausting the finite medium behind us — with every passing day, continuing to manifest closer to the unintended consequences of our intended actions.

From our supreme position in the food chain, we tower unchallenged over the hierarchy of biodiversity. The more we destroy the earth, the more the earth pushes back, attempting to recover and rebalance delicate systems and conditions, so indelicately disturbed. But we are a clever species and we will use our technology, in any way possible, to forever push back on the pushback.

We stand front and center, masters of the universe on a once pristine planet dying from our mastery.

There was a time when the current state of science and the constant state of religion believed the earth to be the center of the universe around which all the celestial bodies in the heavens revolved. Galileo built upon the concepts of Copernicus and with his invention of the telescope and his never-before-seen views of the heavens, he publicly proclaimed that the earth and the heavens revolved around the sun. He would pay a price for speaking such truth to power. The Catholic church and the tribunal of the Inquisition would consider such declarations to be the very definition of blasphemy. Galileo was convicted of heresy and condemned as a heretic. One of the greatest scientific minds of all time was reduced to a pariah, confined to a life of solitude in various states of perpetual incarceration.

As mankind emerged from primeval jungles, forests, and deserts, his evolutionary consciousness became anthropocentric. Around it the reality of his perceived existence revolved.

He forgot that he was a guest on this planet. He came to believe that mankind was the center of existence around which all earthly affairs revolved. Like Ptolomy and the church, he disavowed the homeostatic systems providing the Goldilocks conditions around which he, mankind, and all living things revolved and were totally dependent on for their survival.

Who speaks truth to power now, as Galileo spoke to it then — of inverted belief systems and backward priorities? The Native Americans understood the symbiotic relationship between man and nature. The New World settlers, who became the New World Order, only understood social privilege and entitlement to take dominion over the earth — and in their determined perpetuation, have been destroying it in the process, ever since.

We have taken the dictates of the ancient orthodoxies seriously… and serious apocalyptic dominion has taken hold of the earth.

For the attainment of our immediate wants, we demonstrate our special brand of cleverness to limitlessly exploit limited resources. In the management of our sustained needs, however, we demonstrate a total lack of wisdom and a pathological level of denial and avoidance for the deadly repercussions of our unlimited demands.

The planet needs a respite and for us to stand down from our insatiable compulsions. We must come to terms with the inescapable laws of the human condition, whereby enough is never enough to satisfy human want.

We do these things and behave these ways, in compliance with a paradoxical need to do so, without requisite rationality for justification. To end WW2, we dropped the ultimate weapon of mass destruction on civilian cities. To end the world as we know it, we drop the ultimate weapon of mass dominion on diversified, self-sustaining ecosystems, no longer able to fully self-sustain and no longer diverse …because we could, because we can, but not because we should.

With such reckless abandon and misguided objectives, how will we ever manage our insatiable proclivities? How will we ever transcend the systemic obsolescence of our social, cultural, and religious institutions and contain our egocentric desire for dominance?

Will we ever come to take responsibility for the climate change we have wrought?

Will we ever take responsibility for the burning forests and the melting ice caps — for the dying oceans and catastrophic weather — for the mass migrations and traumatic displacements — for the contemptuous lifestyles supporting our disproportionate presence?

The transgressions against nature that defined mankind’s ascent will ultimately define his descent.

We cannot continue to increase the cause and expect it to somehow lessen the effect.

If we continue to stuff 10 pounds of humanity into a 5-pound sack of planetary hospitality, we will surely wear out our welcome…if we haven’t already (jz)