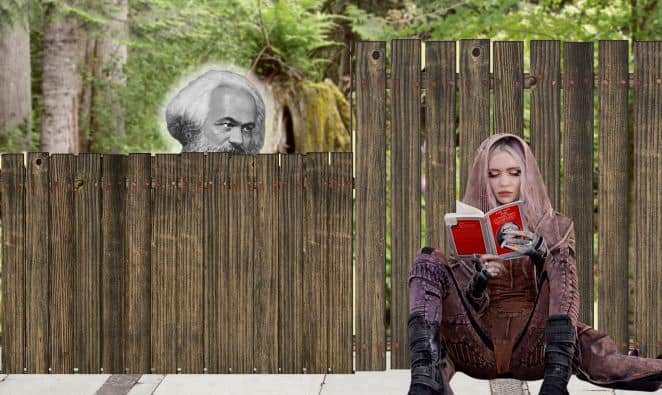 This fall, celebrity power couple Elon Musk of apartheid emerald mine fame and musician/artist/performer Grimes (Claire Elise Boucher) broke up after a three-year relationship. The couple first made waves in pop culture circles when they attended the Met Gala together in 2018. They again made headlines when their child was named X Æ A-12, the pronunciation of which the couple could not agree on. This name was inspired in part by the A-12 spy plane, manufactured by Lockheed-Martin. After the announced split of Elon and Grimes, there was much speculation as to the reason for their split. The highly conservative rag The New York Post published an article entitled Grimes seen reading Karl Marx following split with world’s richest man Elon Musk after Grimes was seen in public with a copy of the Communist Manifesto. This prompted her response on social media:

The Communist Manifesto has been in the news lately because of Grimes’ trolling of the paparazzi. While this is a disappointing reason for it being newsworthy, it is an opportunity to explain why the Communist Manifesto is one of the most important pieces ever published. Grimes is right that there are some very smart ideas in it, but she is wrong about crypto and UBI. These are distractions; she should have stuck with the manifesto.

The Communist Manifesto itself is a short text put together by Karl Marx and Friedrich Engels for the Communist League and published in 1848. Over 150 years later, it remains relevant. In the Communist Manifesto, Marx introduced the idea of historical materialism – that history is determined primarily based on the economic conditions of the society of the time. As Engels wrote in a letter to Borgius in 1894:

What we understand by the economic conditions, which we regard as the determining basis of the history of society, are the methods by which human beings in a given society produce their means of subsistence and exchange the products among themselves (in so far as division of labour exists). Thus the entire technique of production and transport is here included. According to our conception this technique also determines the method of exchange and, further, the division of products, and with it, after the dissolution of tribal society, the division into classes also and hence the relations of lordship and servitude and with them the state, politics, law, etc. Under economic conditions are further included the geographical basis on which they operate and those remnants of earlier stages of economic development which have actually been transmitted and have survived – often only through tradition or the force of inertia; also of course the external milieu which surrounds this form of society.

While I recommend reading it in its entirety, the best summary of the Communist Manifesto is found in the preface to the 1888 English edition, written by Engels:

That in every historical epoch, the prevailing mode of economic production and exchange, and the social organization necessarily following from it, form the basis upon which is built up, and from which alone can be explained the political and intellectual history of that epoch; that consequently the whole history of mankind (since the dissolution of primitive tribal society, holding land in common ownership) has been a history of class struggles, contests between exploiting and exploited, ruling and oppressed classes; That the history of these class struggles forms a series of evolutions in which, nowadays, a stage has been reached where the exploited and oppressed class — the proletariat — cannot attain its emancipation from the sway of the exploiting and ruling class — the bourgeoisie — without, at the same time, and once and for all, emancipating society at large from all exploitation, oppression, class distinction, and class struggles.

This is the goal of every communist – emancipation of society from all exploitation, oppression, class distinction, and class struggles. This is a noble goal and one that is worth fighting for.

It is important to remember that the Manifesto was written in a different time than today. As Marx and Engels explained in their joint preface to the 1872 German edition:

The practical application of the principles will depend, as the Manifesto itself states, everywhere and at all times, on the historical conditions for the time being existing, and, for that reason, no special stress is laid on the revolutionary measures proposed at the end of Section II. That passage would, in many respects, be very differently worded today.

The Communist Manifesto is accurate in its description of the class struggle and the historical development of the capitalist system, but it is not a blueprint for today as the material conditions have changed considerably.

One of the greatest lessons to be learned from the manifesto is that capitalism is an international and global phenomenon. Therefore, it follows that the revolution that overthrows capitalism will have to be international as well. As Engels and Marx wrote:

The need of a constantly expanding market for its products chases the bourgeoisie over the entire surface of the globe. It must nestle everywhere, settle everywhere, establish connexions everywhere.

This is easy to see today through the example of the transnational corporate class. Capitalism knows no borders; it has spread throughout the globe. Nowhere is immune from its ravages and brutal exploitation. Only through class struggle can we free ourselves from this scourge. And only the working class, the proletariat, are capable of securing victory over the ownership class, the bourgeoisie. As Engels and Marx explain:

The immediate aim of the Communists is the same as that of all other proletarian parties: formation of the proletariat into a class, overthrow of the bourgeois supremacy, conquest of political power by the proletariat.

This is the goal of a communist. There is nothing sinister in this goal, it is only right that those who labor should be emancipated from their chains.

While Bernie might not consider himself to be a communist, he was fighting for the same ideals as those stated in the Communist Manifesto. Class war is not a difficult concept to grasp. It is time for the working class of all countries to unite and win that war. Climate change, the pandemic, the cycle of boom and bust, and endless wars are clear evidence that the capitalist system is unsustainable. But unless the working class does something about it, the nature of the system will continue on this path leading to a return to the dark ages. The capitalist will pursue profit at any cost, even if it means a total collapse of society. Only revolution can save us from this fate. As Marx and Engels concluded in 1848:

The Communists disdain to conceal their views and aims. They openly declare that their ends can be attained only by the forcible overthrow of all existing social conditions. Let the ruling classes tremble at a Communistic revolution. The proletarians have nothing to lose but their chains. They have a world to win.

Working People of All Countries, Unite!