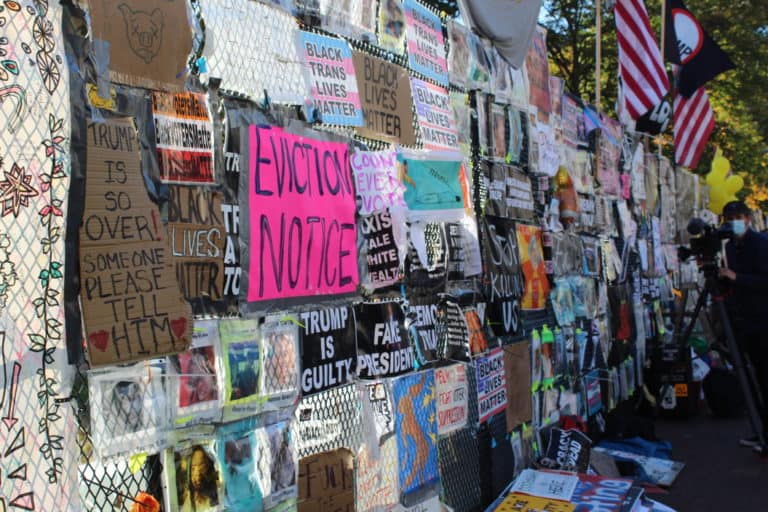 A Marxist Solution to the Eviction Crisis

As long as the capitalist mode of production continues to exist, it is folly to hope for an isolated solution of the housing question or of any other social question affecting the fate of the workers. The solution lies in the abolition of the capitalist mode of production and the appropriation of all the means of life and labor by the working class itself.

The United States is facing an eviction crisis of unprecedented proportions. According to US Census Data, 35.3% of the United States is under threat of eviction or foreclosure. This means over a third of the population is not current on their rent or mortgage payments and eviction or foreclosure in the next two months is likely. The CDC ordered a moratorium on evictions in September which is set to expire on December 31. This temporary halt only covered evictions for nonpayment and therefore many evictions are still occurring. Carrying out evictions during the pandemic has been “associated with increased COVID-19 incidence and mortality, supporting the public health rationale for use of eviction moratoriums to prevent the spread of COVID-19.” The lack of action on the part of the Federal Government regarding the eviction crisis is putting millions of lives at risk.

The heartlessness of the actions of those carrying out evictions in the middle of winter in a pandemic cannot be understated. A company named Civvl is now hiring people as eviction crew and advertising themselves as the “Fastest Growing Money Making Gig Due to Covid-19.” Their pitch for landlords starts out, “Evicting tenants from your rental property is not something we like doing but if compelled by circumstances, we have no choice but to carry out the eviction.” This is the utmost cruelty – hiring working-class people to evict tenants from their homes and make a profit from it.

This eviction crisis is a part of a larger crisis – a crisis of capitalism. The capitalist system is designed around inequality. As Marx explained in Capital, Vol. 1:

“But all methods for the production of surplus-value are at the same time methods of accumulation; and every extension of accumulation becomes again a means for the development of those methods. It follows therefore that in proportion as capital accumulates, the lot of the labourer, be his payment high or low, must grow worse.  The law, finally, that always equilibrates the relative surplus population, or industrial reserve army, to the extent and energy of accumulation, this law rivets the labourer to capital more firmly than the wedges of Vulcan did Prometheus to the rock. It establishes an accumulation of misery, corresponding with accumulation of capital. Accumulation of wealth at one pole is, therefore, at the same time accumulation of misery, agony of toil slavery, ignorance, brutality, mental degradation, at the opposite pole, i.e., on the side of the class that produces its own product in the form of capital.”

During the 1870s, Germany faced a housing shortage due to an influx of workers into urban industrial centers. Friedrich Engels addressed this shortage in a series of articles entitled “The Housing Question.” Although the circumstances around the modern-day US eviction crisis are different, the way in which Engels answered this question remains relevant.

Engels addresses the fact that poor living conditions are conducive to epidemics, as he writes, “Modern natural science has proved that the so-called “poor districts” in which the workers are crowded together are the breeding places of all those epidemics which from time to time afflict our towns.” The pandemic has highlighted this as it has had a greater impact on the working-class than the ruling class. The only billionaire being evicted is Donald Trump from the White House – while millions of working-class citizens are facing eviction. The distribution of the vaccine going to oligarchs like Nancy Pelosi and Mitch McConnell before much of the population highlights the imbalance between classes. According to Dr. Krishna Udayakumar, “something like 90% of all the vaccine doses that have been purchased have actually been done directly by countries, mostly middle-income and high-income countries, as opposed to low-income countries.” Capitalism is a global system and these inequities are seen on a global scale. The richest people and countries receive the vaccine first while the poorest are left to die.

There have been some attempts to address this crisis. For instance, Representative Ilhan Omar introduced the Homes for All Act in 2019. This bill would create new public housing in sufficient numbers to end homelessness. However, it only has six cosponsors and will never see the light of day in a corporate controlled congress. Even if it were to pass, it only addresses the symptom of homelessness, and not the problem of a social order which allows for homelessness. The same is true of the latest COVID-19 relief bill which would extend the moratorium on evictions and offer limited rental assistance.  These bills do not go far enough, as Engels explains, “It is the essence of bourgeois socialism to want to maintain the basis of all the evils of present-day society and at the same time to want to abolish the evils themselves.”

It is not enough to simply build more housing, offer rental assistance, or to further suspend evictions – the fundamental failures of capitalism must be addressed. As Engels outlines, the reason for the housing shortage is…

“…that it is a necessary product of the bourgeois social order; that it cannot fail to be present in a society in which the great masses of the workers are exclusively dependent upon wages, that is to say, on the sum of foodstuffs necessary for their existence and for the propagation of their kind; in which improvements of the existing machinery continually throw masses of workers out of employment; in which violent and regularly recurring industrial vacillations determine on the one hand the existence of a large reserve army of unemployed workers, and on the other hand drive large masses of the workers temporarily unemployed onto the streets; in which the workers are crowded together in masses in the big towns, at a quicker rate than dwellings come into existence for them under existing conditions; in which, therefore, there must always be tenants even for the most infamous pigsties; and in which finally the house owner in his capacity as capitalist has not only the right, but, in view of the competition, to a certain extent also the duty of ruthlessly making as much out of his property in house rent as he possibly can. In such a society the housing shortage is no accident; it is a necessary institution and it can be abolished together with all its effects on health, etc., only if the whole social order from which it springs is fundamentally refashioned.”

The eviction crisis is not an accident – it is a product of the capitalist system.  To expect the government to produce an actual solution would be pure folly. In the words of Engels, “It is perfectly clear that the existing state is neither able nor willing to do anything to remedy the housing difficulty.  The state is nothing but the organized collective power of the possessing classes, the landowners and the capitalists as against the exploited classes, the peasants and the workers.” It will be up to the people to fight for housing justice. There have already been some examples of this fight throughout the United States. In the Bronx, 14 tenants carried out a rent strike in a 30 unit building. This was just one small action of many rent strikes and calls to cancel rent. In Portland, Oregon, protesters occupied the streets around the Red House at 4406 North Mississippi Street to block the eviction of the Kinney family who lost the house to foreclosure. The future of the Kinney family and the Red House remains to be determined, but the heroic stand of the people in their defense should be an inspiration as more people face eviction. Rent strikes and eviction defenses must become the norm across the country as the capitalist class carries out their agenda of mass evictions. The government could easily provide housing for all if it so desires through both a jobs and a homes guarantee. Modern Monetary Theory tells us this– but the oligarchs refuse to provide these essential programs.  This is because the government represents the interests of the capitalists, as was the case in Germany 150 years ago when Engels wrote, “Capital does not desire to abolish the housing shortage even if it could; this has now been completely established.”

There is no shortage of available housing in the United States. As Engels notes, “But one thing is certain: there are already in existence sufficient buildings for dwellings in the big towns to remedy immediately any real ‘housing shortage,’ given rational utilization of them. This can naturally only take place by the expropriation of the present owners and by quartering in their houses the homeless or those workers excessively overcrowded in their former houses.” In 2019, there were 59 vacant properties for each homeless person in the US. The increased number of evictions brought on by the coronavirus pandemic is only increasing this disparity. It is a cruel and heartless system that allows people to remain homeless when housing is available. It is an even worse system that kicks people out into the cold in the middle of a global pandemic. Yet this is what the ruling class of the United States is doing. The expropriation of empty housing might seem radical to some, but it is far more compassionate than allowing people to die of exposure due to homelessness.  Anarcho-communist Petr Kropotkin said it best in his blueprint for revolution, The Conquest of Bread, “On the day that the expropriation of houses takes place, on that day, the exploited workers will have realized that the new times have come, that Labour will no longer have to bear the yoke of the rich and powerful, that Equality has been openly proclaimed, that this Revolution is a real fact, and not a theatrical make-believe, like so many others preceding it.”

The only solution to the eviction crisis remains the same solution  Engels gave us. “In order to make an end of this housing shortage there is only one means: to abolish altogether the exploitation and oppression of the working class by the ruling class.” There are no true solutions within the capitalist system. The only solution must come through a change in the system that brings the means of production under control of the working class. Engels gives us hope for a better future when he says,

“The possibility of securing for every member of society, by means of socialized production, an existence not only fully sufficient materially, and becoming day-by-day more full, but an existence guaranteeing to all the free development and exercise of their physical and mental faculties — this possibility is now, for the first time, here, but it is here.”

It is up to us to make this future a reality.