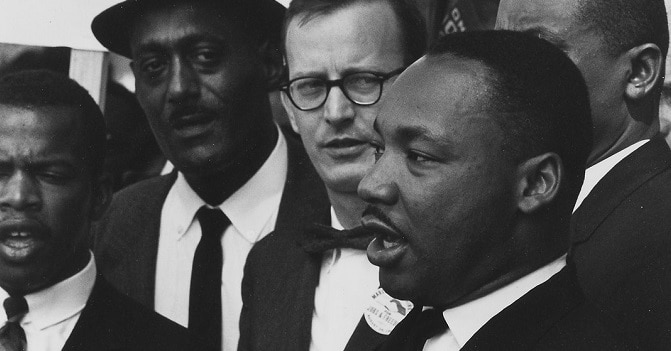 Today we celebrate Martin Luther King Jr. Day. Yet the true history of MLK Jr. will not be mentioned by the mainstream media. Much like other great socialists of the past like Albert Einstein and Hellen Keller, the bourgeoisie have turned King into a hero by creating an inaccurate version of him that leaves out his revolutionary anti-capitalist beliefs. Today’s celebrations of King will be mainly focused on Civil Rights and Voting Rights. In high school, we learned about the “I Have A Dream” speech, but not about “Beyond Vietnam” or “The Three Evils.” It is not mentioned in AP History textbooks that he was a socialist and anti-capitalist. And it is certainly not well known that King read Marx and drew much from his work.

In 1951, during a course on the Christian and Society, King made the following notes on capitalism:

It is a well known fact that no social institut [sic] can survive when it has outlived its usefullness. [sic] This, capitalism has done. It has failed to meet the needs of the masses.

He would expand on this statement in a letter to Coretta Scott in 1952:

I imagine you already know that I am much more socialistic in my economic theory than capitalistic. And yet I am not so opposed to capitalism that I have failed to see its relative merits. It started out with a noble and high motive, viz, to block the trade monopolies of nobles, but like most human system it fail victim to the very thing it was revolting against. So today capitalism has outlived its usefulness. It has brought about a system that takes necessities from the masses to give luxuries to the classes. So I think Bellamy is right in seeing the gradual decline of capitalism.

Rarely has a book created such a profound impression on the popular mind. For years there has been agitation of the social question in other countries, especially in Germany and France, where a mighty international socialist movement was developing at a rate to arouse apprehension among the ruling class. Looking Backward was the first popular exposition of socialism in this country. Thousands read it with keen delight without being aware that it undermined the existing social order and paved the way for the social commonwealth.

It is a fascinating to think that in his letter to Coretta Scott, King was echoing the words of Debs. And he did not stop there, in his 1958 essay “My Pilgrimage to Nonviolence,” King describes the influence that Marx and other philosophers had on his thought.

During the Christmas holidays of 1949 I decided to spend my spare time reading Karl Marx to try to understand the appeal of communism for many people. For the first time I carefully scrutinized Das Kapital and The Communist Manifesto. I also read some interpretive works on the thinking of Marx and Lenin. In reading such Communist writings I drew certain conclusions that have remained with me to this day.

MLK Jr., My Pilgrimage to Nonviolence

These conclusions are summed up in the following:

In short, I read Marx as I read all of the influential historical thinkers-from a dialectical point of view, combining a partial “yes” and a partial “no.” In so far as Marx posited a metaphysical materialism, an ethical relativism, and a strangulating totalitarianism, I responded with an unambiguous “no”; but in so far as he pointed to weaknesses of traditional capitalism, contributed to the growth of a definite self-consciousness in the masses, and challenged the social conscience of the Christian churches, I responded with a definite “yes.”

MLK Jr., My Pilgrimage to Nonviolence

While King had his disagreements with Marx, he would go on to base his battle for economic and racial justice on the class struggle espoused by Marxists. Indeed, by 1968, according to biographer David R. Garrow, King was telling his friends in private that “economically speaking he considered himself what he termed a Marxist, largely because he believed with increasing strength that American society needed a radical redistribution of wealth and economic power to achieve even a rough form of social justice.” During one of his many stays in jail, speaking to his cell mate Ralph Fager, King said:

If we are going to achieve real equality, the United States will have to adopt a modified form of socialism.

This was a common theme for King throughout his short life. King was a revolutionary, he was not a simple reformist. He believed in ending the capitalist system which creates inequality and poverty. He explained these feelings in a speech at a Southern Christian Leadership Conference (SCLC) in 1967:

Now, when we see that there must be a radical redistribution of economic and political power, then we see that for the last twelve years we have been in a reform movement. We were seeking to reform certain conditions in the house of our nation because the nation wasn’t living up to the very rules of the house that it has prescribed in the Constitution. Then after Selma and the Voting Rights Bill, we moved into a new era, which must be an era of revolution. I think we must see the great distinction between a reform movement and a revolutionary movement. Now we are called upon to raise some questions about the house itself. Now we are in a situation where we must ask the house to change its rules, because the rules themselves don’t go far enough. In short, we have moved into an era where we are called upon to raise certain basic questions about the whole society. We are still called upon to give aid to the beggar who finds himself in misery and agony on life’s highway. But one day, we must ask the question of whether an edifice which produces beggars must not be restructured and refurbished. That is where we are now. Now this means a revolution of values and other things.

While King was not a communist and in a manner typical of the Cold War era actually spoke out against communism, his anti-war stance was enough for the FBI to declare that he was under communist influence. This declaration was made following his “Beyond Vietnam: A Time to Break the Silence” speech. In this speech, King criticized the imperialism and colonialism of the capitalist west:

A true revolution of values will soon look uneasily on the glaring contrast of poverty and wealth. With righteous indignation, it will look across the seas and see individual capitalists of the West investing huge sums of money in Asia, Africa, and South America, only to take the profits out with no concern for the social betterment of the countries, and say, “This is not just.” It will look at our alliance with the landed gentry of South America and say, “This is not just.” The Western arrogance of feeling that it has everything to teach others and nothing to learn from them is not just.

This criticism of the capitalist system was enough for the FBI to consider him a danger to the state. Although a staunch advocate of non-violence, King was no fool and traveled armed and with bodyguards. This was not enough to keep him from being assassinated. On this MLK Jr. day, we should remember that his legacy was a revolutionary fight for socialism – a fight for equality for all. If we are to truly commemorate his legacy, we must follow in his foot steps and unite the working class to overthrow the capitalist system.

Originally published on Birrion Sondahl’s substack, An Appeal to Reason.

1 thought on “MLK Jr. was anti-capitalist”