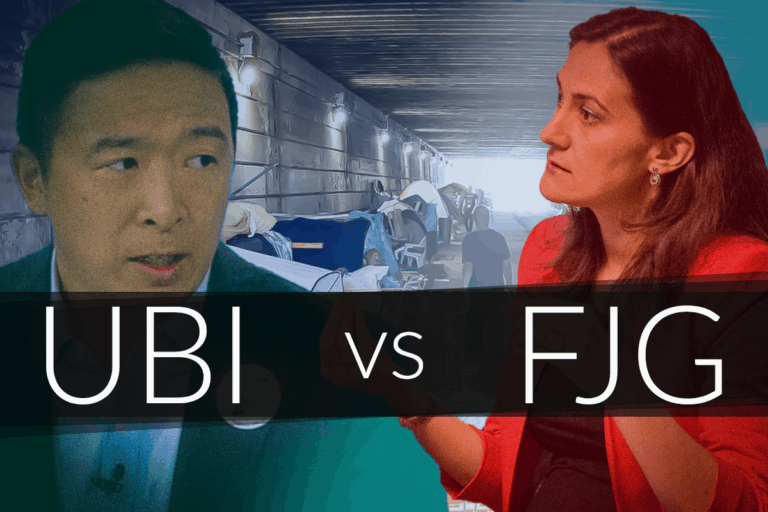 All of them appear to mean well, but only Grumbine has taken the time to learn the necessary macroeconomics, has thought these policies through, and is qualified to speak about either of them.

The road to hell is paved with good intentions.

Imagine two futures. In the Universal Basic Income (UBI) future when there are too few jobs to go around, we create an employed class of people and an unemployed class. The employed will live in constant fear, essential for their subjugation, of being cast down onto the UBI. As automation and other technologies are reducing the demand for labor within the private sphere, we need to imagine a world where everyone has a job, and everyone only has to work part-time, not a world where only a section of the populace works full time, and the reserve army of labor grows larger every year. UBI provides an easy thermostat for the ruling class – where our corrupt governments giving us a little more money lowers the dial of discontent and desperation, and where monopolists setting prices can always turn it back up.

Now imagine a future where instead of providing universal income to be vacuumed up by our abusers, we provide universal services to all people and leave no one unemployed. We are presently in multiple global crises, of course, but we need to envision a near future where people working for the public purpose have solved society’s ills, and no longer need to work as many hours.

The Federal Job Guarantee (FJG) is not designed as busy work. Communities could use it to prop up their nonprofits and undertake other civil works, to plant trees, grow food, provide public art, read to the elderly, to share our many unique skills and save the world. The compensation as well as the designated number of hours per month could be attached to the cost of living and the labor underutilization rate, providing a balance of public and private sector labor needs.

UBI advocates are mired in the mistaken belief that working class people cannot afford essentials due to a shortage of money. Ergo, give them money. The real reason people cannot afford them is because of the artificial scarcity created by monopolist price setting. The things we need are already there. The profiteers will never lower the prices beneath the points of profit maximization, even if it costs many lives. What on earth makes a UBI supporter think more money in this already dystopian power structure would not quickly result in new prices, rather than the desired adequate quantity made available? There are already enough homes for the homeless, enough food for the world’s hungry, enough hands for another New Deal. UBI does not provide homes, nor food, nor progress. It provides for the very class of people that already own and restrict those things. It is designed to maintain existing power structures in the face of enormous technological progress, not to challenge them, not to reform them, and certainly not to save us.

In celebrating UBI’s widening acceptance, Leung and the hosts are missing the reason UBI is popular not just with misinformed progressives, but also with libertarians, authoritarians, billionaires, and Milton Friedman fans. That is, to quote George Carlin:

“Bipartisan usually means that a larger-than-usual deception is being carried out.”

There is a formula from mainstream economics, and like much of the field it is a misleadingly simplified way of describing a very complex world, but it is nevertheless useful (everyone needs to read this). It says the supply of money (M) multiplied by the number of times it is exchanged, called velocity (V), naturally seeks an equilibrium with current prices (P) multiplied by total available goods and services (y), giving MV=Py. Ultimately, working people don’t need more money, they need the many things money can buy, represented in this formula by the letter “y.”

UBI advocates are talking about increasing M if they want new government spending or increasing V if they want that spending offset with new taxes (because money has higher velocity when passing repeatedly through working people’s hands than it does when sitting with the wealthy), so that the left side of the equation is larger and the right side must follow. With Py intentionally trailing after MV, in anywhere except an imaginary laissez-faire libertarian world that never has and never could exist, we can expect an increase in P (price) to coincide with (or continue outpacing if current oligarchy remains intact), our gains in y (which is, again, the stuff we actually want). The whole idea behind real-world capitalism is controlling the availability of y, keeping it artificially low, so that the equation balances by P being too high. That is where profit is extracted. Former presidential candidate Andrew Yang and other advocates will often say they want to leave the existing social security nets intact, but underneath (as was plainly spelled out on Yang’s campaign website) there is always, in one wording or another, a desire to keep the rise in MV down by eliminating spending on existing government programs that would supposedly (but not really) be made redundant. So, not only are they not talking about increasing y, the goal, but they are actually talking about potentially reducing it through a deliberate further privatization of the Py side of the equation! UBI advocates’ allegedly benevolent aspirations will only deliver poor outcomes.

If we want to use the federal government’s spending power to improve the conditions of the working class, the way to do it is through y directly. Use the power of our currency to maintain full employment, to redefine public work, to directly increase the available goods and services. The government can increase y by directly spending on improving education, data access, nutrition, art, healthcare, housing, transportation, etc., and by providing a federally funded but locally administered guaranteed job for anyone that wants one. Empowered communities, robust infrastructure, and environmental sustainability are key to the same qualities in our economy. Increasing y as the vehicle for MV, instead of the other way around, is a far safer plan economically and a better plan for future equality. A Federal Job Guarantee is real progress. A UBI advances our deterioration.