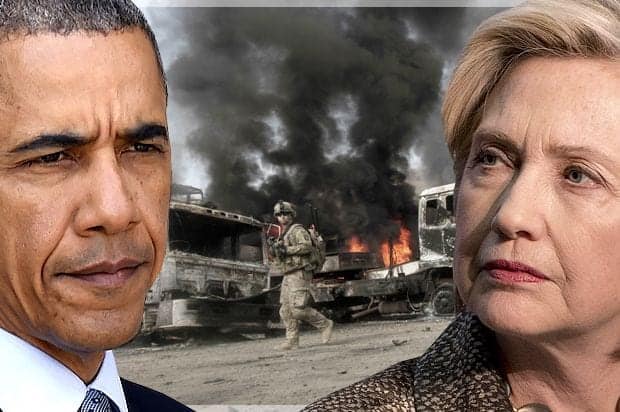 Obama, Clinton And A Permanent State of War

One of the many elephants in the room, that the majority of Americans seem to be ignoring, is the constant state of war we have been in since the beginning of this century. Afghanistan, Iraq, Lebanon, Syria are all under siege by American firepower, whether it be drones, fighter planes or other forms of combat. Most of the targets of this constant barrage of terror are innocent civilians. Begun by Bush but continued under the neoliberal policies of Obama, the baton will be passed to Clinton, who never met a war she didn’t like.

Americans are not shown the resulting horror of these endless wars. We try to get the photos and videos out over social media, but our reach is not as far as the mainstream media’s. Sadly, they are focused on Trump, 24/7, instead of informing the populace about the other candidate: Hillary Clinton’s beyond-hawkish position on war, and abysmal history in regard to Middle East policy.

Even as alienated American combat soldiers come back, suffering from post-traumatic stress from the war without end, and murder our policemen, we ignore the connections between the chaos we promote abroad and the blowback we experience here at home.

We are always the victim.

And now President Obama, the Nobel Peace Prize winner, is ready to hand the baton in our war fighting marathon to his successor, having come full circle himself, adding boots on the ground in both Iraq, Afghanistan, and in Syria.

It seems nobody, not even Congress, wants to weigh in on the permanent state of war we are in. American coverage has shrunk to spot news, which chronicles one horrific act after another in under 45 seconds. Incredibly, any decent-sized American tornado will get more coverage.

Yet, even without our attention, the war drones on and the human misery continues to mount. What do you think kids feel in these conflict zones when they are out somewhere collecting wood or water, always keeping one eye skyward, waiting for the incoming missile from an American drone?

We just don’t get how our accidentally killing civilians with drones might radicalize the surviving family — and tribe.