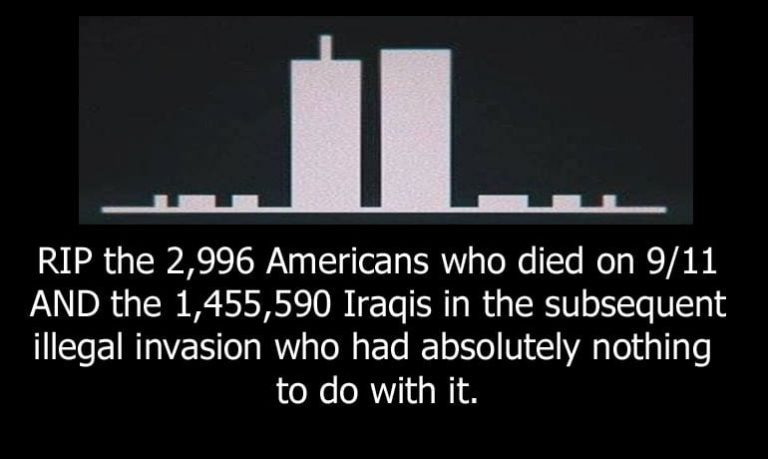 On 9/11 as an Anniversary of Consequence: Where do We Go From Here?

On this day, the anniversary of 9/11, when we find ourselves in the midst of a presidential election where the choices of Republican and Democratic party are beyond abhorrent, we have no choice but to face the evil inherent in our history and in our imperialistic foreign policy that breeds death in our names. I am oft fond of asking the philosophical question on this occasion: “what responsibilities do the individual citizens of a democracy bear for the actions of their own government?” For today is perhaps the most poignant day to breach that issue. Today is the anniversary of, in the words of Malcom X on the assassination of John F. Kennedy that was remarked for this very occasion by Ward Churchill, our “chickens coming home to roost.’ If we are to move forward toward an equitable and truly just model of democracy, if we are to truly find peace, we must fully come to terms with the evil inherent in American culture that is visited both upon Americans at home through systemic racism and upon those without the privilege of being born or naturalized Americans abroad.
I remember vividly that morning in 2001. My then-wife was pregnant with my first son and experiencing heavy morning sickness, so I was teaching her lab classes at the University of Memphis. I awoke early, fixed breakfast, and sat down to turn on the television just as the second plane hit the tower. Of course I realized that this was a day that would change everything; unfortunately I believed that those changes would tend in a completely opposite direction. I had hoped that we would see the evil of our ways and the ways that it drove desperate people to commit horrible acts to draw attention to the vastly eviler actions perpetuated on a regular basis by our own government and those abetted by the very evil dictators and despots we maintain in power to enable the pursuit of “American interests” abroad. For about an hour, I actually thought that we would have no option but to stare ourselves in the mirror and see the effect our policies had on the rest of the world. That thought died hard when I wandered out of my house and onto a campus of people to whom this was, literally, just another day.

Perhaps the facts were still unknown to some (undoubtedly some still are to many, but not of the overtly conspiratorially believed type), perhaps it was a matter of shock, but what I saw at that morning class I taught was not introspection but rather another boring day of class. That afternoon as I drove around, the local radio stations had preempted normal broadcasts to begin the deluge of patriotic propaganda, and the reality began to sink in. There would be no serious consideration that this was a reaction to the death we had spread abroad, but rather an instant declaration that we were the victims of some grand plot of evil people abroad. As hard as it was to laugh at “they hate us for our freedoms” , that is the level of denial that is still to this day 15 years later so common in American society.

Most people had never heard of the labor rights activists in Colombia shot by security guards of Coca-Cola because they wanted enough money for their labor to pay their bills and take care of their families. Virtually nobody was speaking about the half million Iraqi children who died by the most painful and horrible of possible means due to our war crimes in the first gulf war and the subsequent sanctions that prevented them from providing clean drinking water to their people. The nonchalant defense of that act of genocide came and went in a 30 second clip on TV, and was never heard from again. Nobody even thought of the fact that the first Gulf War never really ended, that under Bill Clinton we continued to bomb Iraq on a regular basis throughout the 1990s, wreaking death and destruction to literally kill them into ‘democracy.’ The amount of carnage on 9/11 wasn’t the most exceptional part, only that for this one occurrence it visited itself on home soil and on our own rather than some ‘inferior’ nationalities.

Now, when we are presented the false dichotomy of an inveterate warmonger and the orange-faced buffoon of a demagogue, we must rise up together and take the solemn responsibility that is inherent upon us as the voting population of the most powerful nation on the face of the planet. We must realize that our decision here this November will literally be life or death for peoples who have committed no other sin but to be born in Gaza, Syria, or any of a handful of other countries who find themselves upon resources or routes of trade deemed invaluable by the economic insanity known to us as capitalism.

Regardless of the electoral college, regardless of the constitutional limitations of our election system, the voice of the people still alone determines who is elected. Jill Stein is a far saner decision than either major party, both of who would be more than glad to escalate American imperialism abroad and breed even more of those proverbial chickens… inviting them to come home again to roost in far greater numbers in the future. All those harping about Stein’s lack of experience should instead think of the fact that she at least recognizes the sovereign dignity of humanity, and that those not born Americans deserve the right to life, liberty, and prosperity as much as any American.

We who are the ‘beneficiaries’ of 800 military bases abroad, more than an order of magnitude greater than the rest of the planet combined, must realize exactly why we have those bases and whose purposes they serve (hint: it’s not the 99%). There is no American liberty to defend in Burkina Faso, Djibouti, or Moldova. No American freedoms to protect in Somalia, Cyprus, or Bahrain. There is only the desire to project American power, and to impose the will of the Lords of Industry upon pliant governments to preserve the profit margins of international capital, or to impose regime change upon those who refuse to dance to the tune we choose to call. It’s no surprise that many of our allies are dictatorships or monarchies, those are the forms of government that don’t rely upon the ‘unwashed masses’ to enforce and enact laws. Can you seriously believe that a government that has no respect for democracy abroad actually cares about it here at home?

This election has ramifications far beyond the American Supreme Court, and the American economy. This election will determine whether we continue to rain death down abroad, upon people who only desire self-determination, a roof over their heads, and the ability to worship the god of their own belief. As an atheist I may disagree with the necessity of that last part, but I will be the first to point out that those who believe in one are dwelling in a glass house, and should not throw stones at those living in another glass house of another faith. To those who insist that Islam is more violent than Christianity or Judaism, at least in recent memory, they should start to count the corpses of Hiroshima, Nagasaki, Vietnam and Gaza.

I am of the opinion that what our government does is completely our responsibility, and that we as its citizenry bear the ultimate responsibility of those actions. I cannot even pretend to be innocent knowing what I know, and as a result I am forced to attempt to awaken as many of my fellow Americans as possible and convert them to the cause of liberty for all of humanity rather than merely America. It is for that reason I refuse to accept the false dichotomy of political impotence proffered by the Democrats or Republicans. It is for that reason that I cannot morally cast a vote, even in self-defense, for the candidacy of someone who strives to earn the endorsement and affection of the evilest war criminals in human history. I must, like Mario Savio, cast myself against the gears of the machine.

The struggle to drag American government toward the actual embrace of human rights will be a generational one, but it is one that must begin here and now. We have no time to await some candidate that will run apart from the entrenched political establishment as an independent or third party who already garners sufficient support to win. That is a losing proposition intended to keep us voting for the criminal du jour. We who are already awakened must create that space within the electoral populace for the next candidate to walk into. We must stand up now and refuse to yield, for the consequences of the path we continue to tread are more 9/11 attacks, more unnecessary wars of aggression for international capital, more death and destruction abroad in a continuing maelstrom that feeds upon itself and the lives of countless innocents.

Don’t shirk your responsibilities. Never accept that you are impotent to change the system, because your vote is the only consent that matters. Once it is cast, they don’t really care about why you cast it, but only that you have given your endorsement for whatever actions they deem fit to use. Whatever happens, by your positive consent you bear responsibility. To quote the philosophy of Harlan Ellison, “..any action is better than no action, even if it’s the wrong action; that you never reach glory or self-fulfillment unless you’re willing to risk everything, dare anything, put yourself dead on the line every time; and that once one becomes strong or rich or potent or powerful it is the responsibility of the strong to help the weak become strong.”

I, for one, cannot and will not remain silent.