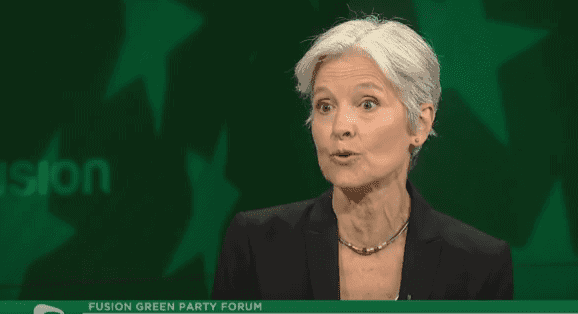 Stein And Baraka Make Their Case At Fusion Town Hall

Green Party Presidential candidate Jill Stein, and her running mate Ajamu Baraka, made a case for their third party run today in a town hall broadcast by Fusion Network. The network promoted the mid-day event using the hashtag #greenpartyforum.

Throughout the program, the pair of candidates discussed a wide range of subjects including police brutality, gun control, marijuana legalization and the continuing crisis in Syria.

Stein’s stance on Marijuana reflected the current conventional wisdom toward the issue, is a subject that has won an increasing amount of favor with voters, of which she remarked, “What I would do, if I were in the White House, would be to instruct the Drug Enforcement Agency, the DEA, to do a really radical thing…and that is, to actually use science in determining what substances will be scheduled and which aren’t. Because, if science is used, marijuana and hemp will come off of that schedule because they are less dangerous, we know that, than substances that are perfectly legal, namely alcohol and tobacco. So let’s use science. Let’s take marijuana and cannabis off that schedule. In fact, let’s treat drug problems like health problems and not as [a] criminal problem.”

Regarding the issue of gun control measures, Baraka related, “Well, I think we have to continue this conversation with the American people around this issue of gun control. It seems that the people are ready for some type of rational gun control legislation. The problem we have is the blockage we have from Republicans and even some Democrats. So, the solution has to be from the people themselves, putting pressure on these representatives who are in Congress who continue to block that kind of reform.”

You can watch the town hall via Fusion on Facebook HERE.