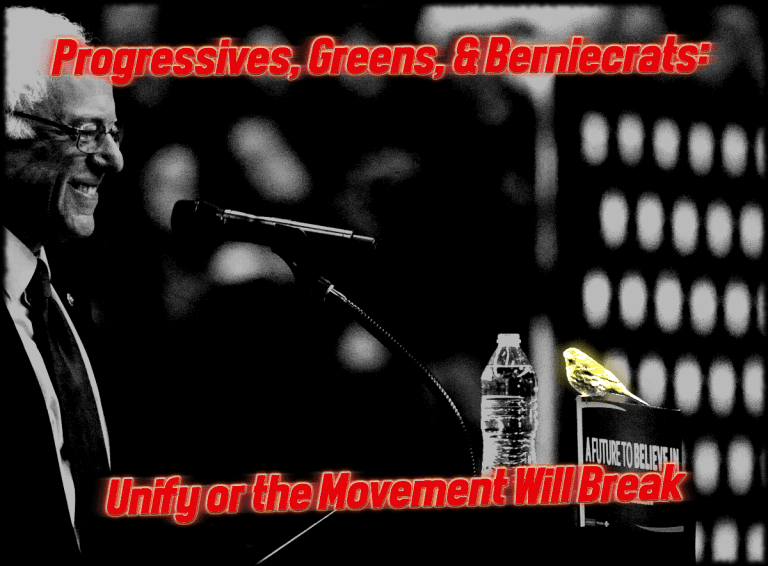 Progressives, Greens, & Berniecrats: Unify or the Movement Will Break

“In solidarity.” Since April, I’ve used that phrase to sign off on each of the 99 articles I’ve written about the 2016 elections. Now, as I write my 100th article on the subject, I know that it will end again with those same twelve letters — but who am I “in solidarity” with? As the tragic climax of this reality-TV “election” approaches, the answer to that question is less and less obvious. Where there once was unity, there is only division — Sanders’ political revolution brought tens of millions of us together but I can no longer pretend that it hasn’t fractured into a dozen impotent factions. If we are to continue in our revolt against plutocracy, we must understand the profound difference between a unified movement and a divided multitude — I assure you that our rulers understand the difference very well!Solidarity is the difference between regression & revolution…

The People Divided Will Always Be Defeated

Much more than a slogan or meaningless political rhetoric, the phrase “the people united will never be defeated” has another side to it — that is, a divided people will always be defeated. The rulers of feudal Europe knew this in the sixteenth century when the political scientist Nicolo Machiavelli wrote the words divide et impera, which means “divide and rule,” though variations of the phrase were attributed to Julius Caesar and even to the ancient Phillip II of Macedon.

All through human history, the ruling class has intentionally encouraged divisiveness between their subjects, whether through racism, religious sectarianism, cultural ideologies, or class/caste boundaries. This is neither speculation nor conspiracy theory — examples of the divide-&-rule doctrine can be found in every time and place, from ancient texts (like Sun Tzu’s Art of War) to the deliberate sabotage of activist groups during COINTELPRO to today’s Clinton campaign as revealed by the #PodestaEmails.

The 1% Wants Progressives and Third-Parties to be Divided

Podesta’s leaked emails reveal that democrats and the Clinton campaign, along with their propagandists at CNN, MSNBC, and the New York Times, discussed and implemented the use of racial dynamics, religious affiliation, and class differences to divide progressives — but that was only the beginning. The DNC didn’t want us to be unified during the primaries and they certainly don’t want us to be unified during the general election. And it seems their wish is coming true — our once-unified movement is breaking into factions.

The first split polarized the #NeverHillary and the “hold your nose and vote for her” progressives, intentionally fueled by democrats and their media with panic at the possibility of a Trump presidency. The dust of the convention had barely settled. Instead of acknowledging our different approaches and working toward the goals we still had in common — we were divided into two camps that were already screaming at each other.

After those bridges burned, enmity arose between the left and right-leaning Berners of the anti-Clinton camp — before long, those who leaned Green and those who leaned Libertarian were hurling insults between them. Once again: instead of uniting around the anti-corporate and anti-corruption positions that we shared, we lost sight of the fact that all of us are opposing the fake democracy and the destructive greed of the 1%.

And now the Greens and Sanders-write-ins are hurling stones, too — at this rate, all of us may as well start our own movements! We’re marginalizing each other and bickering about relatively minor issues while the wealthy are subverting democracy to profit from destroying our planet!

We’ve gone from being a unified movement of millions to being a dozen quarrelsome groups at the political fringe, each of whom appear to believe that their own approach is so much better than all the others that they’re banning people from Facebook groups, left and right! Tell me — who does that benefit, huh? The political revolution? The unprecedented coalition of voters who Bernie Sanders mobilized? Or does it benefit the corporatist democrats?

But perhaps the most important question of all is –: if we’re unable to listen to the points of views of others, how would we be any different than the hypocritical DNC who made a mockery of their own name by shutting our voices out of the democratic process?

We Must Hold Fast While the Two Parties Tear Themselves Apart

We may have lost the battle for this particular presidency because it was rigged from the start — but the ruling class knows that, if we sustain the momentum of our movement and set aside our differences, we can win the war against the plutocrats. Pardon my language, but both democrats and republicans are about to be in deep $#!t — and they know it! Whoever is elected, the next four years are likely to be a circus — the GOP is breaking into openly-racist pieces and the democrats will be doing damage-control for betraying their own voter base in the primaries. Public opinion is steadily turning against both of the state-backed parties and progressives need to build a viable coalition to replace them.

After this election, there will be two numbers — one number will be the number of votes for the two parties’ candidates and the other will be the number of anti-establishment votes. The larger the second number is, the better it will be for all of us. Forget whether people are Green, Libertarian, writing Bernie in, or even if they’re following Sanders & voting for Killary — if they would’ve rather voted for Bernie Sanders, then they’re on your team, silly!

Whether we are ultimately right or wrong about this or that issue is meaningless — if each one of us insists the rest of the country ought to act, protest, and vote the same ways they do, we will never accomplish anything.

We Must Become Peacemakers

Achieving unity is the most important thing we could do. The corporatists understand this and they are doing everything in their power to keep us fighting among ourselves. It doesn’t matter to them that nearly half of us are political independents — but they’ll be running for the hills when half of us are politically unified against them.

So, if you find yourself using harsh words or silencing people who once marched beside you, ask yourself who is benefiting from that enmity. Become a peacemaker, be kind, reach out to those who are making decisions that you disagree with and emphasize the goals that you still share! Believe me — history will not remember the varying shades of right and wrong that we, as individuals, were. History will remember whether we stood together in solidarity for the good of the planet and its people — or not.

Do not give in to the Dark Side. Reject the black-&-white, red-vs-blue, us-&-them paradigm — that’s what got our country in this whole mess to begin with, remember? And, even if we could win that way, what would we win? If we want to create a better world, the movement must rise above the divisiveness of party politics. Like the Sand-Man said: “When we stand together, there is nothing, nothing, nothing we cannot accomplish.” But on the other side of that coin is written: when we fight among ourselves, there is nothing, nothing, nothing that we won’t completely screw up…

For a more complete list of John’s articles (and other cool stuff),
******Click HERE to visit johnlaurits.com******

*If you enjoyed this article, please consider buying a coffee for John Laurits by clicking here HERE. Think of John as an endangered species — a completely independent artist and journalist who subsists primarily on small donations.