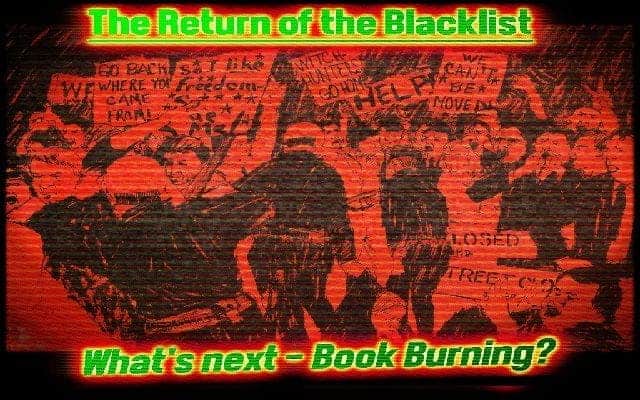 The Return of the Blacklist: What’s Next — Book Burning? 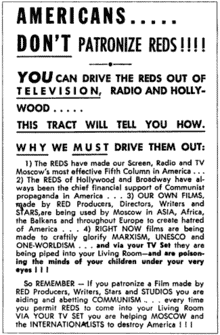 According to the dictionary that I hold in my hand, “blacklist” is a noun referring to “a list of persons under suspicion, disfavor, censure, etc.” or to lists of names forbidden to work in an industry “for holding opinions considered undesirable.”  The most notorious instance of blacklisting in the United States, of course, was the entertainment industry blacklist or the so-called “Hollywood blacklist.” This lasted several decades (more or less) which peaked in the 40s and ’50s and was meant to silence or ruin the careers of countless writers, artists, journalists, activists, and musicians who were members of the communist party, socialists, or merely accused of having Communist, Socialist, or Marxist sympathies. During the Red Scare, right-wing publications and even congressional committees created formal blacklists accusing newspapers, TV programs, radio broadcasts, and individuals of disseminating pro-Russian propaganda. At the same time, the bosses of large media companies and public officials held informal lists by private agreements about who held the wrong opinions… 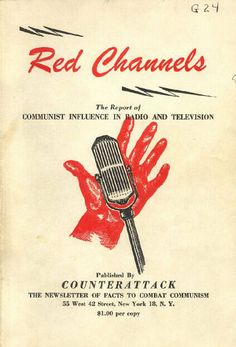 An important blacklist, called the Red Channels, was published in 1950 by the conservative newsletter Counterattack. The initial list of 151 entertainers, writers, and artists were claimed to be knowingly or unknowingly part of a communist effort to disseminate pro-Russian propaganda in the US through the media and entertainment industry. The authors of the blacklist also claimed the Russian propaganda used issues like “academic freedom, civil rights, [and] peace” (Red Channels, pg. 2-3) to convey its message — and, according to professor of history and McCarthy-era expert Ellen Schrecker:

“By 1951, the television networks and their sponsors no longer hired anyone whose name was in [Red Channel]” — from Schrecker’s Blacklists and Economic Sanctions

All in all, it is acknowledged that at least 10,000 entertainers, activists, and journalists lost the ability to work in their professions during the Hollywood blacklist, though Schrecker believes the real number is probably much higher. In light of these historical facts, you might think that our society would be eager to leave the repression of blacklisting behind — but, if you thought that, it is now my depressing duty to tell you that you’re wrong…

I’d love to tell you that “Your Friendly Neighborhood Propaganda Identification Service” is a satirical tagline that I made up to add a dash of charm and a sprig of humor to this article. Unfortunately for both of us, I can’t. This is because it’s the actual tagline of a new website called “PropOrNot,” which enjoyed a huge boost of publicity the other day when the dingbats at the Washington Post recklessly published a glowing review — (*ahem!*) eh, I meant “article” — about the fledgling thought-police organization. PropOrNot, of course, is merely another in a recent plague of online blacklists, which I’ve written about in the article, “Real or Fake News — Who Gets to Decide?” And now the mainstream media is giving them free publicity — here’s how the Washington Post introduces them:

“PropOrNot, a nonpartisan collection of researchers with foreign policy, military and technology backgrounds, planned to release its own findings Friday showing the startling reach and effectiveness of Russian propaganda….” 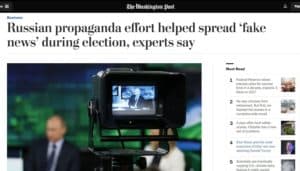 A “nonpartisan collection of researchers with foreign policy, military, and technology backgrounds” — sounds nice, doesn’t it? Ah! But I forgot to mention the fact that — as the real journalists, Ben Norton and Glen Greenwald, noted — PropOrNot keeps themselves anonymous. I even ran a ‘Whois’ search on InterNIC and found that their DNS registration info is hidden by a company called ‘Domains by Proxy LLC’ — which means they could literally be any person or group of people. Why, then, does the Post call them “experts?” In other words, the Washington Post has just elevated irony to a whole new level of “are-you-listening-to-yourself-right-now?” by publishing an article alleging Russians are spreading harmful and unverifiable information by citing information that is itself harmful and unverifiable. To compound the irony, the article also serves as an impressive example of why the public has a hard time distinguishing between satire & reality.

Here’s where things get concerning — the Jr. Witch-Hunting Scouts over at PropOrNot have put together a section that they’re calling “The List.” Now — instead of making fun of that hillariously ominous title — I am compelled, as both an independent journalist and socialist, to tell you that seeing this list disgusted me (as in I literally lost my appetite) and I hope that conveys the gravity with which I now write. I’ve reproduced their list in the box below and I’ve highlighted a handful of the websites that I was shocked to see blacklisted, though none of them should be on there, of course…

As you can see, WikiLeaks is officially “Russian propaganda” and so is TruthDig, a publication which Democracy Now!’s Amy Goodman and the Pulizter Prize-winning journalist Chris Hedges both write for, as well as Truthout, an independent non-profit which publishes exquisite investigative journalism and insightful editorials. Also on the list is the quality news-aggregator and activist forum, Jack Pine Radicals, who kindly link to many of the articles on this site, and Naked Capitalism, a well-curated site focused on issues of finance, economics, politics, and power, which also often includes my writing.

Why are these sites listed as Russian propaganda? 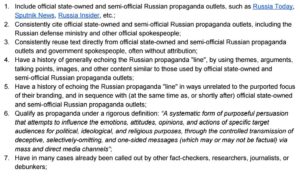 The beginning of PropOrNot’s criteria to make it onto the list of their Book-Burning Club, from The Black Friday Report =[/caption] On November 26th, the guardians of truth and ideological purity at PropOrNot released what they called “The Black Friday Report,”  which claims to explain their methods for determining which sites are insidious Russian propaganda sites, including “echo” sites who amplify their evil messages. They wrote that they created the blacklist as:

“an effort to prevent propaganda from distorting U.S. political and policy discussions. We hope to strengthen our cultural immune systems against hostile influence and improve public discourse generally.” (emphasis mine, -JL) — p4-5 of The Black Friday Report

Our “cultural immune system?” What, are Russians some kind of virus? I’ve examined their methods and found them to be deceptive but this topic deserves an article of it’s own. That’s why I’ve decided to publish a thorough follow-up by midnight on Friday which will devastatingly and incontrovertibly expose the dishonest, bigoted, and logically incoherent nonsense behind PropOrNot.com’s deceptive but scientific-sounding witch-hunting manual.

For now, I’ll briefly point out that one of the common ways that PropOrNot selectively labels indie-media they don’t like as Russian propaganda (or echo-sites) is by using their links to media associated with Russia to build a pseudoscientific “case” against them. This includes popular online news-sites like RT, which was the most popular source for news videos from 2011-12. Presumably, this is because they recieve funding from the Russian government. I guess this means that our friend Lee Camp was a no-good, communist conspirator the whole time! (don’t worry, we still love ya, Lee).

Independent Media Must Stand Up to Ideological Bullies

In closing, I’d like to exhort all of my brothers, sisters, and others in the independent media not to remain silent in the face of this ideological control — whether you’re a podcast host or a photographer, a commentator or a citizen-journalist or a reader or a watcher, this affects all of us. If we stand together and work together — if we continue to call upon our allies reason, curiosity, and critical thinking, we will prevail over all thought police, all ideological bullies, and all who are short-sighted enough to side against the collective human struggle for the liberty to express our thoughts, our ideas, and the treasuries of information. And to you — you anonymous creatures who love the dark because you’d be ashamed for the world to see what you do — to you, PropOrNot, I have but one request. I’d like to be on your list of propaganda, if you’re willing to place me there. I meet most of your criteria and I’d be happy to furnish you with the evidence which incriminates me — just ask for it and I’ll save you the trouble. You see — To me — this seems like a good list — a list of people like Amy Goodman, like Julian Assange, like my friends in the activist forums you’ve denounced as mindless repeaters of falsehoods — people who dare to speak truth to power. There is nothing I can think of that I want more than to stand with my friends and with fearless journalists and truth-sayers, whoever and wherever they may be.

Recent Articles by John Laurits Trump’s Cabinet, Part II: Revenge of the Swamp Creatures! (12/13) Counter-Propaganda Bill Quietly Creates US Propaganda Factory (12/11) Letter from Oceti Sakowin, December 6th: Sovereignty and Struggle Veterans of Standing Rock (12/5) #DAPL Easement Denied and What That Means (12/4) #DrainTheSwamp? Trump’s Cabinet is Full of Swamp Creatures (11/25) Real News or Fake News: Who Gets to Decide? (11/20) Math Says Clinton Defeated Herself — Not Third-Parties (11/11) Occupy Inauguration: #SeeYouInDC (11/9) The Land Beneath the Pipeline (11/8) The US Media is as Guilty as the Police at Standing Rock (10/31) US Claims Russia is Influencing the Election by Telling the Truth? (10/12) How the 1% Rigged the Debates Against 3rd-Parties (9/20) How Both Parties Ignore the Majority (9/14) Why Sanders-Supporters Are Mad (and Why You Should Be, Too!) (8/22) Why Aren’t Americans More Infuriated? (8/16) From the Heart of America: #NeverGiveUp (8/8)

*If you appreciated this article, please consider buying John a cup of coffee at this link to his PayPal or, if you find yourself enjoying his articles often and if you have the means, consider pledging a monthly 1$ or $3, using John’s Patreon page…