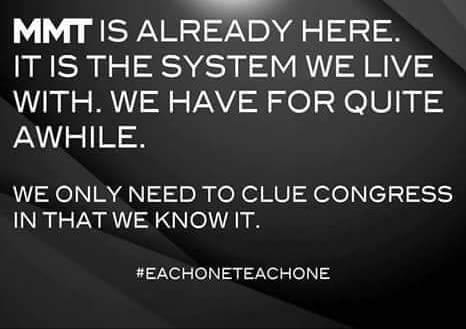 The Irresistible Allure of Debunking MMT Hit Pieces: A Response to Peter Diekmeyer

Modern Monetary Theory is anything but new and is not a “theory”. It is a description of the monetary system in a non-gold standard, non-pegged, free floating fiat monetary system. It cannot be “implemented”. It just is. It IS, in fact, the “current system” . The one you describe is ancient history.

You state, “…consumers, businesses and government borrowed to the hilt” . This implies that you believe that private budget functions just like government budget, which, in reality (all economic reality—not just MMT’s reality) could not be further from the truth. Consumers and businesses, just like municipal, county and state governments USE the US Dollar and therefore have to obtain it, while the federal government is the ISSUER of the USD. It need not obtain USD. It is not revenue-constrained, as it is the creator of USD. It does not have to consider, when spending, much other than the possibility of causing inflation, which, incidentally, can be offset in several ways.

“Debt” and “borrowing”. Glad that was mentioned. The national “debt”–do you know what that actually denotes? Since it doesn’t appear that you do, I will tell you. It is the sum total of all the untaxed USD in existence–much in the form of Treasury bonds—which, incidentally are exactly what is being referred to when you hear “borrowing”. We DO NOT “borrow”, in the traditional sense of the word, anything from China–or from ANYONE. To use China as an example, we buy stuff from them. They are paid in USD. What do they do with some of those dollars? They buy Treasurys. A guaranteed investment. We do not NEED to sell them. We do it, essentially, as a courtesy—a holdover from gold standard days when it was a necessity. We do not spend the USD used to purchase those bonds. The funds are held, essentially, in a savings account—until the bonds mature. The funds from the bonds are returned, with interest, when due. In fact, that interest is the only cost to us–or “debt” , if you prefer. They are not used for government spending any more than tax dollars are. Let me explain. The government spends dollars into existence–and taxes them out of existence. Think of a it like a balance sheet (which it actually is). Dollars are created and spent by the government. They are then taxed back. When you pay your taxes to the government, the liability is satisfied. The balance sheet now zeroes out. Those tax dollars are gone, and therefore, cannot “pay for” anything. No dollar is used twice by the government. They are created as needed.

“Debt” and “borrowing” are fallacious. The lies we are told are no more than fear mongering–a favorite implement of those who benefit from keeping us oppressed and in constant fear, as when the masses are in a constant state of fear, they are much easier to control.

Inflation? Hyperinflation? Zimbabwe? Venezuela? Here is a quick rundown.
Note: these were caused, not by “printing money” , but by political problems and shortages of critical commodities. Any excess money printing was caused by the inflation. Not the other way around, as you believe.

Zimbabwe’s issues were drought, and due to Mugabe’s freedom fighters’ seizing of farms with no plan for continued agriculture, loss of food production; loss of manufacturing capacity due to lack of raw materials—all resulting in 80% unemployment; loss of use of their National Railways due to decay; capital flight; dwindling foreign reserves in their central bank—because most were being spent on food imports. All of these contributed to the skyrocketing costs of basic necessities.

Venezuela’s problems started in 2002 with the general workers’ strike, which resulted in Chvez laying off almost 20,000 workers at PDVSA—the state-owned oil company. Then, even more lost their jobs—and the economy tanked—when oil prices plummeted due to increased global production. While prices were high, a great deal was spent on social programs, and not enough attention was paid to further developing the capital-intensive oil industry, so foreign investors had to be called in, which resulted in debt denominated in currencies other than their own. Then, by pegging the Bolivar to the USD, they accumulated debt in dollars also, rather than in their own sovereign currency, therefore making it necessary to buy more dollars to pay their debts.

By the way, it seems you are confused. Stephanie Kelton is a Professor of Economics–now at SUNY Stony Brook, originally at UMKC—and is neither in tax law, banking, accounting nor lobbying. She is driven by truth and compassion—not wealth accumulation.

Now, as far as those interest groups you are alleging will “make out big from MMT” , the biggest—and most important group—which will NOT profit financially—is We, The People. The people—who have been lied to for decades that “we cannot afford” ANYTHING that will benefit us. Deprived of necessities. Told we “can’t afford” public purpose spending of any kind–while every single year, we see ever more bloated DoD budgets–now well over $700BN per annum, and no one is asking “But, how are you gonna PAY for it?” Same with the ridiculous tax scam bill which only benefits huge corporations and the wealthy—just like everything else does. That big question is only heard when we ask for anything WE need. Infrastructure repair and upgrade. Expansion of SS, Medicare, Medicaid. How about that pittance of $7MN that simply HAD to be cut from Meals on Wheels—because “we can’t afford it”. Taking the food out of the mouths of the elderly and infirm—all in the name of “shrinking the deficit” . Heh. That very same deficit being blown up by that DoD budget and tax bill. The sweeping cuts that were proposed to, of all things, the Special Olympics—because “we can’t afford it”. The denial to us of OUR public money–not “taxpayer money” , which is yet another myth, this one designed to shut out the working poor, elderly and disabled—and to further promulgate the lie that taxes are used to fund government spending. So, tell me who has ALREADY made out big from MMT? Special interests. The big campaign donors. Decidedly NOT the people.

These are the kinds of absurd things we are told on a daily basis. The “reasons” why we live—and DIE—with unnecessary and deadly austerity imposed on us by the same ones mentioned before, who benefit from keeping the working class and the poor down–as part of their sick ideology—become quickly obvious as suspect to anyone—even those who don’t have clue one as to how the economy actually works—that something is very wrong with this picture. And clueless—or intentionally misleading—articles like this by people like you just further dissemble. Seems the powers that be want to keep truth from the masses–by any means necessary.

The “end product” of MMT is not socialism–it is a reverting from spending on special interests to spending for the people’s interests—just like it was always meant to be–supposed to be–before GREED and corruption turned it on its head.

The masses are awakening–and they are pissed off—and more than ready for change. They will not sheepishly accept your attacks on their only hope for change—which should exist not only as a hope. It should have been reality all along…