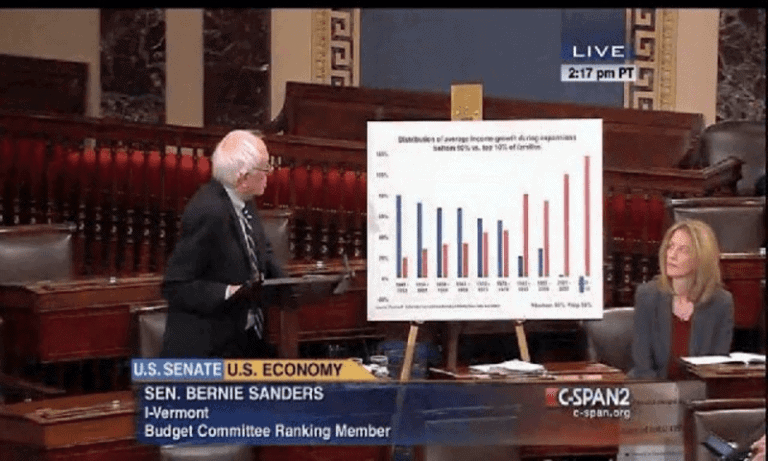 Does it make me crazy to hear Bernie Sanders talk about how he is going to pay for his programs?

Because even under the fake economics of “tax to spend”, the numbers just do not add up.

Moreover, for the economically literate, we are all too aware that Federal taxes do not fund government expenditures. In addition, the real purpose of taxation is so vital, yet muddled in folklore that it blinds us from preventing the next global financial crisis, which is literally bearing down on us like the calm before a tsunami.

But here is the catch.

Bernie Sanders knows the truth. He has repeatedly brought the Modern Monetary Theory (MMT) economists to his inner circle and allowed them greater access to media and policy-making the developers have long been deprived of—from both the mainstream media to the halls of academic journals.

Neoliberalism is a rogue military state and it became the orthodoxy through violence. Austerity-induced death. The antidote is MMT. Make no mistake about it.

It is the REAL game changer.

So while Bernie advances “taxes to pay for stuff”, his taxes are frequently of the Pigouvian variety—aka a “sin tax” . A sin tax is not laid out to “raise money” but rather deter behaviors. As behaviors are curtailed, the “revenue” dries up. So we inherently know they do not “pay for” programs. It is a smokescreen to hide the reality that he is advancing a massive series of deficit spending to reinvigorate the economy starting with a Job Guarantee and Student Debt Cancellation, to Free College and Medicare for All.

He has given MMT a place in the spotlight even while catering to the economically illiterate nation we reside in. Imagine a 45 second response with no room to explain “Federal Taxes Don’t Fund Spending”… every single neoliberal and vote blue sycophant would laugh at him and ignore him. Why? Because they are ignorant of how Federal Finance works and are immovable in their opposition to a world where taxes are not used to fund programs. Their entire lives have been based on raising taxes to pay for stuff… it invalidates and points a finger at their ignorance as to why we are worse today than they were when they took over from the last generation. That is a heavy burden—to know you failed your children and grandchildren.

So alas, Bernie Sanders is a politician that must win votes from abysmally ignorant voters and a system that punishes honesty. He has to find a way through it.

So he pushes Pigouvian taxes as a “pay for”.

But I accept it is MY job and all other MMT enlightened people to continue to pound this out 24x7x365 until we have overthrown the orthodoxy of Krugman, American Center for Progress, Fox News, The Pete Peterson Foundation and The Heritage Foundation.

I have done this for over 4 years with Real Progressives

I did this for several years at Grumbine’s Political Mosh Pit.

It is changing. But slowly. We need YOUR help.

Bernie Sanders isn’t perfect. But he is doing for us what no one has ever done before…

He opened the door.

It’s up to us to walk through.