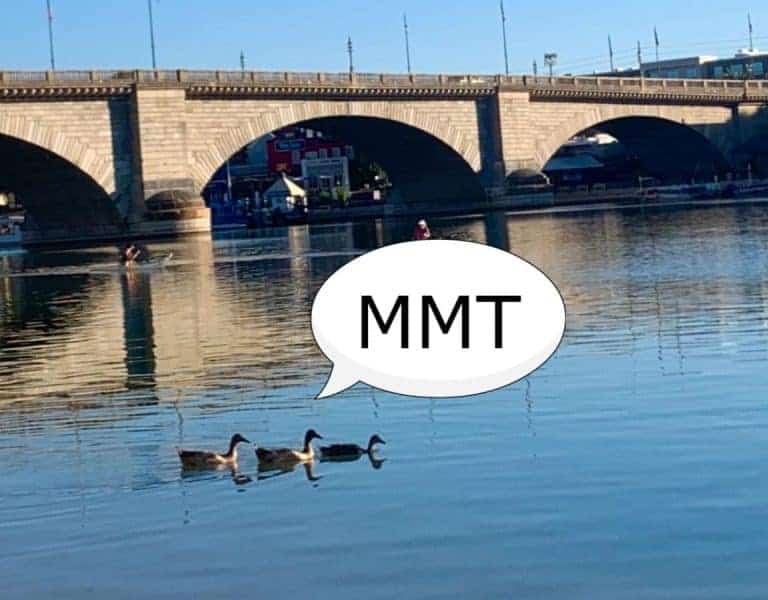 MMT Across the Pond with Patricia Pino

My desire to expand my knowledge about how Modern Monetary Theory operates within the economic system of government, so that humanity can overcome the real threat we are  facing regarding the extinction of our species and so we can thrive evolving our consciousness to reach new levels of human potential, has led me to The MMT Podcast with Patricia Pino and Christian Reilly. Both Patricia and Christian demystify economics with their straightforward approach, aimed at anyone who ever felt lost in the sea of economics jargon. Their MMT podcast offers economic analysis of current issues from a Modern Monetary Theory perspective. Their warm, insightful approach makes this topic easily understandable and enjoyable. Listen once — you will want to share this with others and you will we keep coming back for more! Here is one of my favorite episodes:

I recently had the honour to interview Patricia Pino.

Patricia Pino, engineer, artist, activist and one of the hosts of The MMT Podcasts. Patricia’s focus to raise awareness, so that people are not fooled by the established economic narrative, led her to write articles for a small outlet for a couple of years explaining MMT.

How did you get involved with the podcasts?

Patricia Pino: When Ellis Winningham mentioned on Facebook that a UK comedian, Christian Reilly was looking for a UK activist to interview for a podcast and he had actually read an article I wrote on Greece and wanted to talk about it,  I jumped at the opportunity. We both enjoyed it very much and when he suggested we have a regular podcast I was very excited about it.

Is the UK similar to the US in that of MMT?

Patricia Pino: The UK economy is not that dissimilar from the US economy. Both enjoy high levels of monetary sovereignty. And though the US is more dominant in the global situation, we have often been partners in crime. The weapon of choice from some economists here against MMT is to say that MMT only applies to the US,  which makes no sense at all. Not just because Japan shows MMT is not exclusive to the US, but because according to these economists a nation like the UK (6th richest in the world) is forced to accept that poverty is inevitable, while we watch US  progressives as Bernie and AOC campaign for policies such as Job Guarantee to end unemployment in their own country… It just doesn’t make sense.

Activists are slowly becoming aware of MMT, not fast enough, unfortunately, so I asked her, is it better or worse in the UK than in the US?

Patricia Pino: I think there are key cultural differences that makes progress in both countries very different.

My perception is that while we have a lot in common with the US  and share many of their fellow activists’ difficulties, you guys have more cultural tools at your disposal. Some concepts like ‘freedom’ and ‘rights’ are strong in the US, though corrupted by decades of neoliberalism, can be re-appropriated by progressives and used to frame progressive policies in a way that resonates with people’s sense of identity and values.
In the UK we have a rigid class structure inbuilt in our culture. What can you expect from a nation where most people see Monarchy as representative of Britishness?  The result is that concepts like ‘Democracy’ have less cultural resonance here than they do in the US.

So overall the UK progresses slower. Messaging that works in the US may not work here yet at the same time, I feel we can learn a lot from each other, and already have.

Unfortunately, no founding MMT economists are living here which does not help the situation.

Patricia Pino: I don’t think anyone is interested in anything until they understand how it will impact their lives and the things they already care about. Which is why I always try to relate MMT narratives to people’s values. In my case, I mostly speak with Lefties. So I focus on communicating to them why the Left needs MMT right now. That economic truth is on our side.

I find many people have a stubborn resistance to MMT due to the layers of misinformation the corporate media has imprinted on their minds.  What advice can you offer to help break through their illusions of how the money system operates?

Patricia Pino: It will always be hard to compete against the dominant narrative. Patience is important. As well as consistency and unity in the movement, embracing new members as we go. Sometimes the change is so slow as to be imperceptible, but there is progress. Just ask the guys who’ve been doing this for over 10 years. We have much to feel pleased about but we have to carry on slowly chipping away at the establishment’s dominance. Force them to justify themselves to us and it will soon be evident that it is all built on sand.

My advice to those newly interested in economics is to trust no one, not even us at the MMT Podcast. Learn economics. There is a growing list of resources made for laypeople, find a narrative that makes sense to you, then question it, and question it again.  Do not be afraid to ask questions that you feel might be silly. Trust me, they are not. This is the route I took, and it brought me right to MMT.

I enjoyed my interview with Patricia Pino and look forward to her future podcasts. I personally could never understand why people could accept a money system that enslaves people, instead of empowering people so that we can excel and reach our full potential: after all, the money system is man-made. Fortunately, we do not have to reinvent the wheel, because the US at the Federal level is already on the fiat system. We can never go broke or bankrupt. We do not borrow money. The word debt, at the federal level, is merely an accounting system that measures the amount of money that Congress has issued into the system versus the amount taxed out of the economy.  So why does corporate-owned media have people spellbound into believing we can not afford to do things the right way when it comes to issues humanity is facing? My conclusion is they thrive by keeping us in the dark. Corporate-owned media profits from prescription drug ads; automobile (big oil) and chemical companies care more about their profits than the issues humanity is facing.

As bleak as this picture appears, humanity is awakening. Our desire to evolve our consciousness so our future generations can thrive will overcome the neoliberal agenda of corporate control of the money system and government. As Patricia mentioned, the MMT movement has been growing in the last 10 years. The dedication and patience of expert economists Stephanie Kelton, Warren Mosler, John Harvey, and Ellis Winningham to educate the public on how the Federal economic system functions are inspiring. As progressives join together to share information on  Modern Monetary Theory, we empower each other with

the knowledge that benefits all of humanity. Building a strong economy is the foundation we require so that we can thrive and excel as a species. With innovation, this economy will be designed to protect the environment and the ecosystem. Progressives know MMT is how Congress creates the money to pay for these projects.

I encourage anyone new to MMT to listen to the following podcast and be prepared to come away empowered!