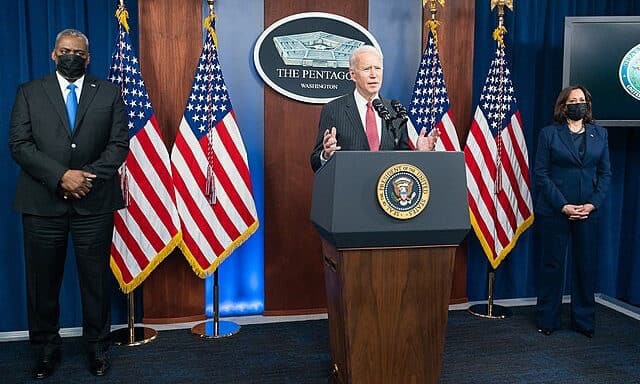 To enrich the military industrial complex

The climate crisis is not a national emergency, but the war in Ukraine is. According to the state department:

The Secretary of State has determined and provided detailed justification that an emergency exists that requires the immediate sale to Ukraine of the above defense articles (and defense services) in the national security interests of the United States, thereby waiving the Congressional review requirements under Section 36(b) of the Arms Export Control Act, as amended.

This was released April 25 and refers to a total of $165 million dollars in additional arms sales to Ukraine.

It turns out that there has been a national emergency regarding Ukraine since Barack Obama signed Executive Order 13660 on March 10, 2014. The scope of this “emergency” has been expanded continually, the latest expansion being on February 21, 2022 with Executive Order 14065 by President Biden. The White House Press Release describes the actions taken in this order:

On February 21, 2022, the President issued Executive Order 14065, which further expanded the scope of the national emergency declared in Executive Order 13660, as expanded in scope in Executive Orders 13661 and 13662, and relied on for additional steps taken in Executive Orders 13685 and 13849, and found that the Russian Federation’s purported recognition of the so-called Donetsk People’s Republic or Luhansk People’s Republic regions of Ukraine contradicts Russia’s commitments under the Minsk agreements and further threatens the peace, stability, sovereignty, and territorial integrity of Ukraine, and thereby constitutes an unusual and extraordinary threat to the national security and foreign policy of the United States.

Therefore, in accordance with section 202(d) of the National Emergencies Act (50 U.S.C. 1622(d)), I am continuing for 1 year the national emergency declared in Executive Order 13660.

There is no clear explanation as to why the situation in Ukraine “constitutes an unusual and extraordinary threat to the national security and foreign policy of the United States.” There can be no explanation for this because it simply does not. The distance from the US to Ukraine is 5,687 miles. The war in Ukraine is not a threat to national security. Yet it is being used as an excuse to ship more and more weapons there which only serves to line the pockets of the military industrial complex.

This is not a surprising development as the Secretary of Defense is Lloyd Austin III, who sat on the board at Raytheon. In recent remarks to the Ukraine Defense Consultative Group at Ramstein Air Base, Germany on April 26, Lloyd Austin III said:

So, I’d like this whole group to leave today with a common, transparent understanding of Ukraine’s near-term security requirements—because we’re going to keep on moving heaven and earth to meet them.

In case this isn’t clear, moving heaven and earth means spending as much money as possible on armaments from defense contractors like his former employer, Raytheon. He clarifies this later in the same speech:

Together, we have committed more than $5 billion dollars of equipment to support Ukraine’s self-defense. That includes some $3.7 billion dollars that President Biden has committed to help Ukraine since Russia’s invasion began.

Five billion dollars has been funneled directly to the military industrial complex. Much of this has been done directly without congressional oversight by Biden himself. This includes two drawdowns of $800 million dollars each and the latest $165 million dollars referred to above. The major beneficiaries of this latest batch of military spending will be the defense contractors. As The Hill describes:

This is a description of what UC Santa Barbara Professor of Sociology William Robinson has referred to as militarized accumulation. In a recent article with Truthout, he describes this phenomenon:

Militarized accumulation refers to a situation in which a global war economy relies on the state to organize war-making, social control and repression to sustain capital accumulation in the face of chronic stagnation and saturation of global markets. These state-organized practices are outsourced to transnational corporate capital, involving the fusion of private accumulation with state militarization in order to sustain the process of capital accumulation.

While the military industrial complex benefits, the majority of the working class are still suffering through the COVID-19 pandemic and the climate emergency. The US Misery Index is steadily climbing with record inflation. Colorado and other parts of the west are bracing for what could be a another record fire season. Yet the Biden administration has not used emergency powers to fight climate change or provide COVID relief. Instead, just before Earth Day, the Biden regime announced:

Today, the U.S. Department of Energy announced that it has awarded contracts for all of the initial 30 million barrels it put up for sale as part of President Biden’s historic Strategic Petroleum Reserve Release. These barrels will be delivered in May and June, and are the first U.S. sale in the largest release from reserves from both the United States and the rest of the world in history.

Nothing like burning more fossil fuels to address the climate crisis. The Biden regime is fueling the crisis with war and fossil fuel extraction, rather than addressing it. All for the profits of a select few capitalists at the expense of the international working class.

This article was originally published at An Appeal to Reason