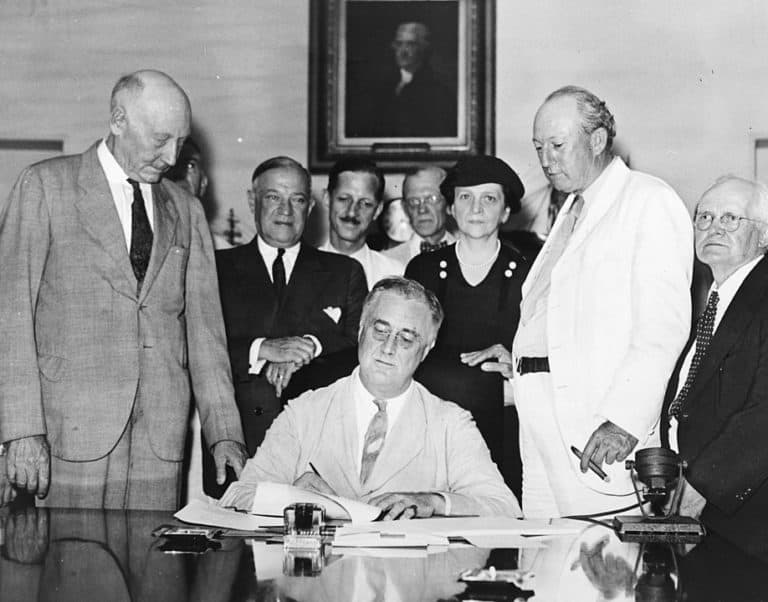 Freedom: The Burden of Accountability – Part 1

The following article is part of a larger, five–part series (part 2) on accountability and reform as they pertain to freedom. Focusing primarily on American politics and history, the series draws on America’s continual struggle towards that “more perfect society.”.

“The idea of freedom is inspiring. But what does it mean? If you are free in a political sense but have no food, what’s that? The freedom to starve?” – Angela Y. Davis

New Deal Timeline, as reported by The Balance

As you can see, once-unprecedented federal spending led to exceptionally strong economic growth during the entire New Deal timeline, except for post-war 1945, which had a very small contraction, as compared to the effective growth of the years preceding it, of 1%.

The New Deal had several components. Over time, it established all the following:

There were also several Federal Jobs programs and other pieces of the New Deal that I didn’t include. It was a sweeping, broad, set of legislative packages that rose to the occasion and allowed everyday Americans to rebuild America and receive a social safety net, in addition to individual wealth. It also saved capitalism from the brink of revolution.

As important as the New Deal was, it’s equally important to realize the groups responsible for pushing Franklin Delano Roosevelt (FDR) “left” to institute and fight for these programs.

Communist Party of The United States of America (CPUSA)

As you can see, the poor and the middle-class fought together and used their labor and energy to “push FDR left.” Uniting against America’s capitalist class that had led them into unprecedented ruin and around shared ground, they succeeded in pushing reform. If FDR was as committed to austerity as someone like President Biden, and did not pass these reforms, there likely would’ve been a second, communist, American revolution.

An American Red October would’ve changed world history. Organized religion also had a role in pushing FDR to be the most progressive president in history, one who achieved greatness for many through reform. Unfortunately, women and BIPOC were largely excluded from the gains of the New Deal, despite shouldering as much or even more of the work than the primary beneficiaries: cis and straight white men.

“Americans are right to believe the American Dream is fading. But that dream only became a possibility for white men as a result of the labor struggles and reforms of the New Deal, and it began to extend to minorities and women only after the civil rights and women’s movements of the 1960s and 1970s.” – Stephanie Coontz