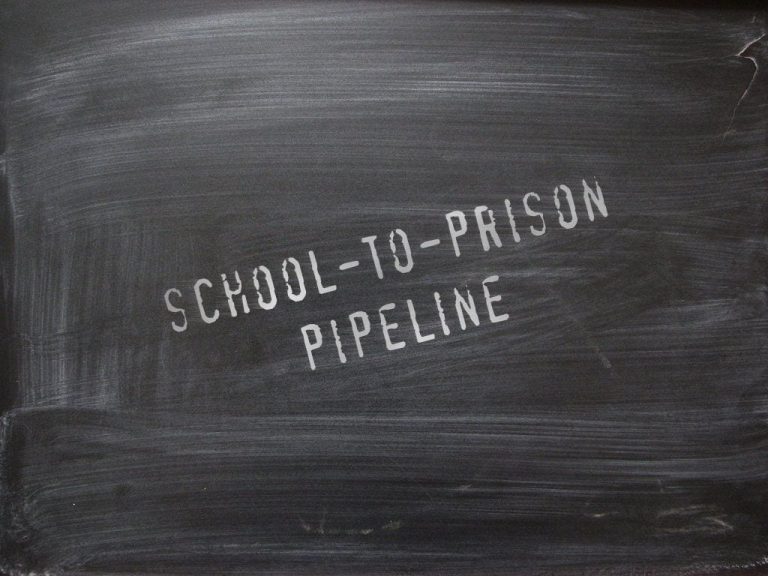 We’ve all seen the videos and heard the stories. A student mouths off and gets her desk flipped as she gets dragged across the floor; an autistic child is having a situation and the school security zip ties his hands behind his chair; increasingly, metal detectors can be found at the entrance to public school buildings. The result is a school-to-prison pipeline that has devastating results on communities and students.

According to the NAACP’s (2014) Criminal Justice Fact Sheet, the prison population has quadrupled in the last 35 years. One of the causes appears to be the zero-tolerance policies that started to become prevalent during the 1990’s (around the same time as Hillary Clinton’s infamous “superpredator” remarks). As the country’s focus began to shift toward school violence, the system’s response was to assume that all students must face severe and quick repercussions for infractions. The main arguments for these policies are consistency in situations and the deterrent for other students who may be considering similar actions. (National School Safety & Security Services n.d.)

While arguments promoting this practice maintain that it will lead to more consistent and fair discipline policies, studies have shown that African-American and Latino students are disproportionally targeted for enforcement of these “consistent” rules. The Civil Liberties Union (2008) studied school-based arrests in Connecticut, only to find that students of color were more likely to be arrested for the same infractions at the same schools. In fact, in one town, African-American and Latino students were 10 times more likely to be arrested for possession of drugs, alcohol, or tobacco, when compared to their white counterparts. Once they are in the judicial system, it becomes difficult to get out. As a result, our schools have essentially created articulation agreements with their local prisons, consistently feeding them inmates. So what can we do to put an end to the disastrous effects this policy imposes on our communities?

As with most things involving the government, there isn’t a quick fix. Dismantling this institutionalized racism will take a grassroots movement to convince local school boards to rewrite policies. Compiled below is a list of local organizations hoping to offer alternatives.

The Urban Youth Collaborative, comprised of NYC students, is an organization fighting for real school reform. Through their diligent work, they’ve managed to introduce new legislation that would require greater transparency on school arrests and suspensions.

Blocks Together is a community group on the west side of Chicago geared toward creating systemic change within their area. They are fighting for restorative justice in schools, as well as better training for security guards.

CADRE in south LA is a community group focused on training parents to be advocates for their children. Through the parental advocacy, they hope to create a public discourse on students’ human rights in the schools.

These are just three local organizations fighting to end the discipline policies that lead to severe discrimination and lifelong stigmatization of students. Ultimately a system where prisons are privatized, supports the over-incarceration of students and adults alike. Now is the time to get involved and make change.