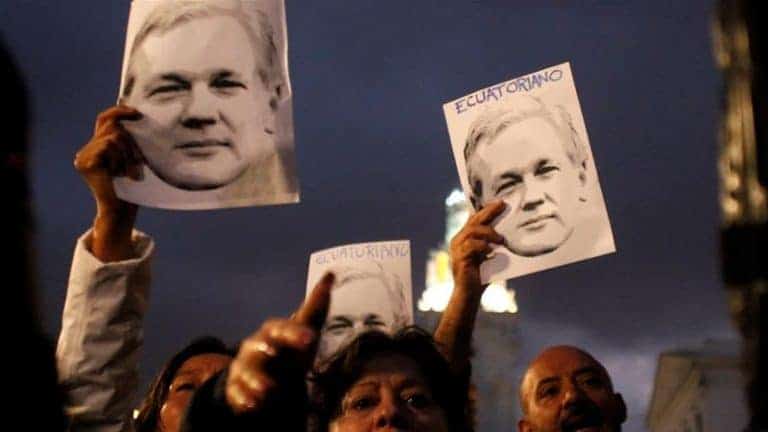 We Have To Talk About Julian

Ultimately, we knew it was coming. We knew the powers-that-be (namely the US and UK) would find a crack to widen and break through, to capture a man who’s had a target on his back — a man who, as publisher, did more for journalism than mainstream media has done in decades. Those exposed by Julian Assange and WikiLeaks regard him as a criminal. Those in search of truth and transparency believe he’s a hero. However, he is a mortal man, one with flaws that were weaponized against him.

What caused Ecuador’s turn on Assange? Reportedly, a photo of Ecuadorian President Lenin Moreno feasting on lobster and other savory goodies while lounging on a luxury hotel bed. It would seem fairly harmless except for the fact that Ecuador has been enduring austerity measures [1] since Moreno reneged on his platform shortly after election. According to Denis Rogatyuk, writing for Grayzone: “WikiLeaks’s decision to re-publish the details of Moreno’s use of off-shore bank accounts in Panama, infamously titled INA Papers after the name of the shell corporation at the centre of the scandal (INA Investment Corporation) appear to be the main cause for the president’s decision to expel Assange from the embassy.” It would seem, then, that the former Vice President under Rafael Correa (a progressive who approved Assange’s asylum in 2012) decided the thorn in his side needed to be removed.

The UK obtained an arrest warrant for Assange’s bail violation around the same time, and when Moreno withdrew asylum, the crack became a hole, and the UK absconded with Assange.

Once in Westminster Magistrates Court, the US unsealed its charges against Assange: “conspiracy to commit computer intrusion.” He is accused of helping Chelsea Manning to download four “nearly complete” US databases containing a massive trove of information, between January and May 2010. “During that period, Assange allegedly “agreed to assist Manning in cracking a password stored on United States Department of Defense computers,’ which allowed her to log on under a different username, making it harder for investigators to track. Assange later released this information via the Wikileaks website.”

Yes, it was coming and well-planned by Moreno and others from the Assange opposition. From severing his internet to installing more hostile staff, from sharply restricting his visits to ramping up surveillance, the clock started ticking faster. And faster. From Defend WikiLeaks on April 10, a day before his arrest:

“WikiLeaks held a press conference this morning to reveal that it has uncovered a massive spying operation on Julian Assange and his associates in the Ecuadorian Embassy in London. WikiLeaks editor-in-chief Kristinn Hrafnsson, barrister Jennifer Robinson, and Former Consul of Ecuador Fidel Navarez convened in London to detail a surveillance trove including thousands of photos, videos and audio recordings of Julian Assange, creating a “Truman Show existence” designed to support the effort to oust the asylee. The material includes recordings of privileged legal, medical, and personal communications in a startling invasion of Assange’s privacy.

Furthermore, the material has been offered up for sale to WikiLeaks representatives for the price of 3 million Euros, with the threat of publishing it otherwise. WikiLeaks requested the assistance of Spanish police, who conducted a sting operation against a number of unnamed individuals thought to have been involved. Spanish authorities are now investigating the matter as a case of extortion.”

There have been many gleeful cackles from those who hate Assange. But even more have come out in his defense, recognizing the US charges would set a dangerous precedent for whistleblowers and journalists everywhere.

Owen Jones wrote in the Guardian: “Yes, this is a defence of journalism and media freedom. But it is also about the attempt to intimidate those who expose crimes committed by the world’s last remaining superpower. The US wishes to hide its crimes so it can continue to commit them with impunity.”

Glenn Greenwald and Micah Lee of the Intercept also gave dire warnings: “In other words, the indictment seeks to criminalize what journalists are not only permitted but ethically required to do: take steps to help their sources maintain their anonymity.”

As longtime Assange lawyer Barry Pollack put it: “The factual allegations ” boil down to encouraging a source to provide him information and taking efforts to protect the identity of that source. Journalists around the world should be deeply troubled by these unprecedented criminal charges.'”

When video surfaced of Assange being unceremoniously carried out by UK police whilst clutching Gore Vidal’s History of the National Security State, many of us were struck with grief, helplessness, and anger (righteous, at that). And the question: What now? What can we as citizens do now?

In practice, precious little. We can take it to the streets, to the inboxes and phone lines of our leaders, to organizing. There’s power in that, but as far as immediate action we as citizens can take, I won’t pretend to know more. I am fairly sure what Julian would want us to do: keep fighting.

Keep fighting for his immediate release.

Barring that, demand that he NOT be extradited to the US.

Keep fighting for the freedom that Julian fought and continues to fight for.

Keep fighting for the economic justice, environmental justice, equality and peace with justice, and for the TRUE democracy we all seek — not just here at home, but for all of us humans.

It’s not over, so remember three things as events unfold:

Whatever you may feel about the creator and father of WikiLeaks personally — and whatever else he’s alleged to be guilty of — WikiLeaks is a valuable resource that was, I believe, meant to survive and thrive beyond Assange himself. As a reminder: WikiLeaks has won awards for its coverage and exposure of secrets dishonestly concealed from citizens by corporations and even their governments. It has a near-100% record of accuracy, and is cited in “over 28,000 academic papers and court filings.” With such a legacy, don’t think for a second that he doesn’t have a number of back-up plans in preparation for this moment.

The Sweden rape charges should be investigated: anyone’s claims of sexual assault or rape should be taken seriously. I’ve heard both that the charges were dropped AND that they were being brought forward again, and have yet to confirm either with certainty. However, with Pompeo and Sessions being behind this, these charges if indeed being pressed again, are being weaponized. This isn’t about justice for the women in question. This is a vendetta. [I’ll expand further on this in a separate piece.]

Lastly, Julian Assange Is not dead. Detained? Yes, however unfairly; being tried on trumped-up charges, if he’s going to be tried at all; but at this point, he’s still alive. Don’t mourn him before he’s even in the grave.

Support and attend the protests wherever they may be.

Support independent journalists like the ones cited in the article.

But, most importantly, #KeepFighting. No one person, be it Assange, Snowden, or Manning, can save us. That’s not how it works. We must take up the mantle when it falls — no matter who falls.