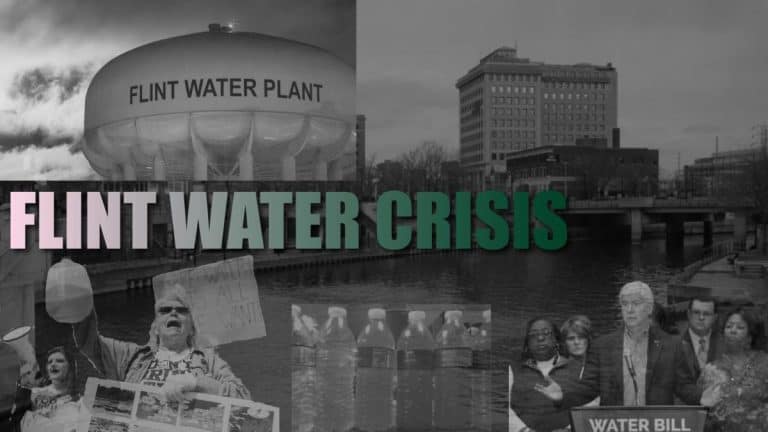 Flint: A Case of Austerity, Neoliberalism, and Environmental Racism

Flint is the seventh-largest city in Michigan with a population of almost 100,000 people. The majority of Flint’s population is African American (57%) and low income (currently, 45% of residents live below the poverty level). The city’s child poverty rate is 66.5%. Flint has some of the highest rates of poverty and crime in the nation as a whole. Governor of the state from 2011 until 2019 was Republican Governor Rick Snyder.To understand what happened in Flint, we need to understand changes Governor Snyder made very soon after he took office in 2011. On March 16, 2011, Gov. Snyder signed Public Act 4. This act broadened an earlier law that provided an “emergency financial manager” for financially distressed cities and school districts. Under this new state law, the emergency financial managers became emergency managers of the city with the power to cancel or renegotiate city contracts, liquidate assets, suspend local government, unilaterally draft policy, and even disincorporate. The emergency managers in Michigan have done all of these things except disincorporate.
Flint was one of the first cities to be assigned an emergency manager in 2011, and their first act was to suspend local government. It is essential to note that from 2011 to 2015, Flint city officials had no real control over municipal policy in the city.

What Happened in Flint

In the spring of 2014, the city of Flint, Michigan, was ordered to change its water supplier from the Detroit Water and Sewage Department, which drew fresh water from Lake Huron to Flint’s out-dated water treatment plant and to begin drawing water from the Flint River. This change was made to save money in the economically struggling city by Flint’s emergency manager at the time, Darnell Earley. The local government assured the residents that there would be no change in the quality of their drinking water but that the cost of their water would go down (the water bills in Flint were among the most expensive in the country). Almost immediately after the switch, residents began to notice that their water tasted and smelled foul and was discolored, often with sediment in it. The city insisted that it met all the requirements for safety.

The water was, in fact, not safe. There was a very serious problem in Flint. The new water treatment program did not include corrosion control. The staff at the plant was reportedly told by the MDEQ (Michigan’s Department of Environmental Quality) that it wasn’t necessary. This is a violation of federal law. Furthermore, it was found that the old plant was not sufficient to deal with river water, which tends to be much more corrosive and more difficult to treat than lake water. This was a very dangerous combination and the perfect storm for the disaster that was to occur in Flint.

In general, the United States infrastructure is very old and in need of costly repairs. This includes the plumbing in many U.S. cities, Flint among them. In large systems, it is required to add corrosion control treatment to keep the pipes from disintegrating. This protects the pipes and public health.

As the water issues continued into 2014 and the residents of Flint became more alarmed, the public figures, such as Mayor Walling, continued to assure residents to have patience, that kinks would be worked out, but that the water was completely safe to drink. He even went as far to state that residents were wasting their money by buying bottled water. This further outraged residents who were displaying their rust and coffee-colored water at meetings and complaining of the foul odor and taste.

Before the end of the summer, the first of many advisories came out telling residents to boil their water. E. coli had been detected many times in the system. There was still an agreement among city officials though that the water coming from the treatment plant met all safety standards and requirements of the Safe Drinking Water Act. As a fix, the city announced it would increase the disinfecting chlorine treatment.

In October General Motors announced it would be switching to a neighboring suburb’s water supply due to rust and corrosion forming on the engine crankshafts and blocks. This triggered alarm in the city’s residents. Many were left wondering, if it can corrode metal what might it be doing to the human body?

In a packed meeting on a cold January evening, residents who were already angry about the condition of their water were informed that the city had recently violated federal limits for trihalomethanes or TTHMs (four colorless, odorless chemical compounds that are a byproduct of the chlorination process). Residents were being over-chlorinated in attempts to keep the water safe from E. coli. This is a violation of the Safe Drinking Water Act, and residents are required to be informed. In a formal letter, residents were notified of the steps the city was taking to rectify the issue and told several times that this was not an emergency. Elderly individuals with compromised immune systems were advised, however, to consult with their doctors about drinking the water.

This only frightened residents more. Bottled water drives were being organized all over the city; stores were cutting prices on bottled water, and churches were organizing donations. Many residents were afraid and refused to use the water for drinking, cooking or bathing. Flint’s schools began buying the water used for food preparation and foods served to students. Even the drinking fountains in the children’s museum were closed. Amidst all this, citizens began to coordinate and unite against a city and state government that was doing nothing to help them.

One such group, the Coalition for Clean Water, distributed information and coordinated activists in 2015 even more so after a resident, LeeAnn Walters received disturbingly high levels from lead tests. This resident reached out to an official at the EPA, a gentleman by the name of Miguel Del Torel responded in February with concern that her children had rashes and were losing clumps of hair. This EPA official was instrumental in helping her run a series of tests at her home. By March it was confirmed she had high lead levels and that her children had lead poisoning. He brought this to his superiors, who did nothing. Del Torel took it upon himself to contact the state to find out if proper corrosion controls had ever been used to treat the polluted river water. In one response Del Torel had been assured by the state that “optimized” corrosion controls were being used. It would, of course, become clear that no such controls were being used. The state repeatedly said the issue must be with Walters’ own home pipes. Del Torel was able to confirm it was not her home pipes. A spokesman for the MDEQ, catching wind of Flint’s lead concerns made an announcement on the radio assuring citizens there was no lead in the water. Word continued to spread in Flint that citizens should test their water and their children. Churches began raising money and giving out water filters. Del Torel brought in Marc Edwards, a Virginia Tech scientist, who had worked on the Washington D.C. lead water crisis a decade earlier. He was able to confirm lead in more homes. In September a Michigan State pediatrician by the name of Mona Hanna-Attisha, with the help of the Flint Hurley Medical Center, was able to confirm blood samples of more than 1,700 Flint children with elevated levels of lead. A state public health official responded that it could not be the water. By the end of September national media was finally picking up that there was a big story here and major news outlets descended upon the town. By the beginning of October a health emergency was finally being declared by Genesee County. Citywide tests were conducted.

It confirmed what should have been obvious: when corrosive water moves through lead pipes and plumbing, and isn’t treated with corrosion control, a lot of lead ends up in the water. That’s especially true if the pipes are old, leaky, oversized and cross long stretches of vacant land. In Flint’s case, water samples were well over the federal action level for lead, and nearly three times over the safety level set by the world health organization. The series of problems with the water were connected. Rapidly corroding iron negated the chloride treatment. Without the disinfectant, the water was vulnerable to bacteria growth.

Residents were aware of the E Coli in the water and the subsequent advisories to boil their water, what many didn’t make the connection with was the outbreak of Legionnaires’ disease during this time which affected at least 90 people and killed 12. When the first warnings went out for E. coli the city added more chlorine to the water, causing the spike in TTHMs. This caused the corrosion of the pipes to worsen at a faster rate, causing lead and iron to leach into the water. The excess iron in the water was a perfect nutrient for the breeding of Legionella.

No amount of lead exposure is safe, and there is no known cure for lead poisoning. Exposure to lead can cause health problems ranging from stomach distress to brain damage. Children are especially susceptible as lead can affect their brain development, and can result in anti-social behavior, anemia, hypertension, and toxicity to the reproductive organs. One research team found that the water switch correlated with a dramatic drop in the fertility for women in Flint and a 58% increase in fetal deaths.

When residents noticed there was something odd about their water, they asked for help. They organized. They made themselves seen. But they were routinely dismissed. Among the many ravages attributed to the water crisis ” the rashes, the hair loss, the ruined plumbing, the devalued homes, the diminished businesses, the home owners who left the city once and for all, the children poisoned by lead, the people made ill or killed by Legionnaires’ disease ” perhaps the most devastating was that people lost faith in those who were supposed to be working for the common good.

In order to understand what really happened in Flint we must have a clear understanding of the terms Austerity and Neoliberalism only then can we truly understand the roles they play in what was allowed to transpire in Flint.

Austerity is a political-economic term referring to policies that seek to reduce the government budget deficits through spending cuts, tax increases, or a combination of both. It is a situation in which people’s living standards are reduced. Neoliberalism is a more contemporary term which refers to market-oriented reform policies and focuses on reducing state influence in the economy, especially through privatization and austerity. More specifically, this happens through eliminating price controls, deregulating the capital markets, and lowering trade barriers.

— Part 2 will look at the effects of environmental racism and economic disparities on the water crisis in Flint and ask whether the Green New Deal could have protected the residents.