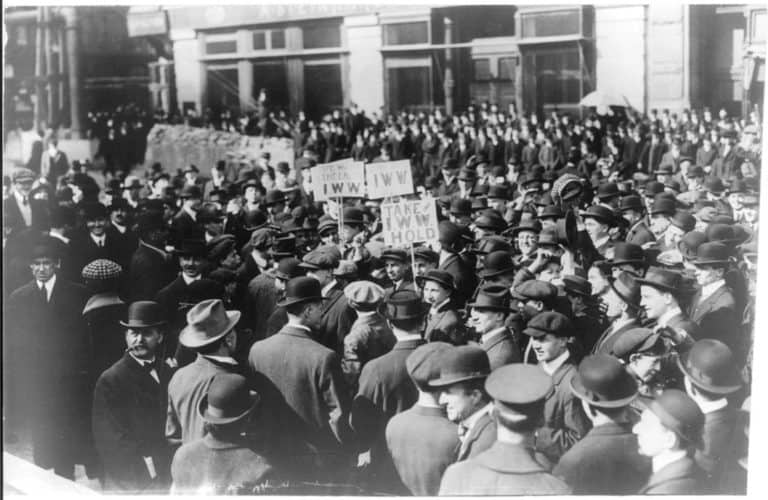 “Better to die fighting for freedom then be a prisoner all the days of your life.”

Times like this are, at the risk of sounding cliché, unprecedented. However, the solutions are easily found in the patterns of history. Militant unionism and working-class solidarity may be our only hope. We must break the capitalist machine in order to survive. If militant unionism fails, the working class must be prepared to fall back on armed uprising. The preparation alone may be enough to win real relief. The cycles of history are there to teach us what to do if we only listen to the past.

“Seattle has had a long tradition of dynamic labor organizing. With the opening of the northwestern quadrant of the United States at the end of the nineteenth century, it emerged as the economic center of the mining, timber, shipping, and railroad industries.

Industrial conditions were unsettled, with an aggressive employer class that sought to keep wages low and profits high, and who worked to keep out any type of workers’ organization. They drew their workforce from the many migratory workers available and used any method to keep them divided and powerless.

The workers, however, refused to accept their lot. They began to speak with a militancy that demanded major changes in the established order. To achieve success, they found the craft orientation of the American Federation of Labor too restrictive and sought to create industrial unions.

Among the organizations they turned to was the Industrial Workers of the World (IWW), which advocated “One Big Union”—a union of all workers. In the first two decades of the twentieth century, the IWW gained a strong presence throughout the region, particularly among miners, lumber workers, and railroad workers.

After World War I, shipyard workers sought higher wages from the federal government, which oversaw the construction of vessels, and on Jan. 21, 1919, 35,000 unionists went on strike. Their action proved to be a catalyst to other unions in the city, and two weeks later, on Feb. 6, over 25,000 others, including 101 AFL locals, joined them in the first general strike of the new century.”

What we’re seeing today is extremely advanced, late-stage capitalism, and as capitalism does, it is in crisis. After all, capitalism crashes every 5-8 years, and kills 100,000,000 (at least) from extreme poverty alone every 5 years. Plus, another 122,000,000 have died solely from capitalism’s wars between 1917-1992.

Social Democracies wouldn’t exist if they didn’t have to compete with the U.S.S.R. The model of social democracy relies on both direct and indirect exploitation of the global south, extracting its resources and labor in order to funnel wealth into the clutches of these social democracies’ economies. The secret of the Scandinavian model, like all other forms of capitalism, is blood and exploitation.

Despite all the propaganda claiming the contrary, capitalism doesn’t lift people out of poverty, rather, it causes poverty. Scarcity doesn’t exist, it is a manufactured illusion used as a contrivance to keep prices high and people out of homes and away from other necessities. Here’s some key facts on the housing issue alone:

Neither dominant political group has a real solution to homelessness in America. Liberals are too busy feeding on moral outrage from whatever crazy things the conservatives are doing, and conservatives are too busy planting the seeds for stripped rights in order to feed liberals and achieve the joint goal of entrenching the status-quo and finalizing the serfdom of the United States working class.