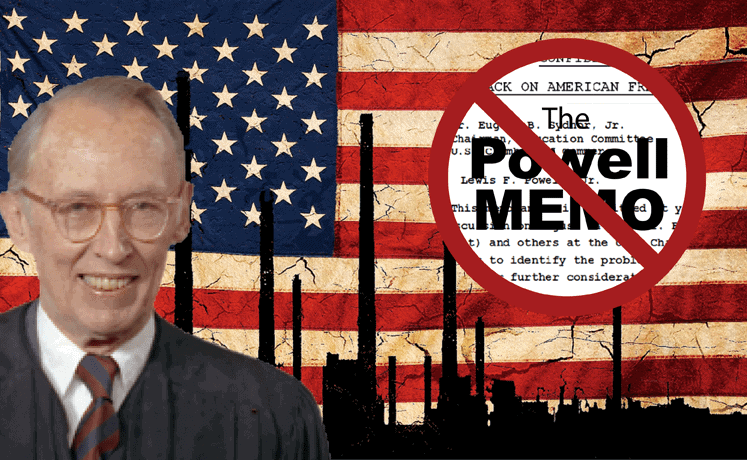 Response to the Powell Memo: A Progressive Blueprint Part I

In 1971, just two months before he was nominated to the Supreme Court by Richard Nixon, Lewis Powell wrote his now infamous memo, which was instrumental in helping bring about the establishment of corporate neoliberalism in the US.

Interestingly, the memo was written just one week after Nixon ended the Bretton Woods system, which removed the dollar from being pegged to gold. This more flexible fiscal policy should have allowed the people to prosper; unfortunately, however, corporate interests, in following the tenets set up in the Powell Memo, ensured public dollars would be funneled to private corporations and the wealthy instead.

What follows is a direct rebuttal to the original Powell Memo, in six parts, (2, 3, 4, 5, & 6), frequently using Powell’s own words, which instead offers a progressive plan to take back the country from the ravages the corporate oligarchy has committed on the American people and restore the freedoms and protections to which we are entitled.

Dimensions of the Attack

No thoughtful person can question that the average American is under broad attack by a corporate kleptocracy. This attack varies in scope, intensity, in the techniques employed, and in the level of visibility.

There always have been some who opposed our Constitutions guarantee of a government of, by, and for the people, and who preferred some form of feudalism instead (capitalism), and their numbers have been increasing. There have obviously been few corporate critics of the capitalist system, although some corporations have tried to improve the living conditions for the working person rather than seeking to exploit the worker for the sake of greater profits. Unfortunately, those corporations are few and far between.

What now concerns us is quite new in the history of America. We are not dealing with sporadic or isolated attacks from a relatively few right-wing extremists in government or even from the capitalist cadre; rather, the assault on the working people has been broadly based and consistently pursued. It has gained momentum and converts over the past 40 years of increasingly entrenched neoliberalism.

The average American has seen their income shrink while the 1% have made more money than they can ever possibly spend due to policies that have removed the protections that once kept the oligarchs from the plunder of what should have been our communal assets.

Sources of the Attack

The sources of the attack are varied and diffused. They include, not unexpectedly, the capitalists, large corporations, bought politicians and wealthy oligarchs who would destroy the entire United States, both environmentally and economically, for the sake of their greater wealth. These extremists of the right are few, well financed, and increasingly are more reviled by the ethical elements of society, than ever before in our history. But although they remain a small minority, they are the principal cause for concern.

The institutions which, until recently, the people counted on for exposing the lies and corruption of government, have been either bought or silenced: the media, the college campus, the arts and sciences, and, above all, the Democratic Party. Those who were once the most articulate, the most vocal, the most prolific in their writing and speaking, have fallen silent under a repressive government that seeks to stifle logic and dissent.

The mainstream media for varying motives and in varying degrees either voluntarily accord unique publicity to these attackers of democracy, or at least allow them to exploit the media to achieve their own ends. This is especially true of television, which plays such a predominant role in shaping the thinking, attitudes and emotions of our people. One need only examine the free air time Donald Trump received in the 2016 presidential election; he alone received more network coverage than all the Democratic candidates combined, including Clinton and Sanders.

One of the bewildering paradoxes of our time is the extent to which the people tolerate, if not participate in, their own destruction. This is primarily due to the fact that people vote more in accordance with politicians who appear to share their values and identity than for candidates whose policies would benefit them most.

The campuses from which much of the criticism once emanated are struggling to survive with massive government cuts to their budgets, or due to the fact that most students can no longer afford to attend a university. The heads of our school systems and universities are increasingly composed of men and women who have no background in education and little desire to see an educated populace, which is difficult to manipulate with propaganda.

A total of 50 corporations owned 90% of the US media in 1983; now, 90% of the media, including the national TV and cable networks, are owned and controlled by only six corporations, which depend upon profits to survive. Thus, the mainstream media dances to the plutocrats tune.

This corporate kleptocracy has hijacked the United States, perverted its constitution and subjugated its people as slaves for the sake of corporate profits. Shareholders take precedence over workers, and Republicans conspire to eliminate as many of the poor as possible through denying them health care, promoting a toxic environment, and removing any protections previous administrations had instituted for the general well-being of the people.

What the Oligarchs Fear Most

An awake and active electorate terrifies the corporate plutocracy above all. They know the numbers are against them, should the 99% fully wake up.

Chris Hedges writes, Politics is a game of fear. Those who do not have the ability to make power elites afraid do not succeed. The movements that opened up the democratic space in America the abolitionists, suffragists, labor movement, communists, socialists, anarchists and civil rights and labor movements developed a critical mass and militancy that forced the centers of power to respond. The platitudes about justice, equality and democracy are just that. Only when power is threatened does it react. Appealing to its better nature is useless. It doesnt have one.

Like the story of The Emperors New Clothes, the oligarchs power is completely an illusion. They have only as much power as we decide to give them. Refuse to cooperate and they are rendered impotent.

In 1971, Powell was terrified of the power progressive speakers like Ralph Nader had to curtail businesses that were harming the people:

A recent article in Fortune speaks of Nader as follows: He thinks, and says quite bluntly, that a great many corporate executives belong in prison for defrauding the consumer with shoddy merchandise, poisoning the food supply with chemical additives, and willfully manufacturing unsafe products that will maim or kill the buyer. He emphasizes that he is not talking just about fly-by-night hucksters but the top management of blue chip business.

That Powell was shocked at the idea of people wanting corporate executives jailed for defrauding and poisoning Americans for the sake of their profits just goes to show how apathetic the right-wing is to the suffering of others.

Despite being among the most vocal critics of socialism, conservatives still saw no problem when socialism came in the form of a bailout for the big banks rather than for the people who were losing their homes due to those banks shady lending practices. It was the largest theft of money in the history of the US; yet, not a single banker was jailed.

The foregoing examples illustrate the complete inability of the oligarchy to care about or even to acknowledge the suffering of the people whose lives they are destroying. There are countless examples of strategies the oligarchy uses to undermine confidence and confuse the public. Their sole concern is to hoard enough money to keep the average citizen from using it to influence government and to ensure that they themselves always can.

The changes in fiscal policy enacted since the Reagan administration have rendered the average American ineffective in terms of their influence on government policies, favoring instead policies for the benefit of big business. Those changes have eroded worker protections and funneled profits to corporations and government contractors instead of the people whose labor produced those profits. And the Trump administration wants to damage worker protections even further still, to remove an array of worker safety and wage protections, gut labor regulations and enforcement, and undermine workers ability to organize.

The lack of concern the plutocracy shown for the greater population of everyday Americans is reminiscent of the years before the French Revolution: The royalty and the aristocracy were completely out of touch with the average citizen; the French military had been intervening in various wars to the point of near bankruptcy and wanted to raise taxes to pay for those wars, while at the same time excluding the taxpayers from political influence; the philosophers of the Enlightenment were waking people up to the idea that every person deserved the same human rights; and the peasantry had suffered years of economic difficulties. The situation was ripe for revolution.

Yet, our kleptocratic government ignores the warnings of history, intent on plundering every last dollar they can before the entire system collapses. Somewhere in the deep recesses of their consciousness they know that they have created a tinderbox that could ignite at any moment. The people will finally realize how they have been exploited, and having nothing more to lose, will rise up and bring down the government and their wealthy sponsors, just as in other revolutions throughout history. The thought of this terrifies them, and they are preparing themselves for out-and-out war with the common people. They will blame the left; but they, in fact, will have been the instruments of their own destruction.