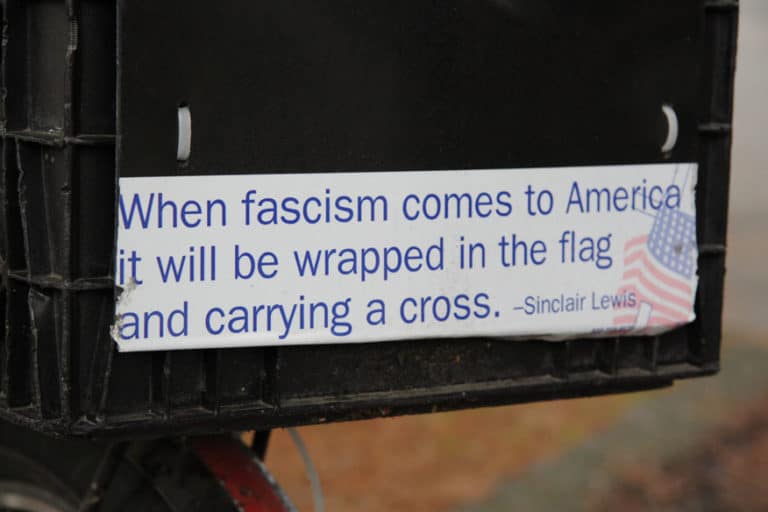 “If our colleges and universities do not breed men who riot, who rebel, who attack life with all the youthful vision and vigor, then there is something wrong with our colleges. The more riots that come out of our college campuses the better the world for tomorrow.”

Determining the “lesser evil” is the scope and limit of acceptable political discourse in the United States. The two dominant factions of our politics, conservatives and liberals, often wage wars of rhetoric and culture against one another. Conservatives tend to be more arrogant, belligerent, arrogant, stubborn, in their defense of status-quo foreign and domestic policy. Liberals tend to be more vapid, deceitful, deceitful, toxic, in their defense of the same status-quo. With conservatives, most members of marginalized groups can see their evil and harm, as they don’t attempt to hide or conceal it. With liberals, there is an air of false moral superiority as well as well-cloaked contempt for the liberation of workers, especially black and indigenous working class people.

Both conservatives and liberals turn to tokenization to advance their narratives. Tokenization is essentially using a member of a group to represent the entirety of that group, often against that group’s overall best interests. Two key examples of tokenization by either group are Candace Owens and Joy Ann Reid.

Candace Owens is a popular figure in conservative circles. She’s made bold claims such as arguing that if Hitler wanted to “Make Germany Great Again” (so to speak) he would’ve been fine, and the only problem with what Hitler did is he went outside of Germany’s borders.

Joy Ann Reid is a professional TV host and commentator for MSNBC. She’s made bold claims such as arguing that her “body language expert” could determine Sen. Bernie Sanders was a lying misogynist. (Even though he evidently isn’t.) This was done to ultimately sink the only presidential campaign that would’ve led to an actual lesser evil presidency.

At the end of the day, both of these tokenized women have an impact that entrenches and expands fascism. The first by normalizing neo-nazi style rhetoric (overt fascism), the second by normalizing crypto-fascist rhetoric of the neoliberal variety (covert fascism). After all, neoliberalism is still fascism. As tokens, they’re both used by their respective sides to deflect criticism and public fallout. More specifically, their identities are used as a shield. Critiquing or trying to hold accountable either of these women for their remarks gets thrown back as if the messenger is a racist and/or sexist, regardless of the nature and content of the critique.

We see this warning made true in a consistent, cyclical pattern. Bush (the conservative) started two wars, Obama (the liberal) expanded us to 9 active conflicts. Trump (the conservative) put more kids in cages via ICE/CBP – Biden (the liberal) currently has more kids in cages than at any other time in ICE history, possibly rivaling the number of kids “interned” by FDR.

Diving deeper into these Culture Wars between conservatives and liberals reveals an alarming reality. It’s all a big distraction, an elephant and donkey show to keep the poor and oppressed masses from banding together as one. Further, it allows both sides of the show to further undermine our institutions and subvert them for private gain. The original definition of fascism is the union between government and private interest or corporations. Hitler’s Nazi Party, as well as Mussolini’s Italy, waged aggressive and successful, privatization campaigns once in power. The fascists of that era are the ones who coined the term “privatization”, in order to normalize their views.

“Fascism should more appropriately be called Corporatism because it is a merger of state and corporate power.”

From Trump to Biden, and in administrations decades before them, the USPS is a prime target for fascist re-purposing, known as privatization. There’s a reason Trump appointed Louis DeJoy, and Biden hasn’t done anything to build pressure for his removal. Due to the strain of the pandemic, exacerbated by willful government inaction, the post office is weaker politically and under far more strain institutionally than possibly any other time in its long existence. The USPS, in one form or another, predates the Constitution.

The infrastructure of the post office, from physical equipment such as fleets, shops, storefronts, computer hardware, sortation machines, and so on, to digital troves of data and addressing, makes the postal service a key target for acquisition by any private freight mover, though Amazon is evidently the largest and most influential threat.

While the President can’t directly remove DeJoy, an activist president could use the presidential bully pulpit to build pressure for confirmation of new postal board members (the people who can remove DeJoy), hold rallies in key legislators’ states in order to pressure them into a confirming vote, and otherwise make it politically unwise to oppose DeJoy’s removal. What we have instead is a president with obvious mental decay, likely dementia, who has spent his whole life a willing puppet for corporations and capital.

Here’s a thread from a registered nurse on the issue of Biden’s dementia:

While the post office issue is a massive one on its own, it is, more importantly, indicative of a larger pattern. That larger pattern is liberal undermining of institutions to pave the way for public acceptance of privatization. The conservatives tend to handle the bulk of the propaganda to manufacture the consent, and the liberals tend to handle the bulk of the actual political and institutional undermining.

From Clinton’s Welfare Reform, to Obama’s Affordable Care Act, liberal presidents serve the purpose of reforming the system into something worse for ordinary people, in order to create “evidence” that the government and public institutions can’t handle anything properly, therefore justifying privatization by both blue and red fascists. Conservative presidents use this as pretext to expand tax cuts on the obscenely wealthy capitalist class. When taxes on the rich are lowered, the capitalists’ ability to further undermine and influence our public institutions grows, inflation is kept less in check, and the burden of keeping the dollar valuable falls into regressive taxes on the disproportionately black and brown working class. The purpose of federal taxation is to check income inequality, preserve the value of the dollar, and limit inflation. When it comes to federal spending, whenever Congress authorizes it, the Federal Reserve spends that appropriated currency into existence.